I’ve gotten on the bandwagon a tad late for this, only finishing season 4 of the series a couple of days ago. But better late then never! Let’s get into the review.

It’s 70 years after Aang stopped the Fire Nation and saved the world, and we’re introduced to a new Avatar, a 17 year old water bender named Korra.  The story is set in a world on the brink of modernisation, Republic City is our focal point, a mash up of East and West architecture and traditions . In this new world Korra faces political upheaval, kidnapping and imbalance.

The 4 Books of Legend of Korra:

The series expands over 4 ‘books’:  Air, Spirit, Change and Balance , with each forming it’s own closed storyline. I didn’t really enjoy this separate style of story telling, looking back on Avatar: The Last Airbender, I enjoyed how the original Team Avatar worked together on side quests but also focused on a larger goal. With Korra, each series followed the same pattern of Korra slowly figuring out what the problem is, trying to fix the problem, failing and then overcoming her previous defeat.  I felt like this is the usual ‘go to’ plot line most tv shows and movies use, and I expected a bit more from Korra.

Book Air featured Amon, a champion of the people who aimed to wipe out bending. We’re shown how those who can’t bend are often ‘bullied’ by those who can, with gangs running rife in Republic City, and ordinary individuals unable to do anything about it. Korra , on top of the pressure of dealing with the ‘equalist’ uprising, must also adjust to the political climate of Republic City and learn airbending. Overall the storyline for this season was really enjoyable. It was interesting to see Korra learn about the inequalities and divide in Republic City, as well as harsh reaction to it. It was unfortunate that the season only had 12 episodes, I would’ve liked a deeper look into how far these inequalities branch.

In Book Spirits we’ve got civil unrest and tensions. Spirits are running rampant and Korra, without her connection to the spirits, is caught between the teachings of Tenzin and Unaloq’s (her uncle). On top of this she must also solve the conflict between the Southern and Northern water tribes, as the Northern water tribe ‘invades’ the South, added to this is the family element of her uncle (Unaloq) and her father (Tonraq) being leaders of the Northern and Southern tribes respectively (Awkward!). I felt this was a major step up from last season, I enjoyed how Korra was torn between mentors and also her own frustration at not being able to be the ‘perfect’ Avatar. My favourite part of the series was seeing the first Avatar – Avatar Wan and his journey to becoming fused with the elements and Raava (the spirit of light).  As I mention below I would’ve liked Korra to have some kind of ‘awakening’ in this season, rather than have had to wait until season 4.

Book 3 (‘Change’) is by far my favourite – this is the kind of action and story I’ve been waiting for the whole series. Korra is adapting to a new world where spirits and human learn to co-exist, and the appearance of a new generation of airbenders, but there’s also a new threat. 4 master bender criminals: Zaheer, P’Li, Ming-Hua and Ghazan are after the Avatar to create a new world order in chaos. I actually think Zaheer stole this season for me, he had such an amazing character and was so intriguing I just wanted to watch episode after episode to see what he would do next. He was one of the most terrifying villains in Legend of Korra, not only because of his strength, and that of his team, but also because of his unwavering dedication to his cause. I also really liked the introduction of Zaofu – the Metal City. I thought the design of the city was innovative and interesting. The dynamics of Team Avatar were at an all time high in this season, and I actually enjoyed Bolin’s jokes (which is rare). Overall this was the best season of the series – great action, great characters and great story!

Balance (Book 4) takes place 3 years after the events of Book 3. Korra, still recovering from her fight with the Red Lotus, struggles to reconnect with her avatar spirit. Behind the scenes, Kuvira, the uniter of the Earth Kingdom after the events of Book 3, plots to become its ruler (more like dictator). I thought the character development in Korra, Varrick, Zhu Li and the Beifong sisters was amazing this season. The events that took place humanised these characters and brought them into a new light – I only wished this had happened sooner. Especially with the hopelessness and frustrating Korra felt, this would’ve been an amazing turning point for her character in either season 2 or early season 3. Overall, while this season featured some great character development, I felt it was a major let down from Season 3. Kuvira had big shoes to fill, following the Red Lotus, and unfortunately she didn’t quite make it. However as I say that, I found the end of Legend of Korra to be extremely heart-warming – I may have shed a few tears.

While each ‘books’ story line by itself was incredibly interesting I thought some swapping around of books could have helped the story flow a bit more. If book 2 and 3 had been combined into an over-arching theme and with book 1 and book 4 acting as side plots I believe the series in general would have been more interesting and enjoyable.

New Team Avatar and others:

My main problem with the characterisation in The Legend of Korra was I felt that the characters were ‘made’ to emulate the characteristics of the original Team Avatar. Bolin was the new punch line, Asami was sweet like Katar and Mako was moody like Zuko. But not only were they like characters from Team Avatar, they were worse versions of them, Bolin and Mako in particular were frustrating beyond belief. Bolin was self-centred and ridiculous, and Mako was uncaring and an unlikeable Cassanova. I honestly was hoping that by the end of season 4, they would receive a major revamp of their characterisation, like Korra had, but unfortunately no.

I think the biggest disappointment for me was that the descendants of the original Team Avatar weren’t as well adjusted as I’d thought. Each character was pretty much repressing some resentment to their parent, particularly Aang and

Toph. It was just surprising as I’d grown up thinking that Aang would be one of the greatest Dad’s ever only to see him neglecting his other two children to teach his one air bending son his culture, only to create an unachievable goal of being this amazing spiritual air bending master.

It may seem like I extremely detested the characters in Avatar but some of the side characters were fantastic. I particularly enjoyed the comedic dynamics of Zhu Li and Varrick. I also liked the animal side characters. Perhaps my favourite characters were the 3 air bending grandchildren: Jinora, Ikki and Meelo. Especially during the first season, they kept me attached the show and offered some light session of comedic relief.

Perhaps the most rewarding part of the show was seeing the transformation of Korra’s character. At the beginning of the show we see her as an arrogant nothing-can-touch-me brat, but through the books she transitions from this to frustrated at her abilities to feeling weak and demoralised and finally becoming a strong, wise Avatar. I felt this development of Korra’s character emphasised her humanity and also acted as an inspiring message to viewers – to not be scared of their weaknesses and to learn a lesson in every defeat.

I also wanted to applaud the creators of the show for their entourage of amazing, strong Female characters. Just like in Avatar, all the female characters in Korra can hold their own, while I wasn’t so keen on some of their personalities I was thoroughly impressed by Asami and Lin Beifong’s fighting styles.  Furthermore props to Asami for running her own company and essentially being not only a business leader but also a technological genius, and Suying Beefing for essentially creating an entire state of the Earth Kingdom and being it’s matriarch.

Animation/Art: Overall I loved the amount of detail that went into the animation this series. Fight scenes were done so well – think ‘Shingeki no Kyojin’ jumping around. The art of the series was breath taking, new cities such as Zao Fu took my breath away – there was so much detail and thought put into them I could imagine them being real life cities that I could visit. 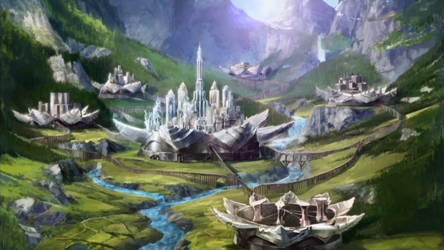 Zaofu: Home of the Metal Clan

Overall I would give this series 7/10 – While the series was enjoyable with some great characters and amazing designs, it didn’t quite match up to the same standard as Avatar the Last Airbender. For most of the series (except season 3) I was just aching to get some of that quality characterisation and action seen in the original Avatar. I think the main problem with this series was it took me so long to warm up to the characters. Despite this I am looking to the next series of Avatar (if there is one!) and I’ll definitely be on the look out for the Korra comics coming out later this year :)!

Award for most bad ass character:

Tie between Asami  and Suyin Beifong

Award for most frustrating character:  Earth Prince and Bolin

Award for character who had to put up with the most shit:  Zhu Li

7 thoughts on “Legend of Korra Review!”