Spring has just begun over here in Australia, and what better way to start the season than to look at some cute romance one shots? But rather than look at typical romantic stories, I thought I might write about a few that I’ve read recently which are a bit different, and provide a twist to the genre.

Unfortunately The reviews on each of these one shots are short because I didn’t want to give too much away about the story.

The Girl On The Other Side Of The Glass (Unita Yumi)

Every morning on his way to work, Takahashi passes by a woman in the subway walk – separated by a thick sheet of glass they never actually meet. Despite this, Takaha

shi becomes fascinated by the woman. Slowly, he tries to convey his feelings across – but
will they ever reach her?

I actually really liked the idea of this one shot – two people continuously passing by one another, never meeting, but always looking at the other. I found both characters, and the way they tried to interact with one another really charming. It’s  really great one shot to read when you just need a quick escape.

Rinko Souma is in love with the handsome, popular boy in her class (Souta Hisakawa). With little self-confidence and a shy personality, she can’t imagine ever talking to him.

One day, she stumbles upon a video rental store which allows one to ‘rent’ the heart of someone else. What will she do with this power over Hisakawa, and more importantly, what are the consequences?

I absolutely love horror and psychological manga, so this one shot was a blend of those with some bittersweet hints of romance. I really enjoyed this one shot, in about 30 pages it managed to delve into the darkest of human emotions – desire and obsession – and discuss their outcomes. Seeing Rinko’s descent is a moral tale on obsessive love, one that lingers in the reader’s mind.

Shinohara Sumi is stuck in supplementary lessons during her summer break. While working through some worksheets,  a mysterious boy appears, jumping through the window, saying he’s known her since the year before. The summer passes quietly with him tutoring her – but who is he and why does he look

Technically, this is a Summer romance one shot – but it was just so sweet I had to put it in here! Readers are able to gain a real sense of the character of Shinohara, and also the progression of the relationship between her and the mysterious visitor. Overall it’s a very endearing and lovely one shot.

Sora Onodera has just turned his older brother into a hedgehog! It’s after this that he learns that his family can use magic, and that his magic abilities have started after fulfilling the condition of having his first love. Now to break the spell , all he must get his love to confess to him (easier said than done)!

This one shot is a really sweet, silly one. Sora is constantly saying the wrong thing and causing misunderstandings, he can barely say anything nice to her. Typically seeing a character so painfully trying to convey their feelings frustrates me, but the comedic overtones of this series as well as the brother as a support, really made this worth it. This one is a great read for when you just want to chill out and read something short and cute – although prepare for many face palms!

So I read this last night thinking it was a one shot, but found two more chapters this 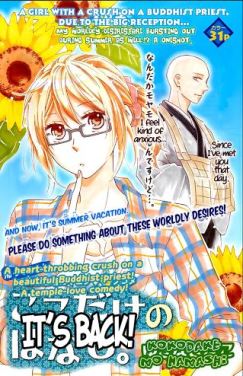 morning (was very excited!) Despite it having 3 chapters I’ll still include it 😛

So I’ve saved the best till last, as I mentioned above, I read this comic last night and immediately fell in love with it, it’s probably one of my favourites now. Izumi is a 19 year old University student who loves to see a man in uniform. Her obsession has gotten to the point that it’s freaked out her boyfriend, who eventually dumped her. To mend her broken heart, her friends organised a trip to Buddhist monastery – hoping that the calming environment will allow her to reflect on her choices. But rather than that, Izumi begins to fall in love with the beautiful monk, Shuujin.

This series is an absolutely hilarious read. It’s so rare to find a female character in pretty much any manga series so unabashedly proclaim her thoughts and love.  It’s

such a refreshing change! What I probably like most about this series is that rather than just being a straight comedy about how outrageous Izumi is, it provides real moments of introspection, as Izumi looks at who she is as a person and her feelings towards Shuujin. I really liked the backdrop of the monastery as well as the moments between Izumi and Shuujin. Their relationship is not only one of beating hearts and blushing – Izumi undergoes some very real character development through her talks with Shuujin. She becomes more confident in herself as well as aware of those around her. This series isn’t just a sappy romance story, but one of maturation and understanding.

Hope you enjoyed reading through these mini-reviews! If you have any recommendations or comments please let me know 🙂

2 thoughts on “Romantic One Shots with a Twist”