It’s been a great year of Film in 2015, so I thought I might sum it all up in one post of my top 5 favourite films of the year. However, some films of 2015 I have yet to see such as ‘Joy’ (which I probably won’t see for a while) and others have been released in America but will be shown in Aus in early 2016 – so I may miss a few good ones.  Let me know what your favourite films are for the year in the comments :)!

When I originally wrote up about the film I wasn’t too impressed with the story. Ultimately it had too many elements crammed into a 2 hour film. But what makes this film one of my top 5 is the stunning art and set designs of the film. Each of del Toro’s films is like looking into another word, or a part of his fantastic imagination. Audiences can feel both the beauty and horror with the young protagonist’s new home. They revel in the fear of the ghosts, and hope for the main protagonist’s safety.

Set in the not so distant future, ‘Ex-Machina’ is a film that forces audiences to question what it means to be human. A young programmer working a multi-million dollar company wins a competition to spend a week with the company’s CEO. At the first it seems like the opportunity of a life time, he helps the CEO test a new type of technology – a would be sentient robot – but not all is what it seems. The programmer is soon thrown into a terrifying battle of truths and lies.

At the beginning of the film I wasn’t too sure abut it. But soon being thrown into expansive landscapes combined with new technology, the film got me hooked. The characters are incredibly human – both understandable and reproachable. Audiences are thrown into the conflict over the A.I. named ‘Ava’. Ultimately left feeling conflicted over the film’s chilling end.

3.  Inside Out, directed by Peter Docter & Ronnie del Carmen

I’m always a big fan of animation films, and this one really knocked it out of the park. The film shows that everyone has 5 main emotions, ‘Joy’, ‘Sadness’, ‘Anger’, ‘Disgust’ and ‘Fear’. Riley is a sweet, family-orientated, happy 11 year old girl, mainly that way due to the control of her main emotion Joy. Unfortunately when she has to move to another state, all the emotions are in chaos. Things only turn for the worst when Joy and Sadness are thrown out of the main control centre, and must find a way back before Riley does something drastic. 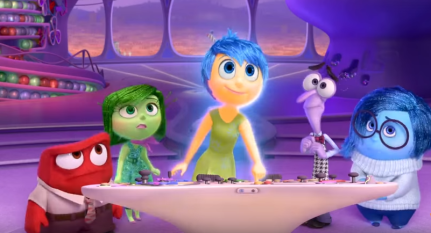 I absolutely loved this film. The personality of the different emotions were fantastic, and I loved the little bits and pieces that were in Riley’s head such as her ‘Imaginary boyfriend’ and the Dream studios. Riley and her parents were fantastic characters. The story was great with lots of twists and turns, leading to a final acceptance and understanding of the different emotions.

2. The Dressmaker, directed by Jocelyn Moorhouse

So I’ve already done a review of the film here. But essentially ‘The Dressmaker’ is a revenge-comedy film, where an Australian fashionista returns to her outback town. Through the film she  searches for the truth behind a murder she was accused of as a young child and learns the secrets of the townspeople.
This film was visually spectacular. From the designer dresses to the shots of the Australian outback, the audience could not get enough. This combined with the colourful characters of the main character, her mother and the local police officer, made this film a must see. It’s a triumph in Australian film making.

Not only is this film my personal best for 2015, it’s become one of my all time favourite films. The film is set in a post-apocalyptic world, a man named Immortan Joe has a monopoly on the water supply, and is worshipped as a god. The film follow his five ‘wives’ as they escape from him, with the help of his lieutenant Furiosa and Max (although Max doesn’t really do anything).

This film was an absolute break through in portraying female characters. We learn about the ‘wives’ pain and suffering at the hands of Immortan Joe, without it being graphically thrown in our faces. What’s even better is that these women are shown as survivors, not passive victims.

On top of this, the film itself is fantastic. There are stunning shots of the Australian outback, the world that is created through the story is both vivid and horrifying. Ultimately this film  demonstrates women’s strength and survival, but doesn’t take itself too seriously. I mean with a flamethrower guitar, how can it 😛 ?

Furiosa was definitely the most kick ass female in this year’s films. In a post-apocalyptic word, where women are no doubt suffering she climbs to the top on Immortan Joe’s hierarchy to be his top imperator and drives his war rig. Despite being in a position arguably better than others, she doesn’t let what is right slip past. She escapes his clutches, and saves his ‘wives’, knowing full well the pain she will endure if she is caught.

Furiosa is a strong and powerful female character. Definitely my favourite scene with her was when she used Max as a stand when she was shooting the rifle. In this scene, Max, just as the audience, respects her as the better shot. Her abilities are not confined by her gender, she is truly a well rounded character, respected for her skills.

So ‘The Visit’ wasn’t one of the best films of the year, even though I enjoyed it immensely. But I have to give a shout out to Ed Oxenbould who played one of the lead characters. I absolutely loved Tyler from ‘The Visit’. He was this cheeky little boy who kept his humour while going through both a tough time with his family and ultimately in the struggle for his life.

Oxenbould made me laugh throughout the film. Ultimately without his glow and charm I doubt I would have enjoyed the film as much as I did.

Hope you enjoyed reading through it all! Hope everyone has a Happy New Year! See you all in 2016 🙂