Check out my new travel blog at Merry Adventures Blog!

Classes in the program finish at about 4pm, so it’s a perfect time to take a shot trip somewhere and explore. Me and a couple of girls from Arts and Crafts had heard that Itaewon was an interesting place to check out, so we figured why not? When we arrived we were pretty hungry so we quickly went into a restaurant and got some food near the station. While heading to the restaurant I noticed a massive store completely dedicated to the ‘characters’ in the messaging app ‘Line’.

I had come across Line a couple of times, and had previously thought it was a Japanese company. Later I was told it was actually a Korean company but was just more popular in other Asian countries, while Koreans use Kakao Talk. The store itself is about 3 levels high, with the top level being a special photo opportunity level and a cafe. Unfortunately we didn’t get to stay for any of the food. 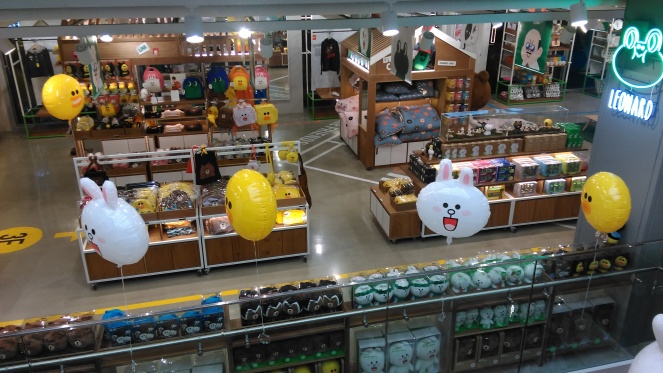 There’s lots and lots of merchandise you can buy. My favourite Line character is ‘James’ – so I managed to buy a notebook with him on the cover and also a small statue of him. There’s so many awesome things to see within the store. Definitely worth a look if you’re a fan of the messaging app. I’ve heard there’s a similar store for Kakao Talk so hopefully I’ll be checking that one out soon 😛

Oh also! If anyone has any suggestions of things to do in Seoul, like a big day trip or anything, please let me know ^_^!