Check out my new travel blog at Merry Adventures Blog

COEX Mall is one of the major malls in Seoul, featuring a number of designer brands as well as a large cinema and aquarium! The mall is also just below SM Town – where you can grab all your SM Entertainment K-pop goodies! The best way to get there is to head to Samseong station and head out of exit 6.

SM Town was definitely an experience! In front of the building, workers were putting up cartoon cut outs of EXO members, the same cartoon versions were being marketed on special lipsticks and hand cream. (Sorry I lost the pictures of the figures when my phone died, will update this if my phone gets fixed!) Inside SM Town there were a few main areas. One area showed all the awards SM Entertainment had won, there was also a massive store where one can buy pretty much anything with their favourite group or artist on it. Further levels up featured a cafe and even a special star zone. You can pay about $250 and get the full star treatment – a makeover, and some professional photos, to (hopefully) begin your Kpop career.

After having a quick whiz around COEX, I met up with some other friends to have a look

around the aquarium. The aquarium was surprisingly big, and I quite enjoyed it. However after being to the Hong Kong Ocean Park a few years ago, no aquarium has ever lived up to the standard. My main concern about the aquarium was that some of the tanks looked a bit too small. There was an Amazon exhibition where they had a small monkey (for the year of the monkey). The poor monkey was kept in this cage which was no bigger than a shower.

Another part of the aquarium had a section where you could put your hands in small tanks and touch some sea life. I felt incredibly uncomfortable during this section. There were 2 main rules here – firstly you should touch the creatures gently, and secondly do not take them out of the tank. The guard who was meant to make sure people followed these rules was off in his own little world. So people were doing whatever they wanted to the creatures! I saw a man chuck something that lived in a  shell back into the water. His girlfriend kept touching and squeezing  a fish in another tank that it actually died! 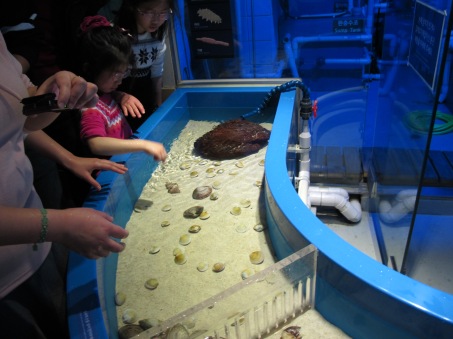 On the last tank there were some sea slugs (or sea slug looking creatures). As my friends and I headed there, there were two boys about 6 and 10 years old. They were lifting the slugs out of the water, and squeezing them as hard as possible – literally the slugs innards were coming out! I ended up yelling at these two boys because I was so disgusted by their behaviour. Their parents were no where in sight and the security guard was just leaning on a wall staring at the ceiling!

Despite most of the aquarium being very interesting, and some exhibitions being presented very well. I was very disgusted at these two instances and did not really enjoy my time at the aquarium.  SM Town is definitely worth a visit if you’re a big K pop fan though!

2 thoughts on “Some Kpop and Fish! A visit to COEX Mall : Seoul Adventures”