The Sydney Horror Movie campout was held over the weekend (12th-13th March). The event was held about at Mt Penang camp grounds, beginning at about 4:30pm and ending the following morning at 9:30am. I’d been pumped for this event for the last month, and was ready to get amongst it and have a freaky weekend!

To actually get there was a bit of a tumultuous event, my friend’s car (that was gonna get us there) actually broke down and she had to change the battery. Cue a couple of anxiety filled hours and then relief as it was all fixed up! We were then on our way. We arrived at the camp groups at about 6pm, and it was already there was a fantastic turn out. On the Facebook page, it advertised that there should be about 1000 people at the event!

The event was divided into 3 main areas, there was the general sleeping area, the ‘glamping’ area and the actual screening place. My friends and I had a dished out the extra money for the ‘glamping’ (glamorous camping) experience. We were given a pre-set up camp, which was right by a small pond, and also had separate glamping camp area toilets. After leaving our stuff in the tent we quickly set about having a look around. 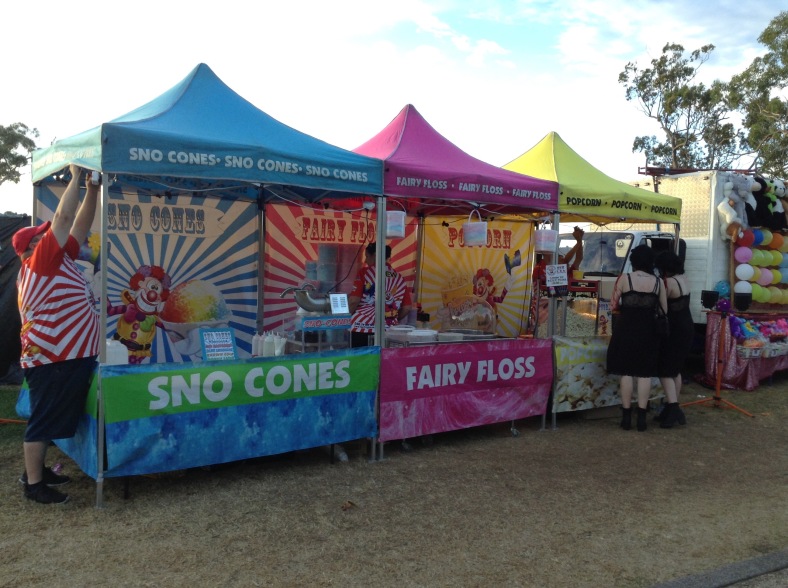 We first came across a small games area which had pop the balloon and also some snacks like popcorn and fairy floss. Next to this was a general food area -which we went back to later to grab some dinner. I got some sliders – 3 mini beef burgers, chips and a bottle of water ( I was mega hungry!). Near the actual screen was also a free make up station – I wish I hadn’t done my make up at home, since they probably could’ve made me look even more scary!

Since we were there so early we managed to find a space relatively close to the screen. As we sat enjoying our meals, there was also live music. Most of it was heavy rock. I quite enjoyed it, until the last band came on. By that point it was about 7:30pm, and I was about ready to watch some films! After enduring the final band, the key singer popped a champagne bottle and the cork came flying at me! It was quite a souvenir!

Conjuring’. For the weeks leading up to the event, attendees voted on what films they wanted to see, I was bit disappointed because I had actually voted for the original ‘Texas Chainsaw Massacre’ and also ‘The Blair Witch Project’. Since we were quite close to the screen we were able to lie down completely, and whenever there was a scary moment I couldn’t deal with, all I did was stare at the stars!

Between films we also watched some short horror films. Some of them were incredibly creepy. I’m blanking on their names, but there was one incredibly good one about a lady who just moved into an apartment. She found a camera left behind and started snapping pictures, seeing a strange woman in each of the photos, slowly coming closer and closer to her. You can imagine the rest, but seeing as I had the exact same camera and love taking photos – that one is gonna haunt me for a while.

The best part of the event was seeing how people had dressed up. There were some paid actors going around dressed as Freddy Krueger, one guy was dressed as this horrifying clown. While the bands were playing he was on the roof running around, during Nightmare on Elm Street he even lit himself on fire!

Probably my only concern with the event was that to get to the regular toilets you actually had to go through the horror maze. The maze would have been fun, if the smoke hadn’t made it so you couldn’t even see the fingers in front of your face! The other frustrating thing was that rules such as no smoking were not enforced. There was a lady sitting near me smoking for most of the first film and it was quite annoying. The other thing was that it seemed the bars didn’t really take notice of stopping people from drinking, the number of drunk people at the event was ridiculous, considering this a film campout not a music festival.

From the Facebook event I can also see people who sat towards the back complaining about the sound from the music area being too loud. So much so that they couldn’t hear the second film at all.

Overall I had a fantastic time during the camp, some parts of it could have been better organised. It especially would have been nice to have the bands not play for so long and maybe even an information desk. But if I have time next year, I’ll definitely be back!

5 thoughts on “I survived the Sydney Horror Movie Campout!”