When I opened this manga up, I realised that I had read the first chapter before. I couldn’t quite remember it, so figured I’d give it another shot. Half way through the chapter I realised exactly why I had quit. YET, I still went on to read another 6 chapters for the purpose of this review. So, without further ado, let me introduce you, my dear readers, to the misogynistic BS manga of the year, by Aihara Miki! For the purpose of this review I will only be discussing the first story (the series’ first 5 chapters), because I honestly couldn’t stomach reading any further.

Sakuraba Junko is a 27 (going on 28) English teacher in Tokyo, her dream in life is to live abroad and immerse herself in Western culture. Yet, her family is more concerned with her settling down. They set up an omai (arranged marriage interview) for her and Hoshikawa Takane(who is a Buddhist priest). Sakuraba refuses, but Hoshikawa is  damn persistent and even shows up to her language school to enrol as a student! So that’s pretty standard for a romance manga, there’s some really romantic bits. Such as when Sakuraba has no one to celebrate her birthday with, and  Hoshikaw a buys her a bunch of flowers. But there’s also some ridiculous parts where he just insults her for no reason. Just attacking her dreams and self-esteem for no reason other than to make her think that her best option is to marry him.

So in chapter 2, Sakuraba moves in with Hoshikawa because of reasons (literally never explained). This is when all the crazy possessiveness begins happening. Hoshikawa begins talking about locking Sakuraba up – he doesn’t want her to go to work or hang out with any guys. Especially her long time best friend – literally to the point, she’s about to hang out with her male best friend and Hoshikawa physically drags her into a taxi and refuses to let her call her friend. Lord knows why, but somehow Sakuraba is taken by the fact that Hoshikawa really likes her and says she speaks English beautifully. The manga continues to dig itself into a hole as Sakuraba makes Hoshikawa agree to letting her keep her job and not forcing her into marriage – but in a way that’s like “I’ll sleep with you, if you agree to this” – which is pretty damn concerning.  Can I remind you that this guy is a Buddhist monk! Why the heck is he acting this way!?

Ok, now here’s where the manga really took the cake in terms of being ridiculous. Hoshikawa actually LOCKS Sakuraba up. THIS BUDDHIST MONK LOCKS UP THIS POOR WOMAN!  So she’s locked up, and he’s waiting outside the door – because she’s scared of being by herself. YET, Sakuraba is worried that ‘poor’ Hoshikawa is going to get a cold by waiting outside for her. The next morning, Hoshikawa’s mother walks near to where Sakuraba is held captive  – but oh no Sakuraba doesn’t scream or shout for help. Her feelings for Hoshikawa are strengthened when she hears that he specifically chose her and fell in love with her. When Hoshikawa questions her she literally responds “I don’t hate being locked up in here” and promises to marry him. 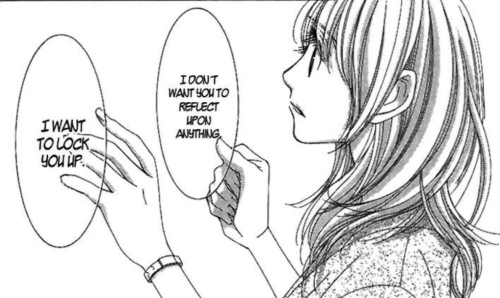 The later chapters are focused on different couples, From what I’ve skimmed it seems she still refuses to marry him. But they’re relationship is treated as more like a running gag. It’s honestly so disappointing to see a manga series treat female characters is such a way and romantic such behaviour – it’s romantic when I man is possessive and doesn’t want you to see other men, it’s romantic when he locks you up, it’s romantic when he tells you to give up on your dreams. I’m honestly so disgusted by this series, and I highly recommend anyone considering reading it to take a step back and find something else.