Over the years, the number of Pop Culture events has slowly increased in Sydney. The biggest by far is still ‘Supernova’. The Supernova Pop Culture Expo goes to most of the capital cities in Australia and has been running since 2000, the event usually goes over 3 days (half of Friday, and all day Saturday and Sunday). Unfortunately, the Sydney event usually runs mid June – right in the middle of University exams! So I haven’t been to one since 2013, however now that I’ve graduated, I finally had a chance to visit one of my favourite events of the year.  The Sydney Pop Cultural expo is held at the Olympic Park Showgrounds in ‘The Dome’. The easiest was to get there is to catch a train to Lidcombe and then catch an express to the Olympic Park station.

The ‘weekend’ pass for the whole event costs $70 pre-purchased, and $28 pre-purchased for Friday, and $32 pre-purchased for Saturday/ Sunday. The real kicker for the event is the pricing to meet your favourite celebrities. This year Travis Fimmel (who you may know as Ragnar from ‘Vikings) came, a photograph with him costs $80, for John Jarrat (Wolf Creek) a photo was  about $40. Autographs with the stars, was $10 cheaper. 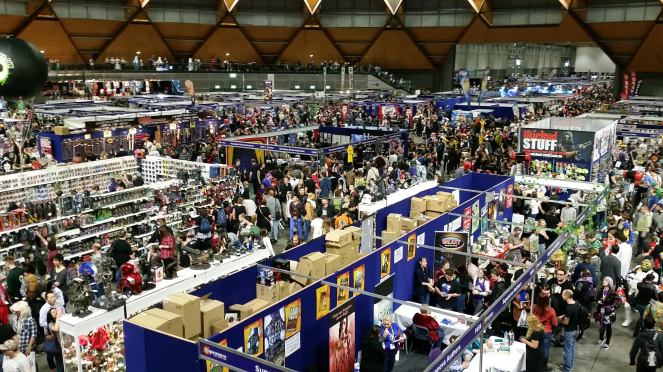 So the most exciting part of the convention was the Artists Alley – essentially this massive section where you can buy heaps of fan art. There was an anime screening room which showed film such as Cardcaptor Sakura Movie and The Boy and the Beats. There was also a seminar room for talks, cosplay theatre, imagineers playground and Magic The Gathering play zone.  Inside there’s heaps of cafes, and toilets. The lines for the cafe goes really quick, but dominoes also has a stall if you’re craving some pizza. 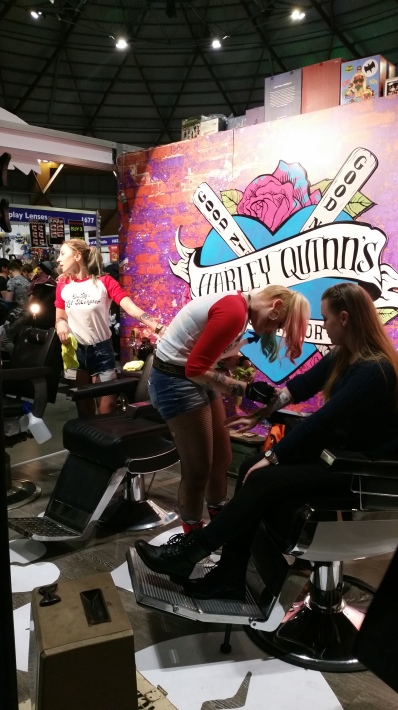 Another really great section was the ‘Harley Quinn Tattoo Parlour’. The section was giving free temporary tattoos with ‘Suicide Squad’ designs. I got one of Katana and my friend got on of the ‘Joker’. The tattooists working there were all dressed as Harley Quinn, and were so sweet and friendly!

My favourite part of Supernova is seeing all the amazing cosplayers! People put in so much effort into their outfits. I saw one couple dressed as Mad Max and Furiosa,  a group of Disney cosplayers and even a Baymax! One of my favourite outfits was this guy who had handmade and designed his entire costumes  as an original character.

I also mentioned to head to two seminars – the first was one about the ‘Rise of the Antihero’ which featured 4 authors. The seminar went for about an hour but I only stayed for about 30 minutes. The beginning started off really good, but halfway through they started discussing female anti-heroes. Now I’m all for bad ass female characters, but one author talked about how her female anti-hero was an anti-hero because she used the male character as a sex slave and then left the guy to be tortured to death. I found this incredibly troubling and didn’t really want to stay. The second seminar was with Benedict Samuel, who played the Alpha Wolf in ‘The Walking Dead’. Benedict was so sweet and lovely! I came really late and asked a question that had been discussed before but he still answered it and was so kind – haha I think I developed a little crush on him ❤ !

The amount of products on sale were amazing ! There were a few companies such as Madman selling DVDs on sale – for example Miyazaki DVDs were $25 each. Again, I loved Artist Alley, I literally spent so much money buying fantastic fan art. I’ll be making another post on a Supernova haul! There were heaps of figurines on sale, as well  as some fantastic jewellery. There were even Pokemon evolution stones on sale!

Supernova is, and probably always will be, one of my favourite events of the year! It’s literally Christmas come early for any pop culture fan! No matter what you like, you’ll probably find something here. I even saw a store selling ‘Geeky’ coffins!

If you went to Supernova – how did you find it? If you go to other conventions, what are they like? Also more importantly, how do you keep in check your spending? I’ll be eating a lot of two minute noodles for the next month!