So with one season over, another season begins. I’ve got quite a few series that I’m excited about this season – notably the new Danganrompa series and also 91 days. I won’t be reviewing all the series that are coming out this summer – some I know that I just won’t like – such as harem series or really intense shojo ones. But I shall try to watch as many as possible. At the end I’ll let you know which ones I’ll be keeping up with 🙂 You can check out the full list of summer anime series at Anichart. Just a quick rundown of my voting scales: 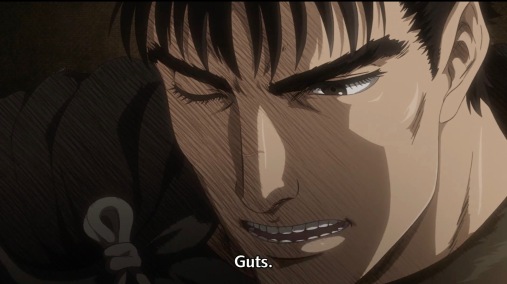 The ‘Berserk’ franchise began in 1989 with a manga by Kentaro Miura. Roughly ten years later, there was an anime series, followed by films in 2012 and now a new anime series in 2016. The series follows Guts as the ‘Black Swordsman’, which was briefly alluded to in the previous recreations of his character. The idea of the series follows Guts as he tracks down his former leader, who sacrificed their mercenary group, to become one of the ‘God Hand’. The ‘God Hand’ are… well kind of hard to describe, but lets just go with evil and not the kind of people you want to hang with.

The new ‘Berserk’ series also uses a different animation style -CGI. While I do applaud the animation studio for trying something new, I found it really hard to adjust with the new style. Some parts of the episode looked really amazing – buildings, forrest, blood and gore. But the actual character design wasn’t the best, Guts sometimes just looked like he had a really intense derp face. I’ve really been looking forward to this series, so will give it a few more episodes to see if I can get used to the CGI animation.  3/5 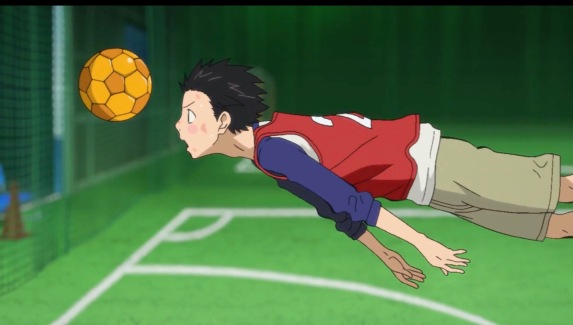 ‘Days’ is a series that follows Tsukushi Tsukamoto, an incredibly shy boy, as he begins his high school life. He is invited by a fellow classmate, Jin Kazama, to a futsal match. The match ignited Tsukushi’s love of soccer, and joins his High School’s soccer team. His perseverance against all odds inspires fellow characters to try their best.

So I originally don’t watch much sports anime. The only series I’ve watched is ‘Eyeshield 21’ and I really enjoyed that from how crazy the characters were. I’m also not the biggest fan of soccer in the first place. I didn’t really mind this series, but there were some aspects that really irked me. First I found Tsukushi to be quite frustrating, he couldn’t introduce himself in class and is continually thanking people and acting like he’s such a burden on everyone. I also couldn’t quite relate to the idea that because Tsukushi is trying his hardest – that then inspires everyone else!?

In terms of the animation, the soccer action scenes were done incredibly well. One thing I did notice was that there were large pauses focuses on character’s faces when anything happened. I felt that this was unnecessarily long, you only need a pause for a second or so! It was also overdone. Another small aspect was the pink cheeks on Tsukushi’s face, don’t know why, but I found them incredibly distracting! Overall it wasn’t the best, but it wasn’t terrible, I might give it one more shot.   2.5/5 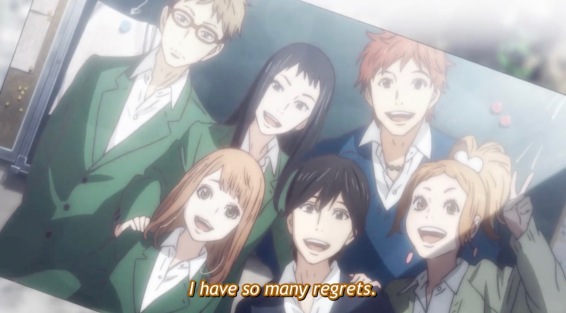 High schooler Naho Takamiya receives a letter from herself 10 years in the future. The letter details the events of the current day such as that she would oversleep and there would be a new transfer student. Her future self also includes instructions on how to avoid the events that she would still regret 10 years later. The series is based on the manga of the same name by Ichigo Takano.

I actually really enjoyed this episode, and hopefully will enjoy the rest of the series. It created a really fun atmosphere with the group of friends while also having the underlying mystery of the letters contents. It’s the kind of series that brings a smile to your face from how wonderful and silly the characters are. It will be interesting to see if Naho’s character develops a bit further, at the moment she’s a bit bland. The opening and ending themes are great, as are the music used through out the episode. Definitely looking to be a really fun slice of life anime!  4/5

That’s it for now! I’ll definitely be keeping an eye on the ‘Berserk’ series, I hope I get used to the CGI animation. I’ll also be continuing ‘Orange’. While I didn’t mind ‘Days’, I don’t think I’ll be continuing it, as I didn’t absolutely love it and have limited time.  I’ll try to write a episode summaries every 3 weeks, but we’ll have to see how I go :)!

What do you think of the Summer Season anime so far? Which one are really excited to see?