Welcome to part 3 of the Summer anime first impressions series! You can read all about my thoughts on other series here  Part 1   Part 2.

To recap: I won’t be reviewing all the series that are coming out this summer – some I know that I just won’t like – such as harem  (even reverse harem!) series or really intense shojo ones. But I shall try to watch as many as possible. At the end I’ll let you know which ones I’ll be keeping up with

You can check out the full list of summer anime series at Anichart. Just a quick rundown of my voting scales:

Handa Kun is set 6 years prior to Barakamon, and follows Sei Handa throughout his high school life. While being admired by his peers, and adored by his female classmates, Handa kun mistakes this as contempt and bullying. This misunderstanding leads Handa kun into crazy events much to his frustration. Episode one features Handa kun receiving a love letter, which he mistakes as a letter of challenge! 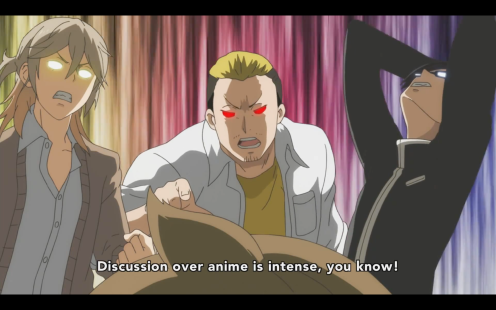 The first half of the episode is dedicated to the Handa appreciation squad. It’s a gag segment where they missed the first episode of the anime and are trying to recreate it. It was quite funny, but I felt went on for a tad too long (9 minute). It was an interesting set up to the episode though. Other than that I really did enjoy the first episode. I normally don’t laugh out loud very hard when I watch anime, but I was laughing so hard watching this! I even had a cold, and still was laughing. Overall a really great first episode, can’t wait till next week!  5/5

Haru, a college student, as thrown his shoulder out and can longer do judo. His best friend, Kazu,to cheer him up, and also wanting to follow in his parents footsteps, sets up an all male cheer squad. Haru realising that he enjoys cheering people on, and the ‘power’ of  his cheer agrees. Together, they cheer right into people’s hearts – no judgement for the cheesy line.

I’ve also been really impressed by cheerleading as a sport, it takes incredible skill and dedication. It’s also one of the most dangerous sports. So when I saw this anime I was pretty quick to jump on it. It didn’t disappoint, to compare to Days in my previous review, I found the characters here a lot more fleshed out. They had clear goals and passions, and also the gags flowed seamlessly. It might be the second sports anime I ever watch! Looking forward to more episodes 4/5

Damn anime, back at it again with the 7 deadly sins!

Mahiru Shirota is a 15 year old student who loves simple things and hates complicated ones. He considers regret complicated, so when he sees a black cat on the side of the road he takes him home, and names him Kuro. Kuro turns out to be a vampire, and Mahiru is pulled into a war amongst 7 deadly vampires and their 8th sibling.

Not as cute as my Kuro 😛

The idea of the series was really interesting. Vampires called Servamps form a contract with a human master. They only drink blood from their master, and have to follow their every order. I only had one frustration with the show was that characters had little ‘catch phrases’ that they kept repeating. Like Mahiru kept saying he likes simple things every couple of sentences, and Kuro kept saying “that’s so troublesome I could die”. It got really old real quick. Other than that the animation was pretty good, but the music wasn’t anything special. Would be interesting to see how the plot develops. 3/5

Hanae Ashiya is about to start his high school life, problem is, he can’t even get past the front gate! After helping a soft toy, that turned out to be a yokai, the demon has attached itself to him and slowly sucking up his energy. With no where to turn, Hanae seeks the help of a moody exorcist, Abeno. With Abeno he finds out that the spirits are not as terrifying or malicious as he thought.

This series has a really strong Netsume Yuujinchou vibe, combined with music similar to that of Spirited Away. I really enjoyed it. The drawings and animation are nothing special. But I was really drawn to the unique take on demons, and the really soft and easy atmosphere of the anime. 4/5

I don’t even know where to start with this. Onara Gorou is a short anime focused around the power of farts (!?) In the first episode a group of delinquents are causing trouble on the school rooftop. Then a random old man appears and farts, and the fart lectures the delinquents. The delinquents then change their life around. So this was definitely not the kind of series I can appreciate. I didn’t find it funny, I really disliked the art style, and the story was just really random. 0/5

That’s it for now! I hope you enjoyed my impressions of these episodes. I’ll definitely keep watching Handa Kun,  Cheer Danshi and Fukigen na Monokean. I won’t keep up with Servamp, it was interesting but I’m limited on time, and hell no to Onara Gorou.