Yokozawa Takafumi no Baai is a BL anime film, based on the light novel of the same name by Nakamura Shungiku. The story is a spin off from her hugely popular series Sekaiichi Hatsukoi. Set in a publishing house in the manga division, Yokozawa Takafumi no Baai focuses on the love story of the ‘bear’ sales manager and a manga editor. Prepare yourself for lots of doki doki (heart beating) moments!

The Case of Yokozawa Takafumi

After being rejected by his first love, Takano Masamune, Yokozawa drowns his heart break at a bar. He wakes up butt naked, in a room with Zen Kirishima, a manga editor who he works with. Zen threatens Takano with pictures that he took the previous night and asks Takano to go out to drink and have dinner with him every night. They go from eating out, to eventually eating at Zen’s house, where Yokozawa is introduced to Zen’s 10 year old daughter. When Yokozawa’s cat gets sick, they move in together and their relationship begins to grow.Yokozawa begins realising that Zen is really trying to help him get over his heart break with Takano. Zen has been trying to distract him and also give him the strength to realise that the relationship wasn’t healthy. 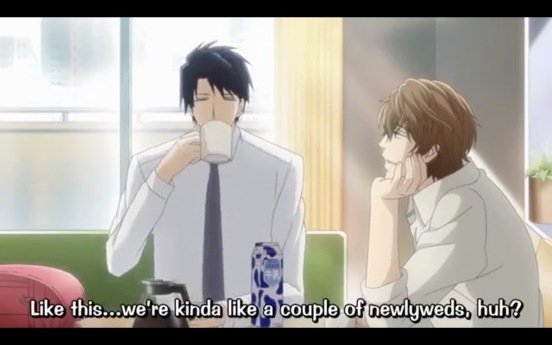 I was incredibly excited to see this film, I’ve been a long time fan of Nakamura’s work, and Yokozawa was an interesting character. I have to say I don’t think the film really did the story justice. There are random time jumps which are confusing – one moment Yokozawa has just arrived at work in the morning and the next Zen is dragging him to a bar to drink. While the focus was on Yokozawa, I would have liked to learn a bit more about Zen. Zen was a bit of a bland character, and I really did not like the fact that he had to ‘threaten’ Yokozawa with pictures to get him to go out. The focus on Yokozawa and Zen was only about a 40 minute film, which was disappointing, with more time their relationship could have been developed to be deeper.

Seeing a softer side to Yokozawa

What I really did appreciate about this ‘film’ was seeing a different side to Yokozawa. In Sekaiichi Hatsukoi, he’s very much the ‘bad’ character – putting Ritsu down and trying to get in between him and Takano. It was a good way to learn about the heart ache that Yokozawa was going through. Just seeing him interact with his cat, and Zen’s daughter showed a much softer side to him. I also really enjoyed seeing the sensitive and innocent parts of him – how he was clinging on to his first love. I’m glad he found happiness in the end.

As I mentioned before, it was incredibly short, because of this, the parts dealing with Yokozawa’s heart ache were often very quick and superficial. I would have liked the series to delve a bit deeper. Especially how he’s recovering from his heart ache but is still falling in love with Zen – the series should have focused on how his relationship with Zen was different to his with Takano. Zen himself says that Yoko-chan’s and Takano’s relationship was one of dependency, one could argue that Yoko-chan was becoming dependent on Zen to get over Takano.

After the credits, there’s a 15 minute piece going through Yokozawa/ Zen and the other couples from Sekaiichi Hatsukoi. The setting is Valentine’s Day, and how one of the halves of each couple struggles to get something for their other half. It was really adorable, especially Yokozawa/ Zen and Hatori/ Chiaki. In just a 5 minute segment you can really get the dynamics of the couples and also the personalities of each character. The only annoying part was that every couple besides Hatori/ Chiaki had one person who was too embarrassed to buy chocolate for their other – I would have liked a little bit more variation. Rather then every person being “I CAN’T BUY IT TOO EMBARRASSING!”

Overall I give the film itself a 7/10  It was really sweet and I always love the stories Nakamura comes up with, but I felt it had a lot more potential. Yokozawa deserved a really detailed love story and he wasn’t quite given that.