Following on from my first two reviews of Orange, episode 1 here and 2-4 here, my love for Suwa has only grown stronger. Also a lot has happened with Naho and Kakeru, and since they’re the main characters, I guess I’ll talk about them. So quick recap: Naho has received a letter from her future self with a list of instructions on how to ‘save’ the new transfer student Kakeru. Naho and Kakeru are beginning to fall in love, and Naho struggles to follow the letter’s instructions – due to nervousness (?), embarrassment (?) I don’t know what – she just takes an entire episode to follow simple instructions. Anywho onto the last 7 episodes! 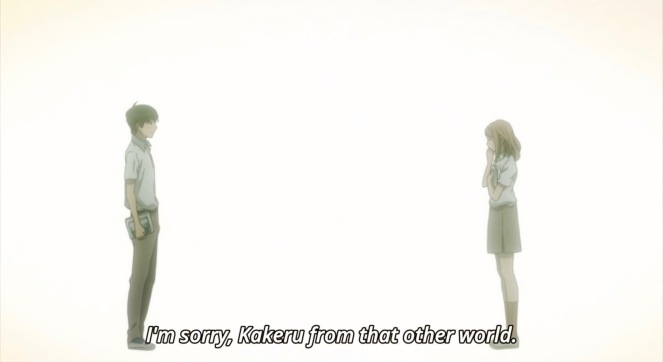 So hey, you know what would have been awesome for Naho to know a few episodes ago? THAT EVERYONE HAS A LETTER. Yep that’s right, even Hagita, and what have they done with said letters? Pretty much nothing, besides Suwa, Suwa is king. 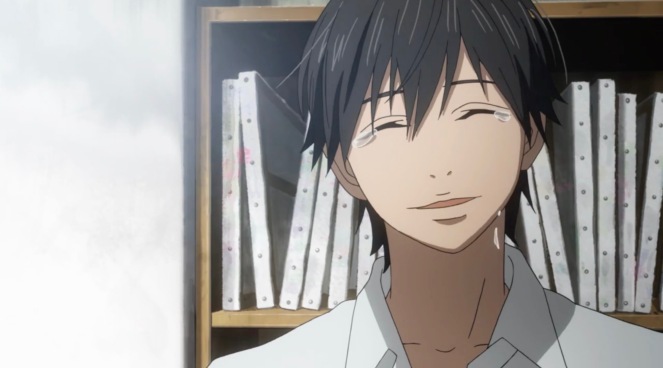 We first learn that Suwa has a letter, when Naho goes to him, confused about Kakeru’s behaviour. They both confront Kakeru about how he’s feeling, and it’s the first time we really see what’s going on inside Kakeru’s head. All the pain and sadness, as well as the fear. It’s an incredibly heart warming scene, which is only added to when Naho (finally!) confesses her love to Kakeru. 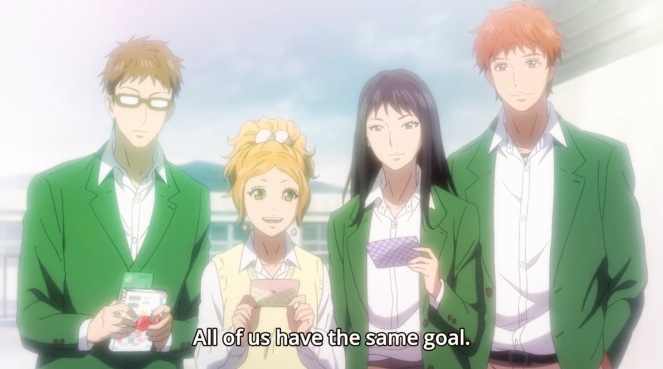 In the next episodes, Naho is confused by the way Kakeru always holds his hand out to her. Suwa suggests asking the others, and during the ‘group meeting’ Naho tells them about the letter. To which they all reveal their own! So once it’s revealed that everyone has a letter, they finally team up to help Kakeru. Comparing notes, and keeping check on Kakeru, they seem to have everything worked out. All this culminates into one heartwarming Sport’s Festival episode, where they run in a relay race and come first.

In the last 7 episodes, Naho and Kakeru’s relationship significantly grows. But you know what doesn’t grow? Naho’s character development. Right up until episode 11, we finally think that Naho has grown. She’s stood up to the Senpai who was bullying her (the one that used to date Kakeru), she’s been honest about her feelings, and heck she’s really trying her best. We begin to see a new side of Naho – she’s gaining confidence in herself and the people around her. That’s not to say there aren’t time where I’m not completely confused by her actions. For example when she and Kakeru confess their love, but don’t want to date. Not because she doesn’t want to put a label on their relationship, but she doesn’t have the strength to say – I want us to officially date. 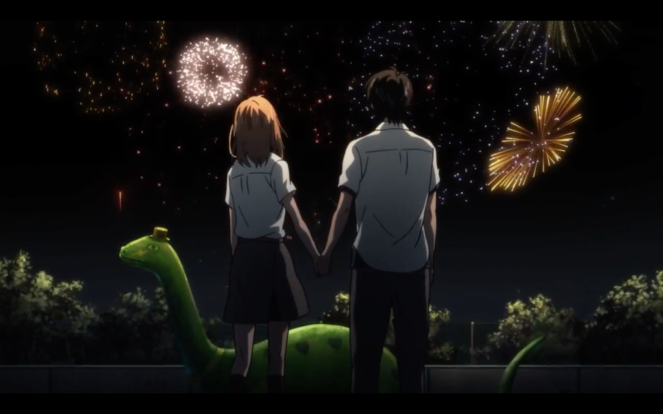 Her until character development was completely thrown out the window in episode 11. Episode 11 was by far one of the most tense episodes of the series. Audiences know that Kakeru is on the brink, and we also know that Naho doesn’t have the social skills nor tact to actually help him. For just a brief moment, it looks like everything is going to be okay. But when Kakeru says he wants to go back home to see his sick grandmother, Naho goes “can’t you stay a bit longer?” Granted, she was concerned about what he would do if he was left alone, but it’s just the perfect example of her complete inability to communicate her empathy. The entire sequence leading up to that, when Kakeru talked about his fears over his grandmother’s health, Naho was pretty much silent. There was so much internal dialogue, but Naho never spoke any of it.

A lot of online forums have given Kakeru a lot of crap for reacting so harshly to Naho. But neither of them were in the wrong. Naho tried her best to comfort Kakeru, as I said before her own personal limitations prevented her from doing this properly. Kakeru himself is dealing with significant issues – it’s not up to him to act all happy dandy, especially when someone APPEARS to be being unresponsive and uncaring. 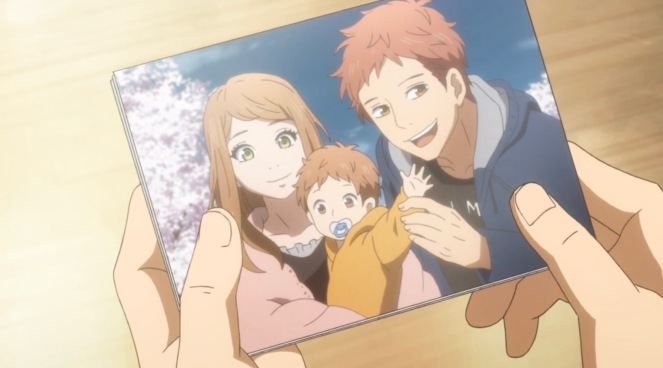 I don’t think I’ve ever watched a series with such a good character. There should be a new anime meme called ‘Good Guy Suwa’. Suwa is the driving force behind Orange, he’s the one that has pushed Naho to be honest with her feelings to Kakeru, and the entire group’s support. Suwa does all this, while putting aside his own feelings for Naho. He’s the ultimate selfless character. 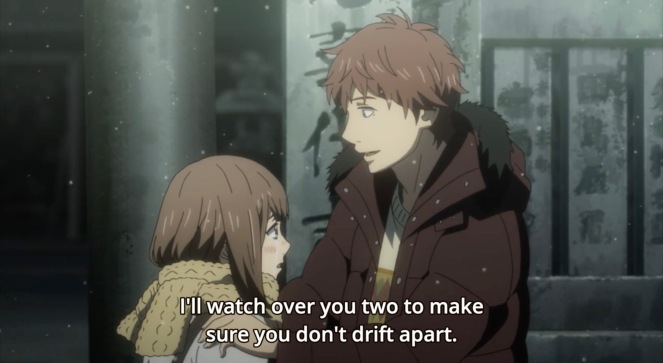 When it’s revealed that he received a letter from his future self, we learn that the letter even includes details of his marriage to Naho. There’s photographs as well as a note saying that after Kakeru and Naho have a big fight, Suwa confesses to Naho – that was the start of their relationship. The rest of the group try to convince Suwa to join them at the festival, but Suwa refuses. He refuses until the last moment, appearing before Naho – not to confess to her – but to comfort her. He seemingly throws away his one chance to be with Naho – for Kakeru’s and Naho’s benefit.

Animation Seems To Be Getting Worse (!?)

This one isn’t a big complaint, since it hasn’t bothered me. But as I watched all 7 episodes in a row, I noticed the animation style and design just kept getting worse and worse. The first few episodes there was incredibly attention to detail, even in the background. But Ive found the details significantly lacking – in medium close ups they can’t even be bothered to give eyes proper detail.

Final Thought on Episodes 5-11 of ‘Orange’ 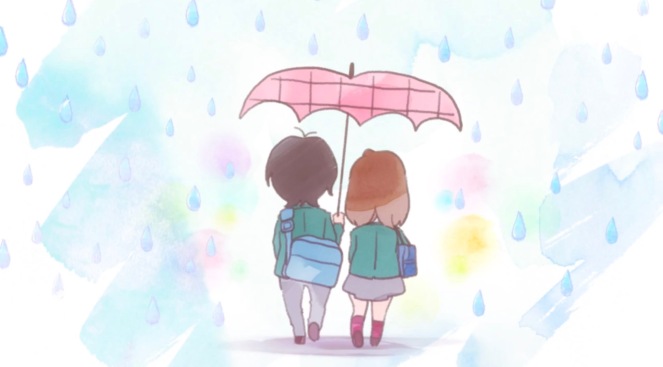 I feel that this series would have done a lot better without the love story between Naho and Kakeru. The best moments of the series so far have come from the group bonding with Kakeru and working together to save him. Heck, even if the series was just about Kakeru and Suwa’s friendship () it would have been far more enjoyable than a pretty pathetic love story in the context of incredibly serious issues. The declining animation style just feels lazy, and ruins a once visually appealing show. Overall I’m giving the series a solid 7/10.