We’ve finally reached the end of the emotional rollercoaster that is ‘Orange’. Click on the links if you want to have a recap on episodes 1, 2-4 and 5-11. But essentially, the last time we left Naho and the gang was after News Years Eve. Naho had accidentally upset Kakeru and he ran off. We know that Kakeru commits suicide soon after Valentines Day, giving the gang less than 2 months to save him.

Episode 12 is by far one of the most insightful episodes of the season. We get a look into parallel world Kakeru’s life, all the events that culminated to ultimately push him over the edge. We see his old friends make light of his feelings and how his feelings are repressed and bottle up. We also get to learn more about how the 10 year later gang works out to send the letters to the past. Via the Bermuda Triangle, if you could believe it! Episodes 13 is nearly 40 minutes long and is so intense! We see Naho trying her hardest to conner back to Kakeru. She doesn’t want to loose Kakeru and tries everything she can. She manages to get through, putting aside her anxieties and tells Kakeru the truth about her feelings. Audiences think we’re in the clear, everything will be alright, until Kakeru finds his mum’s phone and this message.

The message brings back all of Kakeru’s feelings of guilt and depression. He learns the true extent of his mother’s love for him, and he can’t forgive himself for not being there for her. Thankfully the gang is on standby for anything that might happen. They wait and after an incredibly tense 10 minutes of running around they find Kakeru. They’re almost too late, he steps in front of an oncoming truck, but he steps back at the last second. What makes the difference is all the effort that the group has put in. Parallel universe Kakeru thought that the gang wouldn’t be upset if he left, but he knows that this gang would be heartbroken. He can’t bear to leave them to feel the same guilt that he does. The gang show him their future letters, as well as letter from there parallel future selves to him. Naho knows that it won’t be an easy road for Kakeru, but promises to continue to save him. 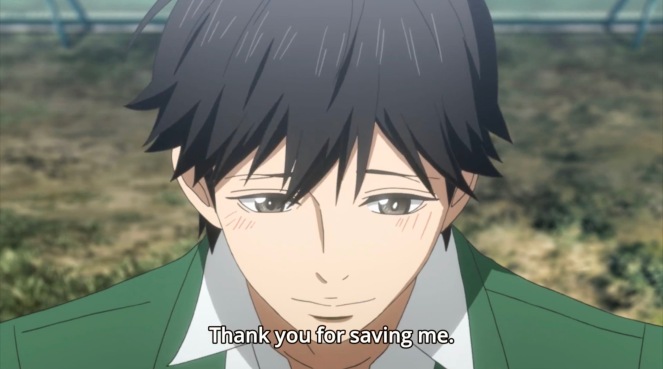 In Defence of Kakeru and Naho

On a few forums and in the comment section of where I watch these episodes, I’ve seen a few viewers really hate on Kakeru. Comments range from his behaviour to Naho in episode 11 to just complaining about how ‘pathetic’ he is. To this people, I ask that you take a moment to think about everything that was going on in Kakeru’s life. In episode 12, we find out that Kakeru’s father was abusive to him, his mother ultimately divorced his father but Kakeru probably always felt guilty. We also learn that in his previous school he was bullied by his upperclassmen, and his friends did nothing, in fact they may have even joined in. His mother moves him to a new place, and soon after kills herself. Kakeru’s last message to her is for her to stop bothering him and act more like an adult. He represses all these feelings, not wanting to impose on his new friends. When he finally does come out to his old friends, they think it’s a joke and brush it off. Finally he sees the text message from his mother. Everything just culminated, all these events just forced this young teenage boy further and further into depression. It’s not a simple matter of him ‘getting over it’.

I have to admit, in previous reviews I wasn’t too impressed by Naho. But after thinking on her character more, I realised that just as much as Kakeru was being saved, Naho was too, in her own way. I think a lot of people put the emphasis on Kakeru being the one suffering from a mental illness, but from Naho’s behaviour it seems like she too may have one. I would argue that she may have a form of social anxiety, and really low self confidence. In the first episode we see that she can’t say which type of bread that she wants to eat, because she doesn’t want to impose on her friends. When trying to give Kakeru his lunch, she’s continuously worried about what he will think. On top of all this, she knows every thing she does could hurt Kakeru and lead to his death. It’s tremendous pressure for a teenager. Through working on saving Kakeru, she ultimately grows as a stronger person. She believes in herself and doesn’t let anyone get in her way. 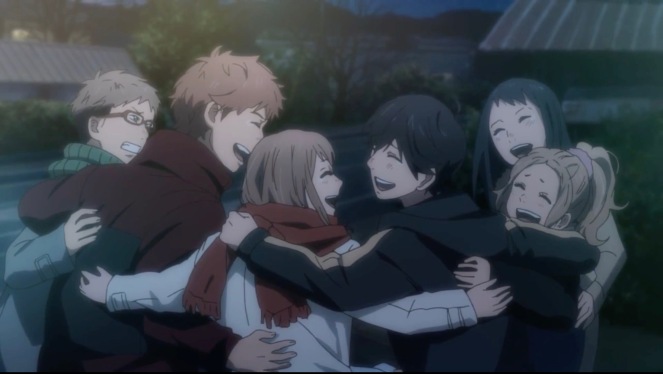 Overall ‘Orange’ was a great series. Like most anime it did let itself down in the middle, with not enough character development and some lazy animation. But the last few episodes really stepped it back up. I’m really looking forward to Orange: Mirai and seeing how Naho and Kakeru’s relationship goes. I would have liked the series to have had more episodes like episode 12, looking further at Kakeru’s internal monologue rather than just the gang. But ultimately definitely a stand out anime that tackles mental illness in a very mature way, and in doing so reduces the stigma around it.