This post should be called ‘how a bloody cat almost broke my heart’. I was not expecting this cute kid, the last in my ‘My Strange Lovers’ series to be so intense. So, like I mentioned in my previous posts, you start the game moving into a shared house. The 4 guys that live  aren’t like your regular Joe, they have beast blood in them. The 4 are hunted by creatures called ‘Spectres’ who kill beasts to help take on a human form.

Click the links below to check out the other routes

20 year old Mao is a university student with a kind & calm personality, he’s your typical sweet boy character. Looking at the reviews on the app store, his route seemed to be a fan favourite, so I saved his for last. Initially you and Mao start out as friends, and just like Shin and Hyouko he pushes you down and freaks you out (*angry sigh*). However, the two of you continue to be friends and hang out. 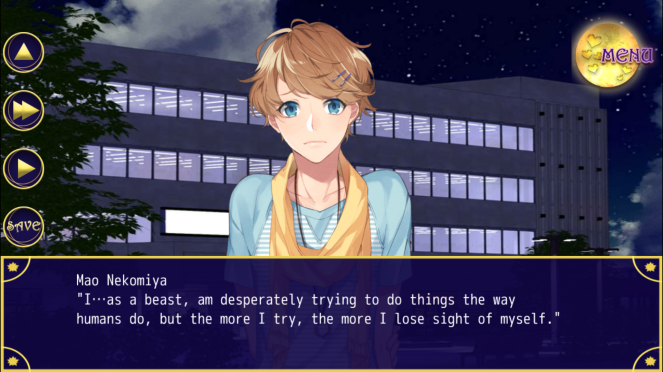 While for most of the other guys the main ‘conflict’ in the story was the Spectre, Mao’s is slightly different. Mao has a female friend called…something (Ayaka?), who is desperately in love with him. She follows you on your date with him, phones and messages him non stop and even shows up at your house! But rather than being a sensible person and knowing that Mao might be a little creeped out by this behaviour, you think “THEY MUST BE IN LOVE”! Mao and the rest of the ‘gang’ find out that you’re human and Mao throws down this wonderful heart breaking line.

When things couldn’t get worse, Ayaka corners you in an alleyway, with two scary guys. She tells the guys they “can do whatever they want with you”, they kidnap you and take you to a club. Yoruichi (the spectre) is waiting for you there – as a woman lemme tell you,  I would rather face a Spectre than two creepy guys. But Mao comes to the rescue, gets all manly, and tells Ayaka off. But then you’re character is like “Oh no Mao, don’t yell at her, she just loves you.” Which REALLY pissed me off, like this woman essentially organised two guys to attempt to do god knows what to you, and it’s okay!?

Anywho, you’re getting ready to move out, and Mao stops you. He confesses his love, saying he’s grown stronger as a person because he has you. He no longer cares about his (shitty) beast powers. You guys kiss, and live happily ever after.

Issues with Mao’s Route and My Strange Lovers Game

I’ve listed the problems with the game in general in my previous posts, so I’ll just copy them here, and add one more

As I vented above, I had a REAL issue with the story device of Ayaka. Interestingly, I’ve played a few other Otome games where a similar thing has happened. Your ‘guy’ is the love interest of another girl, who then gets two other guys to attack you. To presumably sexually assault you. And it’s disgusting. It’s truly a disgusting theme that a lot of Otome games have, and it’s incredibly uncomfortable for players. But of course the guy will come and save you at the last minute, but for those few scenes, it’s quite a terrifying experience. I genuinely hope that this ‘theme’ will stop appearing in games.

That’s it for ‘My Strange Lovers’! I hope you guys enjoyed reading all the routes. After playing through them, I wouldn’t really recommend this game unless you were really keen. There’s other games like Mystic Messenger or Liar! that are more dynamic and interesting.

If you are interested, the game is free to download at both the apple store and play store. There’s also a Spanish version available!