Yay, it’s time for the cutie pie blondie! Quick recap of the prologue – you’ve found out your engaged to the nobleman, Aoi. You’re not too happy about it, but since your stepfather organised it, you can’t say no. To check out the full prologue click here! Also I went back and updated the previous posts, apparently you can’t get the stepfather route! The developers had accidentally used his image instead of Rokujo’s on the route choosing page.

For some reason the CG is no longer loading for Reverse Genji Romance. I contacted Genius Inc. through email, twitter and instagram and they never responded to me. If you would like a copy of the CG you can email me at kurosamareviews@gmail.com. Can you also email Genius (support@gen-ius.com) about this issue? Maybe if they get enough emails about it they will finally fix it up!

Below are the options you need to choose to get  a ‘super good end’ – meaning you get an image! Otherwise you’ll just receive a good end – no image.

So this is going to be quite a quick rundown compared to my other posts. Simply because whatever happens, wasn’t that exciting. After the prologue, you need to leave the castle because someone (probably Chujo, that bitch) has been spreading rumours about you. Your stepfather suggests going to the country side until the talk dies down. On your way there it starts raining like crazy and a mysterious figure, who looks like Akashi, offers you an umbrella. Later that night, the rain continued and suddenly lightening strikes a tree near your house! The entire place is up in flames, and it looks like its the end, but Akashi comes to the rescue! 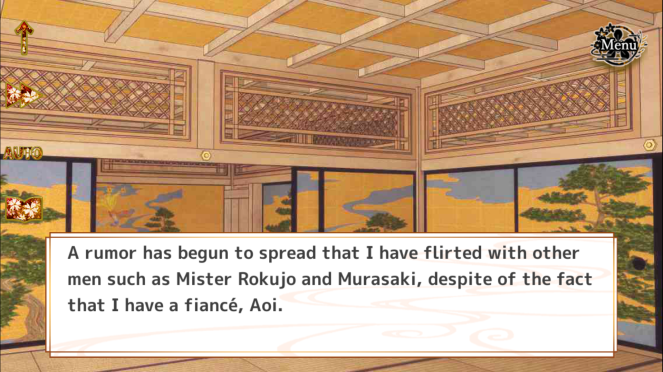 Akashi and his father agree to allow you to stay at their home. You start to become more drawn to Akashi, and his biwa playing. To pass the time he agrees to be your teacher, and your skills dramatically improve. Akashi’s father confesses to you that he would like to see you and Akashi married. Since Akashi is quite a weak boy, his father wants him to marry a upper class woman who can look after him. One day Murasaki and Chujo show up to check on you. You, Chujo, Murasaki and Akashi are chatting to Akashi’s father when Chujo brings up the topic of your engagement to Aoi. Akashi’s father is incredibly angry, believing you tricked him and essentially turns you out of their house. 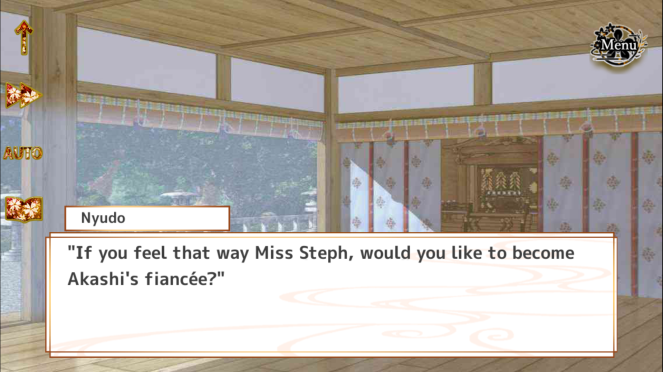 You return to the castle, and try to focus on your engagement with Aoi. You visit him and play the biwa for him. He’s clearly impressed and tries to play with you, but you realise his music isn’t the same as Akashi’s. It’s not nearly as gentle or sweet. Later you hear that Akashi is quite sick, and you go to visit him. When you arrive you find out that Chujo has negotiated with Akashi’s father for HER to be his fiancé. You’re heartbroken but you still try to nurse him to health. 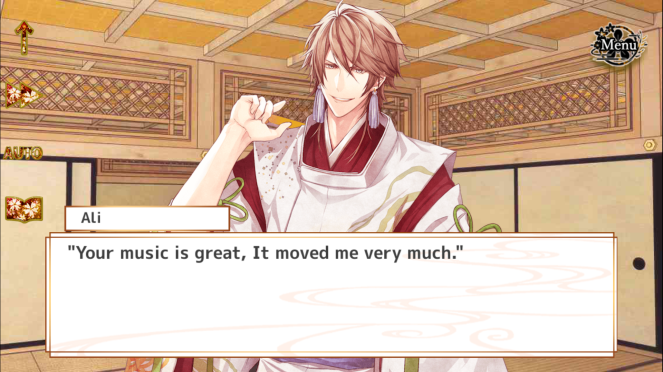 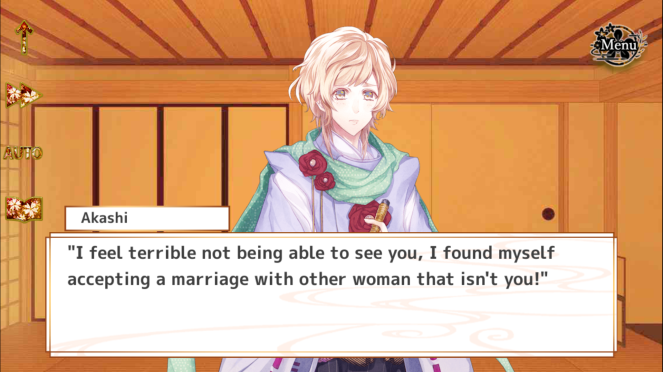 After a few more confrontations with Chujo,and wrestling with your feelings. Even a sly confession from Murasaki and Rokujo, you and Chujo finally face off. You battle over Akashi in a card game, and you win! Akashi doesn’t seem too upset about being the prize. You go back and talk to his father who accepts your marriage. In the end, as always, you get a nice picture and some sweet time with the beautiful Akashi!

Issues with the route

I hope you guys enjoyed this write up! I’m aiming at writing up Aoi’s route by Sunday night. If you have any requests let me know, also I’ve added a poll on the right hand side – please vote. It’ll let me know what kind of posts you guys want to see more of 🙂