‘Animal Lover’ is a choose your own adventure, romance VN game by Trainwreck studios. Despite the name, there aren’t any furries to be found here! You are introduced as a budding Veterinarian doing an  internship at a local Vet clinic. A young girl brings in her sweet hamster Hamchop, and just like any decent human being, you decide to give the little fella a kiss. Hamchop is more than grateful for your kiss, because he suddenly transforms into the dashing (and butt naked) Prince Edmund. Life goes haywire from then on, as you try to find more of these gorgeous men trapped in animal bodies, and save them from a witch’s curse. But how will these 5 hunks, from 5 very different time periods get along? And, more importantly,  which one will you fall in love with?

I’d like to thank Trainwreck studios for providing me with a review copy of this game! 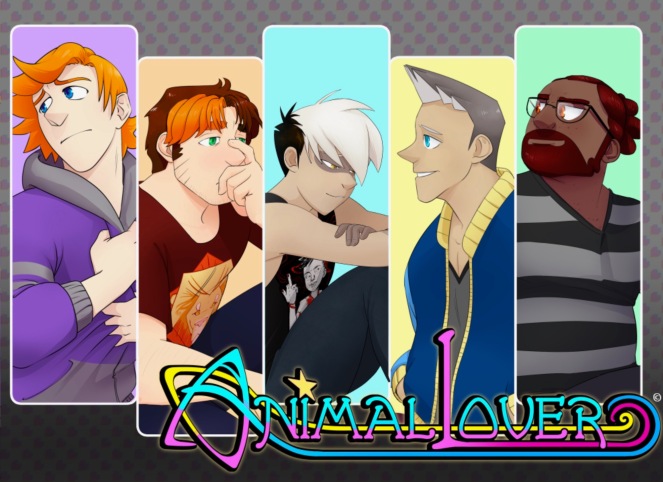 I actually really adored this game. But I will say to players it takes a while to warm up to the characters, particularly your character. Your character is very similar to Tohru (Fruits Basket) the sweet girl who always wants to do right by others, she can barely even tell a white lie. At first I was a little bit shocked by this very pure character, but as the game went on, she really grew on me, and wasn’t nearly as one dimensional as I thought she was. I also really love the diversity of the guys, from different ethnic backgrounds, different body types, they were such a perfect combo, and their personalities really stuck out. There was no guy who just fell into a typical romance trope, they were really their own person. The characters also really balanced each other out, you had Kyle’s craziness with Miguel’s sweet quietness, and then Charlie’s moodiness with Frankie who is super laid-back.

The CGs were really well drawn, but I wish there was a way to save them. Some of the screenshots I took while playing turned out blank, and there was no ‘gallery’ to go back and look at CGs. The story itself was really well done, and I really appreciated how it touched on topics such as Feminism and the line between Feminism and Misandry (which many MANY people do not see the difference). It was a difficult topic to discuss, especially through a visual novel, but through the ideas of forgiveness and change Trainwreck created a really mature and interesting game.

I really enjoyed the game, especially the story, however I found at times scenes could be a bit long. Especially with VN games, there’s a fine balance between description and dialogue, and found this game was very dialogue focused, this allowed for a lot of insight into the different guys and their time periods, but when the talk turned philosophical, I could only handle a long philosophical spiel from about 3 out of the 5 guys. But besides that, most scenes are incredibly well written, really pulling on the heartstrings, it’s the only romance game I’ve played that has made me cry. One thing, that did not bother me, but may bother other people, is that there is a lot of swearing in this game. So just be mindful of that if it is something that you do not like. I will also mention that while I described this game as ‘Romance’ the romance is not the focus on the game. The game is more focused on the 5 guys and their growth, the romance is secondary.

The MC in this is probably one of my favourite MC’s I’ve seen in an Otome game. While I said above she is a bit of a goody two shoes, she’s also incredibly strong and brave. She stands up for what she believes in, even at the risk of emptying her bank account. I also appreciated that a lot of the choices you make as MC aren’t obvious at which guy will like you. It gave me, as a player, a lot more freedom to immerse myself in the game, and act how I would act in that situation.

One final point is probably just a small one but i felt really bad for the character of Frankie. I felt a lot of the characters always teased him a bit much, and I don’t know, I just thought it as a bit mean. The whole time I was always like “poor Franky”. There’s also a scene where Frankie doesn’t want you to put yourself in danger, the way the scene is framed is that it appears that Frankie is saying ‘a woman shouldn’t put herself in danger for a man’, and you (MC) and the other guys really get angry at him (seeing him as being a major sexist). But I completely didn’t interpret his actions that way, I believe, regardless of MC’s gender, Frankie wouldn’t like the idea of anyone putting themselves in danger for him. Especially him, understanding how awful it was to loose his life because of a witch’s curse, he wouldn’t want anyone to suffer that same pain.

I highly recommend this game to anyone who enjoys Otome, but is looking for a game that is a little bit more realistic with some deeper themes. The story is very interesting and well written, with diverse characters. There’s lots of teary moments, but there’s also heaps of laugh out loud ones, especially with poor Frankie trying to work out what the internet is. This game is a must play for all romance gamers! Check out the game over at Steam – Dive right in to a steamy romance with some Beast Boys!  You can also check out the Developer’s blog over here.