Period Cube ~ Shackles of Amadeus~ came out late April, and living in Australia, it took me a week and half to receive it through Amazon >_< . But I’m still super thankful towards Amazon, if I bought it through the Playstation store it would have been like $70!!  Anywho, the game has been the talk of the Otome community, so I figured I would write up my impressions after my first play through. After I finish all the routes I am planning to write up another post to see if my opinions changed at all. My first play through I was with Astrum, but while this review is focused on his route, I will try my best to avoid spoilers!

If you found this post helpful, please consider supporting me through Patreon. If you become my patreon you can be a part of ‘Two Happy Cats’ by suggesting reviews to do, and topics to discuss. Patreon packages start as low as $1 a month and you can cancel at anytime! 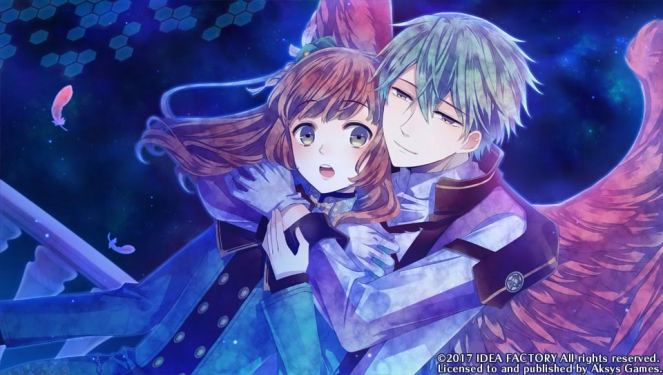 In Period Cube you play as a school girl whose older brother has gone missing. Initially you think he’s just been busy, but once your childhood friend, Hiroya, speaks to you for the first time in forever about it – you know something is wrong. The two of you discover that your brother is trapped in ‘World V’ a secret sever for an online multiplayer game. However this server traps individual’s conscious in the game. You and Hiroya accidentally enter the game. Once you enter, everyone is after you, as you are the legendary ‘Amadeus’ an ultimate weapon. What’s a girl supposed to do!?

I was really impressed by the concept of this game. It reminded me of a manga I read back in high school, also, more recently ‘Sword Art Online’. In saying that, for a game that is based on an online multiplayer game that are barely any fighting options! While the game is a visual novel, I would have really liked to see some proper fighting incorporated, where you can direct your team to victory, rather than just seeing lacklustre animations. One thing I really did enjoy about this game, is that after the first chapter, the game immediately branches off to your babe’s route. So unlike games like ‘Code Realize’ you don’t have to skip through 8 chapters of dialogue to get to the next route. Furthermore, there’s a few twists and turns to keep player’s on their feet. 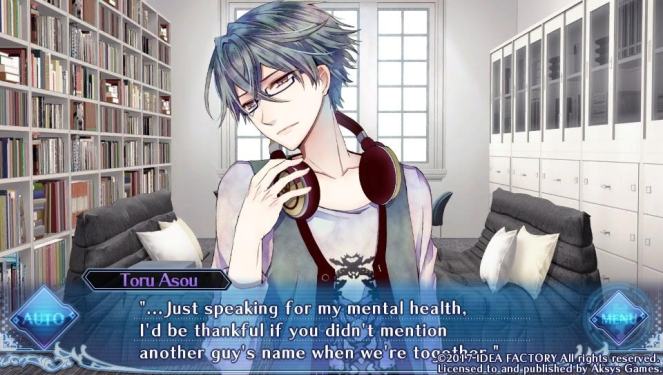 While I was very impressed by the game’s plot and story, it’s really the character that let this plot down. The MC is such a bland personality, she’s that very typical otome heroine who struggles to take charge of her own destiny and “oh I’ll just keep smiling to keep everyone happy, oh gosh smiling is so hard!” At first I really disliked Astrum, he was just such an incredible pervert *spoiler* *end spoiler* But later on in the story I really grew to enjoy his character, he turned out to just be a really sweet awkward guy – but I still couldn’t forgive him for that scene! Looking at some forums, it seems that Astrum is one of the better guys in the game, so I’m a little worried about where my other playthroughs will take me.

One thing that really stood out to me where the side characters, particularly Sirent. Astrum is cute and sweet, but his story never really moved me. Siren it Astrum’s second in charge and I spent most of Astrum’s route wishing I could get with Sirent. There were other super minor characters, and by minor character, I mean proper unnamed random characters, were more interesting that Astrum. I was literally more interested in this one red haired demon, who is never named, than I was by Astrum. And unfortunately, that’s mark of a poorly developed character. Astrum is great and all, but he’s not main romance material. 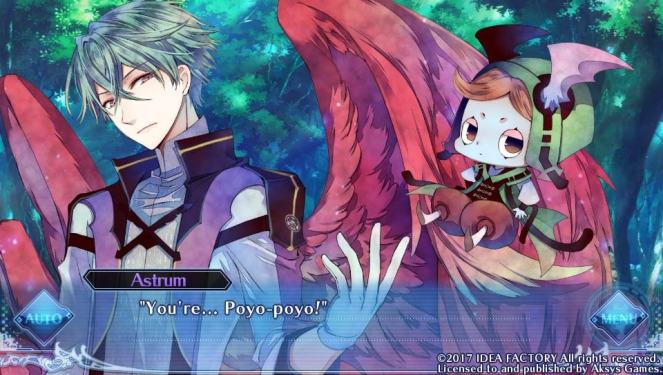 One aspect of the game that a lot of players seems to really love is the art. But I wasn’t too fussed on it. Sure, it’s very pretty and unique, but it just reminded me of Shojo manga. At times the character’s postures were drawn a little bit awkwardly. But I will say I love the colour scheme! While the music was really lovely and soft, for some reason it really reminded me of Yiruma’s music. All the music seemed like a cross between ‘River Flows in You’ and ‘Kiss the Rain’ which kind of threw me for a bit. Also because, while I think the pieces are really beautiful, they didn’t really suit the intensity of the game and came off a bit bland.

Overall my first impression of the game was alright, for now I’d give it a 3.5/5. While the story had a really interesting premise, it wasn’t nearly as exciting as I thought it would be. The MC is ridiculously bland, and so far the guys seem a bit meh. As I mentioned above, some of the side characters seemed to be better romance choices and that’s a mark of a badly executed otome game. I will continue playing the game, and hopefully after doing the rest of the routes, will appreciate the game a bit more. As I’m playing ‘Code Realize’ at the same time, my initial disappointment for ‘Period Cube’, could be from the high standard I held it to.