XOXO Droplets is a newly released otome game by indie developers ‘GB Patch Games’. GB Patch Games has also done other fantastic games like ‘A Foretold Affair‘ , and has more planned for the future. XOXO Droplets follows you as you begin life in a boarding school, the same school you’ve begged your parents to go to since you were 5! The only catch is that you can’t make everyone hate you…like they did at your last school. How will you fare with making sure everyone likes you, or at least doesn’t mind you!? To make matters even worst your placed the social pariah’s club, but hey at least the guys in it are all cuties.

The best part of XOXO Droplets is the characters. When you first start the game you’re character is set up as a quick-witted girl who isn’t afraid to run her mouth. So why not get a boyfriend to match? The six other members of the social pariah’s club (not the offical name), are all drop dead gorgeous, with drop dead personalities to match. To give a brief example  Nate (pictured above) is a perfectionist who holds himself and everyone to an impossible standard. Another boy, called Bae is ridiculously condescending and another, Shiloh is a suck-up. As part of the club, the supervisor forces you to all interact, it’s through these meetings you get to know the characters.

I really appreciated how these characters didn’t take a cushy typical otome route. The guy’s bad personality didn’t magically disappear overnight and he became a Disney prince. No, these guys are rotten apples through and through, and I absolutely loved it. I loved hearing what ridiculous non-sense the guy would say next, and better yet I loved MC’s response to it! MC is never afraid to hit back, and the banter between her and her fellow classmates was so enjoyable to read. I spent most of the game laughing! 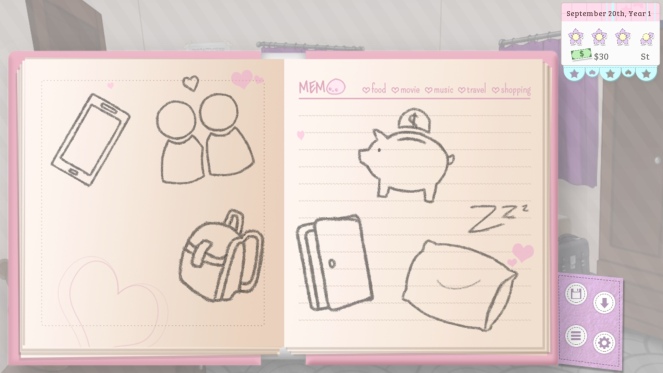 Generally, I found the gameplay to be really fun and unique. The game works day by day, but the important choices are mainly done on the weekends and Monday. On the weekends you can choose to text someone, go on a date, work, go shopping or rest (options pictures above). On Monday you get to choose who to sit with at lunch (pictured below), who you sit with and where you sit changes how different social groups view you. I did find the social groups part a little bit difficult to manage, in my play through I managed to make the ‘others’ group and the nerds hate me, but I was super popular with the populars, artists and troublemakers! Before you play the game I highly recommend watching the tutorial. I kind of jumped in and was initially a bit confused with the game mechanics. However once I did check out the tutorial everything made sense.

I really enjoyed exploring the different social groups and I thought it was a really cool edition. If having a jerky boyfriend is not your cup of tea, you can also date one of the guys in the social groups! Unfortunately I was too in love with Nate to even look their way 😛  I also found the part-time job a lot of fun. In the game I really felt like I was back in high school, trying to balance all my commitments! 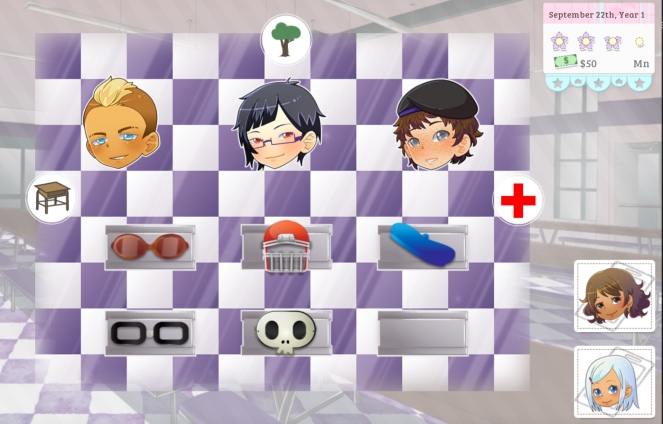 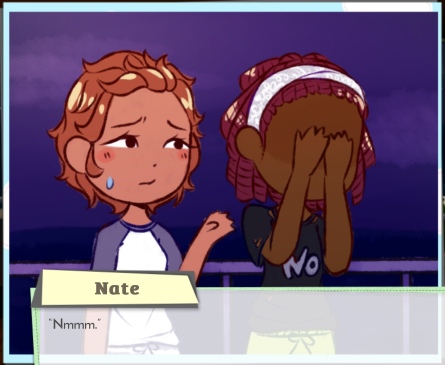 One of my favourite aspects of the game was the character designs. Each character’s personality was clearly represented from the top of their head to the tips of their toes. As I always say with games, I loved seeing the diversity in body types, and XOXO Droplets 100% delivered. I was also really excited to see that character’s have different clothing according to the season, and event. The CGs feature cute chibi versions of characters, which were beyond adorable! Besides the characters, you can also see a lot of work has gone into the design of various places around town and even different types of classrooms!

I really had a lot of fun with this game. The characters were definitely the heart and soul of this game, and for that reason it’s not a game for everyone. A lot of this game is based on rude bater and insults, and I gotta say while I love these jerks, I wouldn’t want to introduce them to my girl friends. The designs of the guys, and game interface were all fantastic and really added to the atmosphere. This game is sure to put a smile on your face :).

You can get XOXO Droplets over at Steam and Itchi.o  The Itichio link also has more information on the differences between the paid and free version of the game!

GB Patch Games is currently running a competition to giveaway a free copy of the game which you can check out over here!

One thought on “XOXO Droplets Review – Winning a Jerk’s Heart”