‘Amplitude’ is a newly released visual novel + dating sim by Ceylon Entertainment. The game appears to be a sequel to another game called ‘Freak-quency’. However the other mentions of that game I could find were on some forums.  Despite not knowing much about the company behind Amplitude, I was quite excited to try it out. The game allows players to choose their gender, has 5 different endings with 12 romance-able options and over 150 CGs!

The year is 2121 and ‘mutants’, humans with special abilities, are the norm. Not only have humans changed, but technology has advanced to control and order society. This is the world in which we are introduced to either ‘Adam’ or ‘Eve’ (depending on your choice). Your character is quickly killed on screen by a mysterious figure. After dying you awaken in the afterlife where a mysterious woman offers you a deal. You can go back to the land of the living, and seek out your killer, but you have to look after a pendant for her. You quickly agree and awaken in the body of either a young boy or girl. I chose the girl, named Katy, who had just tried to commit suicide.  Katy is a non-mutant, and you now share her body, you must work together to find out who killed you and maybe even make Katy’s life a little better. 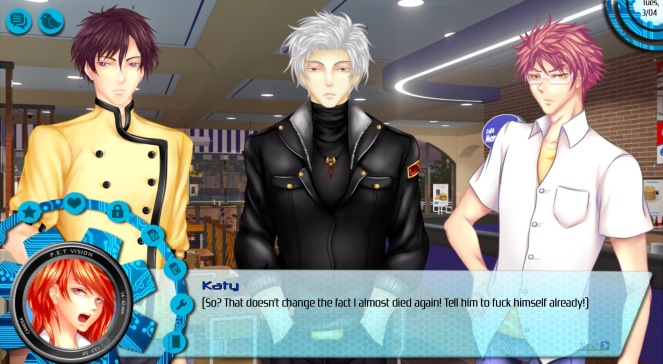 There’s quite a colourful array of characters within Amplitude, from classmates to strangers on the street. I will say that a lot of the characters are quite ‘harsh’, some of them are definitely people I would not be keen on getting to know in real life. But that’s part of the fun of playing the game, interacting with these strange characters and getting to know them. I really enjoy the banter between Katy and Eve, the game manages to really capture Katy as an angry teenager and Eve as a rebel without a cause – without the two becoming cliche. On top of this, the game very careful balances the realism of high school life through Katy’s classmates, again without going over the top. Katy’s classmates, even in the future, remind us of people we knew/know in school. 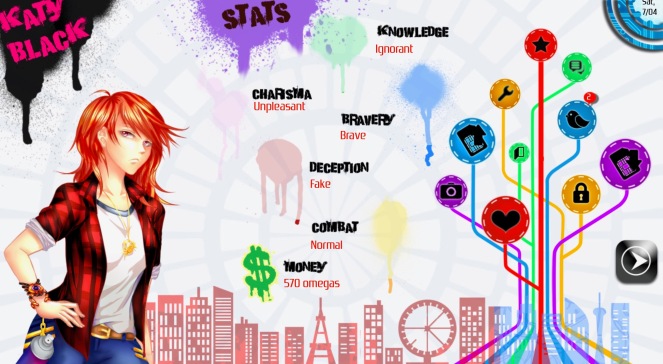 Amplitude isn’t like a regular visual novel, as Katy you are able to explore the world around her and learn new skills. During free time from school you can click around the city, going to clubs, stores and wandering through the park. You can interact with the residents around you and even pick up side quests. Skills are obtained by either studying or participating in activities. There’s even a pretty awesome messaging system where you can message friends and family. All of your choices – what skills you build, quests you complete and messages you send inform the final ending that you will get. You can even unlock some pretty adorable CGs along the way! 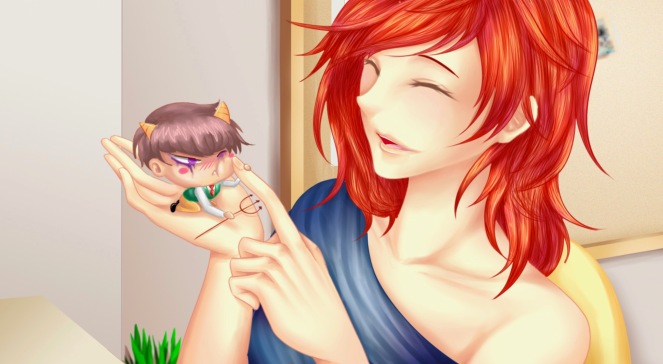 Overall while I am enjoying Amplitude I will say it is not a game for everyone. The game does touch on some very heavy topics like suicide and assault, there is quite a lot of swearing and some characters are quite rough. But if those are things that will not bother you, Amplitude is a very well designed game. There is some great voice acting, the CGs are adorable and I can’t wait to explore and meet all the characters. I’m looking forward to where my Amplitude journey will take me.

You can purchase Amplitude on Steam or Itch.io