Osomatsu San is a popular 2015/2016 anime that follows sextuplets on their crazy adventures. The series is a remake of a 1960s series, and was re-done to celebrate the creator’s 80th birthday. Since airing, the series has really taken off in popularity with heaps of merchandise and games, heck there’s even going to be an Osomatsu San otome game! However most of the Osomatsu San mobile games have not been localised, until now! Osomatsu San Hesokuri Wars ~ Battle of the NEETS ~ is the first Osomatsu San game to be translated. The game is a strategy game, you essentially send the sextuplets into battle to steal people’s cash.

The game is pretty straight forward. You choose your team to attack, and send them out when you reach enough ‘AP’. Characters have different skill sets for example one character can only attack characters in the sky and another can attack any character. To get more characters you can use a ‘gacha’ paying with either Diamonds for high quality characters, or using coins for lower quality. As you advance through levels you travel around Japan. The game does take up quite a lot of your memory, so make sure you have enough storage before you install it. 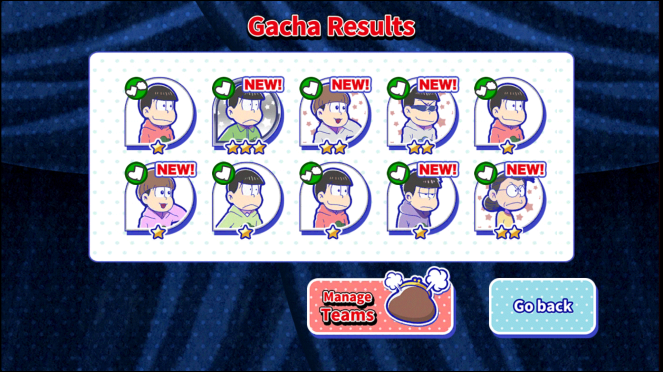 I did enjoy the game, it makes for some amusing light entertainment. However by about level 15 I was getting a bit bored of the game mechanics. You essentially send your characters out and watch them fight, and don’t really do much else. I can’t imagine myself playing this game for an extended period of time. However, the game did get me a bit more intrigued by the Osomatsu San series, and I am considering checking out the anime. If you are a big fan of the series you will probably love this game, but for others who aren’t, I reckon you can give this game a miss.