‘Lost Smile and Strange Circus’ is the latest game by Seec Inc that has been translated. Seec’s other 2 games are otome games – My Quiet Boyfriend and Search for Haru. Lost Smile & Strange Circus seems to be a game based off either a novel or a manga series(?). The game follows a young girl called Noah who has been surrounded by misery all her life. She eventually runs away from her orphanage, but just when she thinks she’s free some strange men try to attack her. Thankfully a mysterious man comes to her rescue and takes her into the ‘darkness’ where he is the master of a circus of other wayward souls.

The game works very similar to previous Seec Inc. games – you ‘tap’ to attract audience members who then allow you to ‘unlock’ new circus members. Meeting new members allows you to progress further into the story and learn more about the secrets of Oddman. Unlike other Seec Inc games, even if you don’t tap the game will automatically attract audience members as long as you have it running in the background. 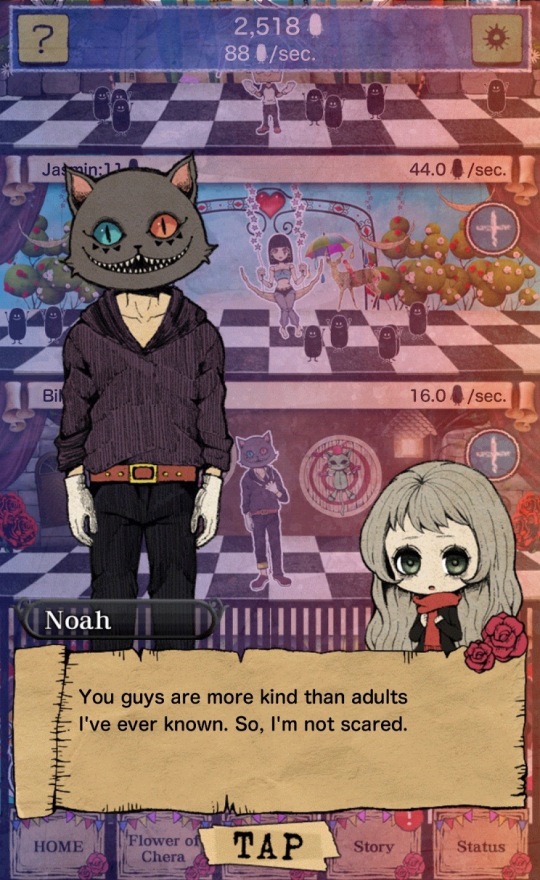 To complete the story you need to collect pictures from all the members. Members randomly show up throughout the day. But if you manage to catch one, you can have a ‘streak’ of them if you keep interacting with one after the other. If you do get into a streak, they show up every 2-5 minutes. Another aspect of the game is the ‘Flowers of Chera’, where you feed audience members to a bunch of flowers. Once you’ve fully grown the flowers something special will happen at the end of the game.

This is definitely a really fun game to play around Halloween. The art is quiet pretty, and overall has an interesting Tim Burton vibe. There are some issues that I have noted. Firstly, the translations can be quite off, especially at the beginning it was hard to work out exactly what the storyline was. Secondly, the game doesn’t take that long to play and it seems there’s only one ending. It would have been more interesting to have different endings. Finally, it does get frustrating waiting for characters to show up so you can get the picture off them, I’ve been waiting on the last guy for over a day! Overall, definitely an interesting game from Seec Inc. 7/10

If you found this review helpful, consider buying me a coffee!