Happy Halloween everyone! Sorry it took so long to post this review, I wanted to post it at Spooky Day 😛

Quick recap from episode 1! Nobuaki has just started to get settled in his new class, but disaster strikes. He and another girl in the class get a strange text message from a ‘king’ demanding that they kiss. Everyone in the class thinks it’s a stupid joke, but Nobuaki knows different. The King’s orders are absolute – betray them and face death.

So doing the recap was easy, but I have no idea where to start on the last 3 episodes! So we’re back where we left off, the new class is beating the shit out of Nobuaki. The red hair chick who has the hots for him suddenly does a Dr Jekyll/Mr Hyde and starts stripping and demanding Nobuaki’s death. Thankfully another randoms student saves him and another girl. Nobuaki remembers there’s a village…somewhere….where the game originally began, so they decide to head there. Dispersed between these scenes are flashbacks to Nobuaki’s old school and his first Ousama Game.

These episodes were not just bad, they were cringe-bad. Pretty much every order had something sexual in nature. It was like the writers sat around and went – lets make these orders are creepy as possible! What was even worse was when Nobuaki’s best friend is ordered to have sex by the end of the day -who does Nobuaki sign up for the task? His GIRLFRIEND! Like damn, the poor girl doesn’t get a say in it, the friend doesn’t get a say it. It was just so uncomfortable to watch. 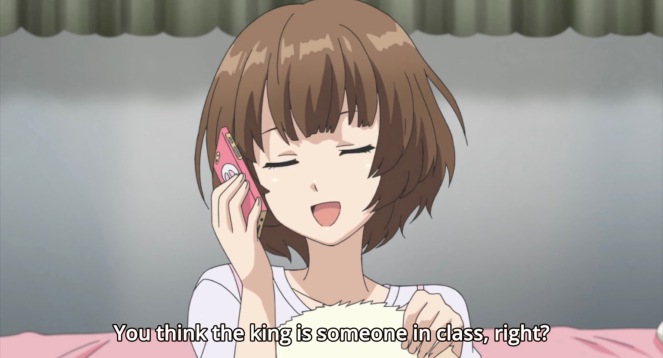 But hey, that wasn’t even the worst bit about it! The ‘new’ class has about 30 people in it, and the ‘old’ class has another 30 – so that’s 60 people whose bloody names I have to remember. But do any of these characters have distinguishable features? Nope. There’s pretty much Pretty Girl 1, Pretty Girl 2,  Athletic Boy A, Athletic Boy B etc. The show just descends into a ridiculous blood bath of characters who I honestly don’t care about. Juuni Taisen is enjoyable because you actually care / are interested when a character dies. Here it’s like ‘oh who was that guy again?’

The episodes don’t make sense, the characters are bland and I honestly don’t care who the ‘King’ is. By combining the first and second manga the series has made an awful mistake. They knew they didn’t have great source material with one series, so they figured 1 shit + 1 shit = good shit, but honestly, it doesn’t. 5/10