Just in time for the silly season, Anomalis has released a demo of their upcoming Christmas-themed game. The game ‘An Otaku’s Guide to Santa’s Reindeer’, takes us to the north pole to date some very human reindeers! You play as a young woman who has just moved to the arctic with her mums (who are both scientists). As you do in the Arctic, our MC decides to go for an evening stroll and becomes entranced by a snowflake. She continues to follow the snowflake until she falls and hits her head. She wakes up a few days later in a place as unfamiliar as it is unique. She’s arrived at the north pole, and is greeted by none other than Santa’s reindeers! 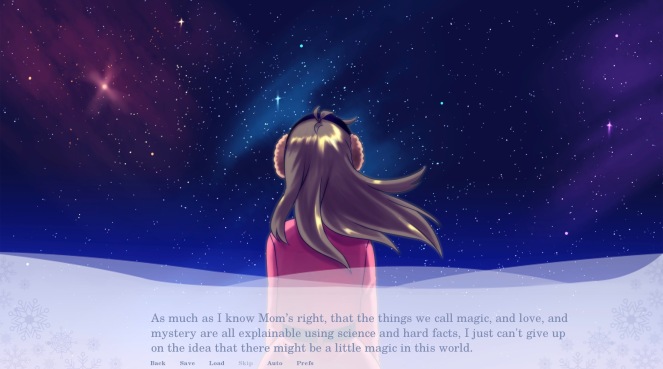 As I mentioned above, only the demo has been released, so I can only really comment on about 45 minutes of gameplay.  But those 45 minutes were pretty fantastic! There’s something whimsical about this game, that brings to mind watching old Christmas films dreaming of a winter wonderland. Especially living in Australia where our Christmas is more like a flaming hell, the idea of seeing snow fall from the sky and a comfortable chill in the air is quite magical. An Otaku’s Guide to Santa’s Reindeer combines all these nostalgic and wistful thoughts into a game with a fun jokes and a pinch of craziness.

First up we’ve got an wonderful line up of datable characters – the 9 reindeer. As a child I always struggled to remember the names of Santa’s reindeer, but in this game, each is so unique and colourful – it’s impossible to forget them! It’s really quite adorable to see all the quirks of each character, all of which are so different to one another. We also get an insight into their mismatched family through dialogue and the little chibi loading screens (which are adorable!). Playing the game you really do feel like you’ve just joined the reindeer family.

The character designs are all super adorable, from the suave looks of Comet to the dorkiness Rudolph. There’s also absolutely gorgeous background images which help you immerse into the game. I mean look at the bedroom in the image above – it’s something you’d see on a home designer tv show! On the demo there’s a whopping 11 CGs to be unlocked, so you can go back time and time again to grab them all (while you wait for the  full game’s release :P)

One of my absolutely favourite parts of the game was the music! It’s something I usually don’t notice in otome games, but as this one has no voiced dialogue it was particularly pronounced. It really tied the whole game together with its soft and delicate tones. The music is done by Alcaknight – go check out their work, amazing! 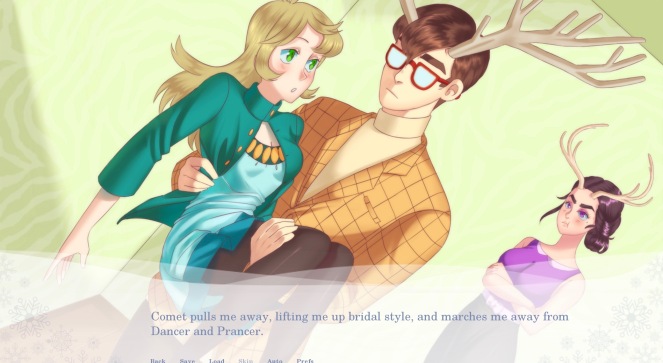 I found this game really quite delightful! The characters, music, and scenery all came together to create such a fun and lovely game. I can’t wait to see what happens on the full version (which won’t be available for another year *cries*). If you want to try the demo out for yourself – click here! On Wednesday I will be interviewing some members from the Anomalis development team – make sure to check back for that!

If you’d like to buy me a coffee, it’d be much appreciated it, a lot of time and energy is spent on writing posts and walkthroughs. By donating to Two Happy Cats, you’ll help the process!