Valentine’s Day is either just another day or the worst day of the year. At least, that’s the generally consensus amongst my single female group of friends. Some couldn’t careless but a few have confided in me they spend the day crying in their room. But I feel a lot of people get caught up in the idea that Valentine’s is ONLY for lovers, rather than it being a day about love in general. People don’t really celebrate love you can have for friends, family and most importantly yourself. So to celebrate some self-love, here’s Two Happy Cat’s Guide to treating yourself this Valentine’s Day!

Check Out Some Cute/Funny Games! 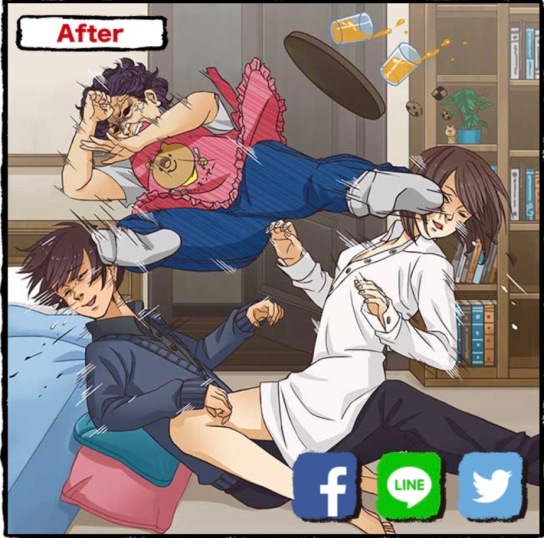 I’ve written about this game, but dear me, if it isn’t perfect for Valentine’s Day. ‘Mischief to Couple‘ is a hilarious short and free mobile game where you break up happy couples. It’s a very simple tapping game and can be played while you chill out in bed with a nice hot chocolate or cup of tea! The illustrations are hilarious and I gotta admit I do feel very giddy destroying those happy couples.

Other fun games I recommend are Mandrake Boys / Mandrake Girls, where you collect really lovely images of gorgeous guys/girls. I personally find the game to be very relaxing. It’s very exciting when you uncover a rare mandrake and all the stories associated with each set are very sweet and heartwarming. If you want to play something a bit longer, I recommend maybe checking out a dating sim. Hey, if you’re feeling a little lonely, there’s nothing like a 2D waifu/husbando to put a smile on your face. If you haven’t played dating sims before, I recommend going with Hatoful Boyfriend. It sounds very silly – you date pigeons – but it does have quite a gripping story behind the bird veneer!

So this is an anime blog, so let’s start with that! I recommend checking out Netjuu no Susume, it is a romance anime so it may make you feel some lonely feels, but it’s still really funny! If instead of some love you just want to watch something more singular but still heart-warming check out She and Her Cat .For some great, and often pervy, laughs 10/10 gotta recommend Prison School.

Besides anime, I also recommend finding a really nice youtube channel to binge! There are some really great Aniblogger’s who have youtube accounts as well like Gigi Palooza and Lita! I also really like watching a channel called ‘The Crane Couple’, they play a lot of Arcade games and they’re Japan Vlogs are incredible! Just generally try to find some youtubers who produce content you enjoy but also are very positive!

Ok so not really Otaku related, but I just wanted to recommend you to finish off you day with a REALLY nice meal. I mean you don’t have to go to a fancy restaurant but eat something you reserve for special occasions – get a pizza, kfc, or order some delivery. Perhaps don’t leave the house, you’ll have to battle through all the couples going out to romantic dinners, but hey put on some Netflix, eat your pizza, and have a great night!

I hope you enjoyed reading this post. I know it’s been a little silly, but the main idea that I wanted to put across was that being alone on Valentine’s isn’t the end of the world. Spend today having a good time either by yourself with friends or family. The most important kind of love is loving yourself. So Happy Valentine’s Day!