I’ve been watching anime for most of my life, so I can tell pretty quickly if I’m going to like something. At most it takes me 3 episodes to decide whether something is worth my time. Is the story interesting?  Are the characters tolerable? I am having a good time? 3 simple questions that I somehow ignored when I came to the Parasyste anime. The series follows high schooler Izumi Shinichi, whose right hand has been taken over by a parasite. The parasite, named ‘Migi’ is one of thousands that have descended upon the world. Unfortunately, not all of them stop at the hand, with a majority taking over a host’s brain and surviving by eating humans. 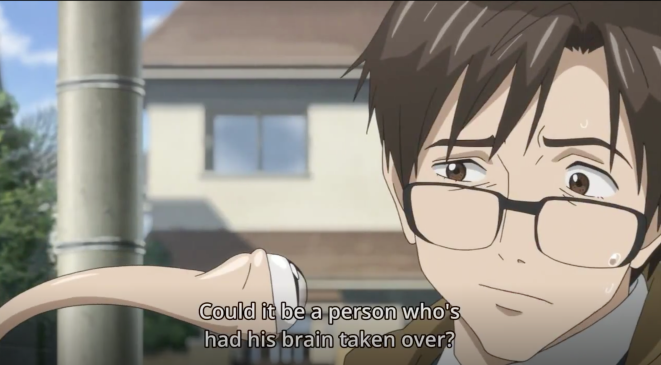 Now the series on the surface has an interesting story. You’ve got a secret alien invasion, a high schooler whose trying to adjust to a cohabiting life and an alien trying to work out its purpose now that it’s stuck in said high schooler’s hand. The general animations are quite good, I was particularly impressed by the fluidity of Migi’s movements and the gruesome designs of the various parasites. But all of that can only sustain a show for so long. In my case, 12 of the 24 episodes, I made it half way. So what ruined this series for me? I couldn’t forgive how absolutely stupid every female character was. Now before you think me too harsh, just hear me out for a moment. 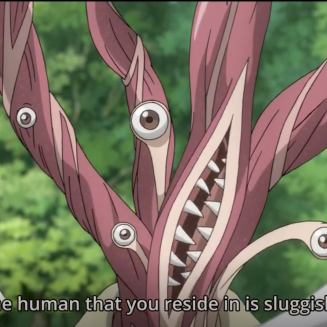 In the twelve episodes I watched there are five female characters of importance – Shinichi’s mum, love interest girl, glasses girl, psychic girls and the female parasite. Now, female parasite aside (as I understand she becomes a major figure later on), Shinichi’s mum was pretty interesting characters, but she only really served as plot points to push Shinichi’s development.  And that’s the crux of it, all the female characters are there to only serve as puppets to show Shinichi’s character arc, there’s nothing really there for them. They’re mindless and stupid, almost purposely putting themselves in danger so Shinichi can come to the rescue and an epic fight can break out. Honestly can you imagine someone really confronting a creature they think could be a monster and telling them “oh maybe don’t kill humans anymore, pretty please?”.

Let’s not even get started on the girl who every 5 seconds needs to clarify who it is that she is talking to. Every time you see her, you know the inevitable is going to come out – “are you really Izumi?”, like a parrot repeating the same catch phrase hoping for some added effect. I know this series is based on a manga of the same name, so perhaps there wasn’t much wiggle room in terms of characterisation, but gosh they could have at least made her a bit more interesting. You may be wondering why I’ve been focusing on female characters. To be honest the male characters aren’t much better, there’s no real fleshing out besides Shinichi, but hey, at least the male characters don’t run to their deaths just for the sake of ‘plot development’.

It’s rare for me to write about a series, without having watched the entire thing. But to be honest, I think I gave it a good shot. I’m just sick of watching anime, mainly shounen, create character arcs built on the corpses of female characters. Sure, shounen is a genre aimed at a male audiences, but so what? Why can’t a series feature both strong male and female characters, without ‘shock’ plots and miserable attempts to make audiences care for our protagonist by killing off his nearest and dearest. Overall a rather dismal 6/10 , I really hoped for better.

18 thoughts on “Parasyte: The Maxim Review – I tried to keep watching, I really did.”