When I watched the first episode of ‘Akkun to Kanojo’ 12 weeks ago, I didn’t really know what to make of it. The series has 25 episodes of which 13 have aired, each 4 minutes long which mainly focus on a high school couple featuring Akkun and Nontan. Akkun is head over heels in love with Nontan but ‘hides’ his affection by being overly nasty. Nontan is ‘understanding’ and loves him anyway. In my review I gave it a harsh 1.5/.5 as I couldn’t stand Akkun’s awful behaviour to his girlfriend. Many writers have classified Akkun as a tsundere character. For those who are unsure on the terminology, tsundere are an iconic part of anime, these characters are described as those that initially act aloof and perhaps rude to their love interest but slowly warm up and eventually becomes lovey-dovey (Urban Dictionary). Now I actually wrote this review out BEFORE realising that we’re only half way through the series, but nonetheless my opinions still stand. If my opinions have changed after the next 12 episodes air, I’ll write another post 😜 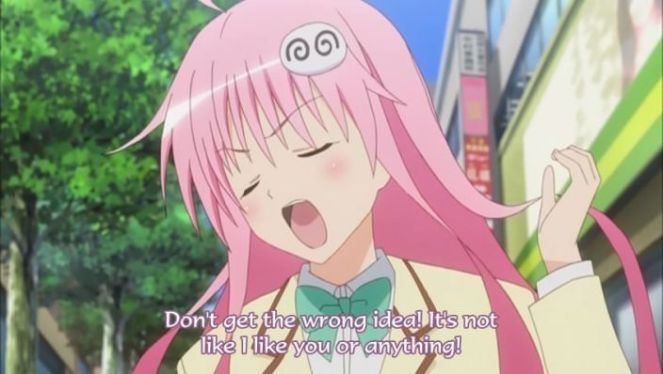 After my initial shock at the series and Akkun’s behaviour I tried to rationalise it by pushing Akkun into this ‘tsundere’ box. I told myself to keep watching, he’ll warm up, he’ll stop calling his girlfriend ugly and gross, he’ll stop telling her to go away and that she’s annoying. But he never did, rather than a ‘tsundere’ Akkun is just a bully. I know what you’re thinking my dear reader – chill out! It’s just a short comedy show, don’t be so serious! But honestly, it’s kind of weird to see such awful behaviours be seen as ‘funny’ when honestly they’re frightening. The series focuses on drawing laughs from the audience through the contrast of ‘nasty’ Akkun and his lovey-dovey self. By the end of the series I honestly couldn’t tell which one was worst – the Akkun who spoke harshly to his girlfriend, or the Akkun who casually talked about eating her dead skin. But what really cemented my discomfort with the series was one particular scene. It was in episode 6 when Akkun goes over to Nontan’s place for dinner. As Nontan waits for Akkun to arrive her father arrives home and we get a quick glimpse into her family life. Nontan’s father acts exactly the saem to Nontan’s mother as Akkun acts towards Nontan. Nontan even giggles as she thinks about how cute it is. There’s another scene in episode 11 or 12 when Nontan dresses in a yukata and goes to show her father who simply responds “well, you don’t look bad.” This isn’t ‘cute’ or ‘endearing’, this is revolting. This show was neither a comedy nor a romance for this couple – it was simply a guide for men  ,on how not to act and women, a warning to run as fast as you can from boys like Akkun. 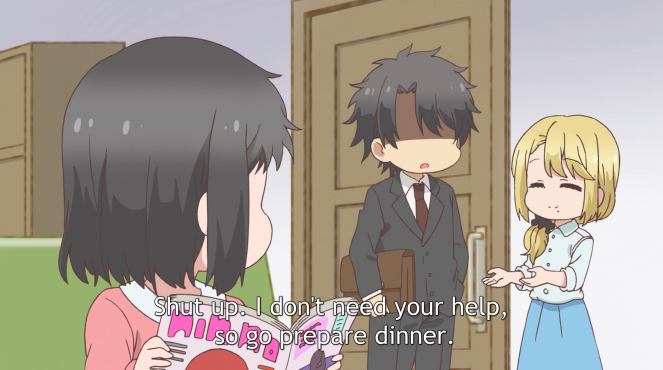 The anime does also have 2 other ‘couples’, one is Akkun’s sister and his best friend where the sister’s tsundere behaviour is actually sweet! The other is a student/teacher relationship but it was portrayed as a one sided love from the student (thankfully, I have my own qualms about those love stories). Unfortunately these stories were overshadowed by the distasteful relationship between Akkun and Nontan. I’ll have to stick to my rather poor rating of the show as despite the adorable graphics, and interesting side stories, the main story left me feeling disgusted. 4/10