Hello there! I’m Myxprint, one of the few writers from Blah Bidy Blah. While you usually find my thoughts and opinions regarding Otome exclusively on Twitter since BBB focuses on walkthroughs; I was ecstatic to receive an invitation from Two Happy Cats for a Top 5 Favorite Otome Routes collaboration. On my top routes, you may notice each character/route belongs to a different game and developer. Mainly to narrow my choices down, haha. Also, for the sake of narrowing down options and making sure routes were available in [almost] all the versions of specific Otomes, I chose character/routes available in the English versions.

Those of you out there tend to expect at least one Several Shades route included on my list and I live to meet expectations.

ALRIGHT! If you love sassy MC’s who never fear speaking out against Sengoku warlords, Ikemen Sengoku is one for you. I have a general love for IkeSen and all its characters, so selecting only one for my top 5 list was a challenge (Mitsuhide was my first choice, haha).

First of all, allow us all to show our love to Azuchi Castle’s Mother Hen. Yeah, Hideyoshi has an almost unhealthy love for Nobunaga. Yeah, he treats MC rather coldly in the beginning – because of his love for Nobunaga. Yes, it can be rather difficult to romance him, due to his brotherly affection towards MC. I get it, pursuing Hideyoshi may get rather tiresome, but I absolutely adore him and his route.

Upon the English release of Ikemen Sengoku, Hideyoshi’s appearance alone drew me in. In my eyes, his character design gave off a sense of warmth and security. After reading everyone else’s route before pestering the Mother Hen, I was rather excited for his route and it certainly delivered. In the beginning, working to earn Hideyoshi’s respect felt like a game of tag; although, this worrywort gave in pretty quick. He always wanted support MC and treat her to gifts and sweet treats; though, when it came down to romancing the poor guy…. CYBIRD WANTED US TO SUFFER. And, despite all the suffering, I enjoyed the opportunity to pursue this Nobunaga-crazed warlord who, at first, only saw us as a “little sister.” Like, damn Hideyoshi, we were in the “friendzone” far before our strange relationship took off… haha.

By the end of Hideyoshi’s route, I would happily side with the MC on her decision to stay in the Sengoku period with him. Although, our “friendly,” neighborhood snake (Mitsuhide) may steal me away if Hideyoshi’s not careful. ;3 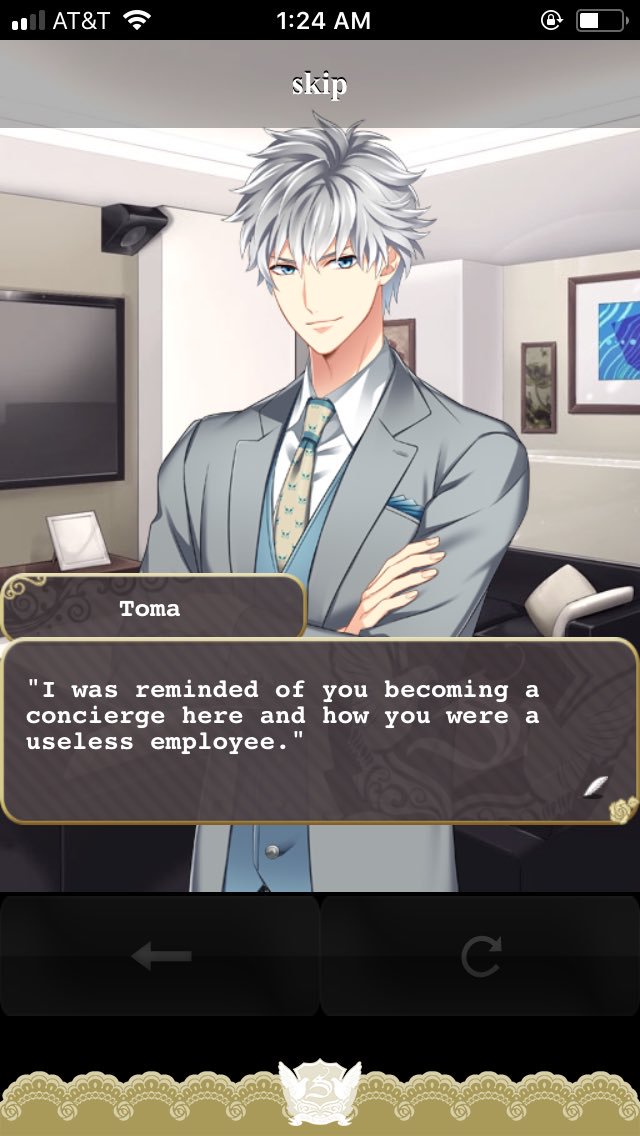 Over a year ago, Arithmetic released the English version of Several Shades of Sadism. Starring a rather sassy MC, according to Arithmetic standards, you are a concierge at the Royal Shining hotel recently promoted to the penthouse suite after the head concierge collapses. Living in the penthouse are the six Kira siblings: Rei Shindo, Toma Kira, Chiaki Kira, Minami Kira, Shizuka Kira, and Mei Tarantino.

Now, my favorite route [currently] available in the English app is Toma’s. This gorgeous man is the Japanese branch manager for the Royal Shining and you decide to serve as his personal concierge quickly following your original promotion. Without a doubt, the reason Toma is my choice out of a cast of sexy brothers is due to his mutual respect for MC despite his harsh attitude towards her. He makes a point to correctly discipline his employee (MC), fine-tuning her to assist her towards her dream. For those who don’t know, MC desires to become a concierge of the British Royal Shining (managed by Chiaki). Despite the heartache of his cold atmosphere and insistent need to remind MC he does not need her, Toma makes the top four on my Several Shades list.

If you’re curious, my top SSS routes are Alan and Rintaro; but due to the fact these routes are not available in the English app yet, Toma was my top choice.

Step into the world of princes! As the MC, you work for a translation company when your childhood friend (Midori) suddenly calls in a favor: attending a gala complete with celebrities and princes in place of the original translator hired by Midori’s company. In the English app, you can play the routes for Prince Edward, Prince Rene, and Prince Asim.

Let’s jump back a few years ago to my first few Otome games/route, Royal Midnight Kiss was the second mobile Otoge I pursued and Asim was my first prince. Not only is his character extremely down-to-Earth, but he clearly values the MC’s opinions, despite hiding a secret. Meeting first in a bookstore, Asim (at the time known as Lyle) appears rather reserved and awkward, insisting upon purchasing a book both he and MC were interested in. Okay, let’s be honest, I love Asim and his love for books. End of story, haha. Throughout his route, I grew to love and hate him as a character. Initially meeting this handsome prince as Lyle, you fall in love with Lyle but somewhere along the line, he’s utterly frustrating to deal with because he refuses to romance you plus his guards Khalim and Sahir (especially Sahir) don’t make your romance any easier once you discover Asim. Everything said and done,I love Asim and his route for his devotion to his Country/people, his pure adoration for his younger siblings, and his desire to protect those he holds dear.

Kyosuke. This man gave so many reasons to both love and hate him, in the end, he stole my heart. To put the game into perspective, as the MC, you are a single mother, living alone. Nearing the end of your savings and with no ties to your daughter’s father, you must quickly find a way to support the two of you. Virtues of Devotion gives you the opportunity to choose between Kyosuke Usami, Kei Sakaki, Rei Sakaki, and Yukinari Morishige (your daughter’s father).

At the very beginning of Kyosuke’s route, I loathed him. I mean, this egotistically guy forcing himself into you and your daughter’s life? No, thank you. We have plenty of other routes with the same type of man. HOWEVER, moving past the initial first greeting and “I want you to become my wife on the first date,” he began to redeem himself with his childlike outlook on life and love. Stepping deeper into his route, I found out his seemingly domineer self is based on minimal exposure to “normal,” everyday life, plus his desire for revenge (I will not spoil this for those who wish to read Kyosuke’s story).

The biggest reason Kyosuke made the list is because of the depth of his story. While at first glance his route appears very boring or cliché, his interaction with Seina (MC’s daughter) and earning respect through her was rather unique. Of course, Kyosuke is almost too innocent despite his business knowledge and you, as MC, are right there to teach him the ways of the world and soften his desire for revenge with little Seina. 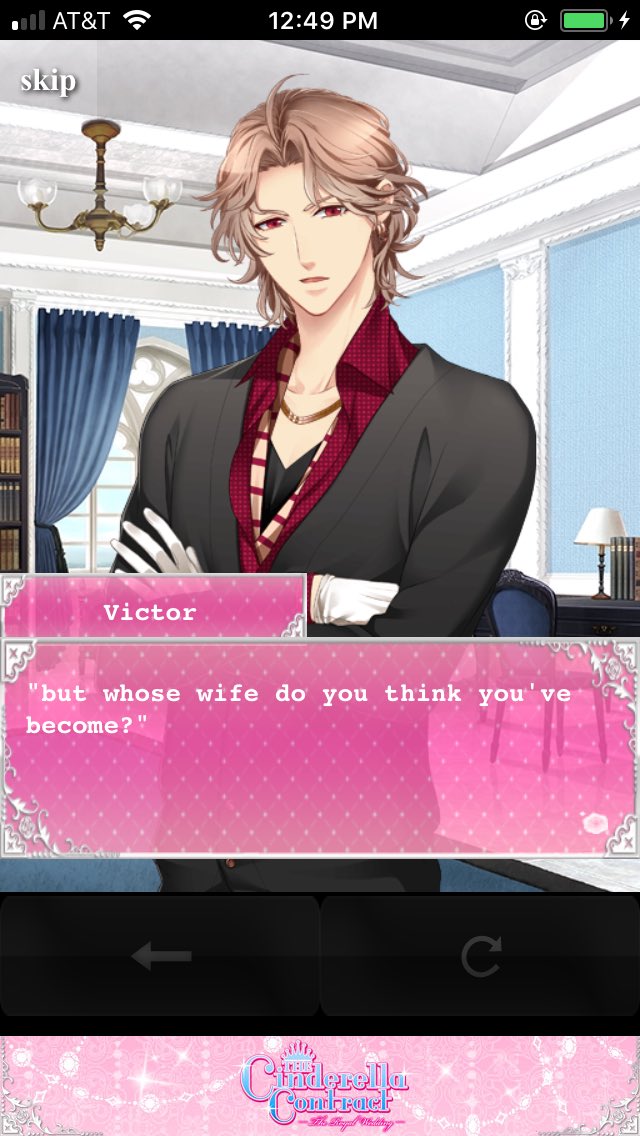 Victor’s route is the newest route available on The Cinderella Contract’s English app. He is not a prince like many of the others, Victor is the Duke of Alitia. Many of you may know, the grammar/syntax errors in this particular Arith game can be rather irritating; however, moving past them, Victor’s route proves to top my list on TCC routes (though, if we’re honest, Kyle is my #1 prince).

Being a fan of routes similar to Victor’s in Arithmetic’s pool of Otomes (Murayama/Kokonoe from Several Shades, Ayato/Soichiro from 7 Husbands, & Liyue from Oriental Bride), Alitia’s Duke proved to contain a mixture of these characters and I love him for it. As a suitor, he may be one of the more difficult ones to pursue, simply because he only sees MC as his contracted wife and not a potential love interest. Contrarily, and what makes me love him, are the slivers of kindness he accidentally shows while you slowly chip at his heart. I mean, yeah, you are wanting to break free of the Trieste mansion under the circumstances you were brought there; however, between Victor’s reluctant kindness and Serge showing up as comic relief, I thoroughly enjoyed Victor as a character along with deciphering the meaning behind his cold shell and the gloves.

Seriously, if you move past the writing mistakes, Victor’s route is rather intriguing and a reason why he made it to the top 5. Oh! And Victor apparently has a talent to make MC’s ears cry, haha.

Ah… well, I gave in towards the end and adding another Arith-Metic character on my Top 5. ^^;;

But, let’s be honest, Myxprint loves all things Arith, haha. I mean, just watch my Twitter feed during Several Shades of Sadism events. Hopefully you all enjoyed my top picks and I’d love to hear who you love the most too! Selecting only five proves to be a challenge and, rest assured, I have MANY other favorites aside from these wonderful routes/men.

Finally, I want to thank Two Happy Cats for inviting me to participate in this collaboration post. It has been a true joy writing an actual blog post for the first time in months.