Speakeasies, swingers and mobsters, step into 1920s America with Argent Games’ latest VN ‘Your Dry Delight’. In the game you play as ‘soft-boiled’ detective Richter working to shut down secret bars and enforce the prohibition (an alcohol ban). Working with you is air headed, yet quick witted Leslie, and working in the shadows is charismatic mob boss Meyer. Which of these devilishly handsome men will steal your heart?

Where to buy? Free on Steam & Itch.io 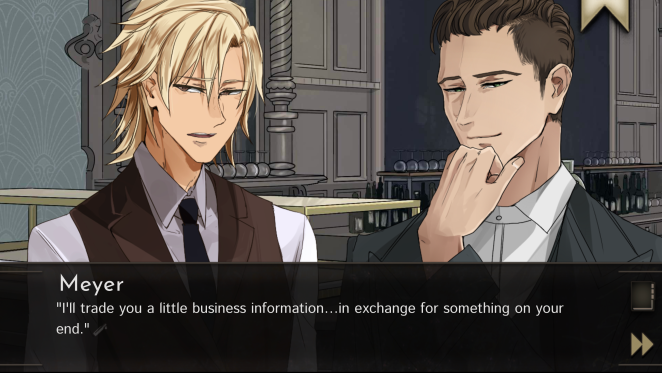 In Australia we aren’t taught much about American history, and definitely not much about 1920s. The closest I got to it was learning about Don Marquis poems in Year 11 English. Other than that, the best references I had was ‘The Great Gatsby and an anime called ‘91 Days‘. So I was really excited to jump into that era and hopefully learn more about it with this game, and I certainly did. The most obvious point is the glossary terms that the game contained, with historical terms, slang (like ‘bump off’), and little history tidbits. The music itself had a great jazz tune, and the character designs reminded me of the mobster and detective characters I had seen numerous times on TV. 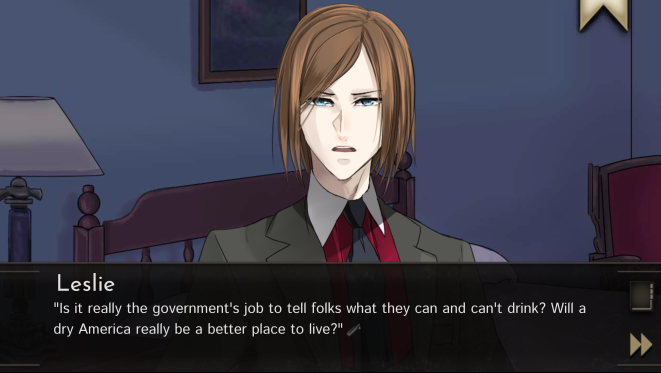 As I mentioned in the ‘quick info’, the game has two romance options but only one ending. You have to finish both romance options before reading the single ending, the game will prompt you to restart. I would have liked to have spent a bit more time with each character, I felt the time just slip away from me, and just when I started to scratch the surface it was finished. But in saying that, it was really interesting to get some of the character’s political and philosophical thoughts on prohibition and freedom.

For anyone who has been thinking of buying Argent Games other works, I highly recommend checking this game out. It’s a great ‘teaser’ of all the fantastic work that they do in their longer commercial games, from the writing to character design and music. I really enjoyed the game, just a shame it ended so soon, would have loved to have spent more time in Meyer’s arms 😂. You can check out my reviews of other Argent Games’ games over here. Also stay stunned for their upcoming game Red Embrace: Hollywood, you can find out more about the special project over here.