Just over a year ago, MangaGamer released their first otome localisation. If that wasn’t exciting enough, it was also one of the first R18+ otome games to be translated for a Western market (that wasn’t a mobile app). In the game you play as Ema Tachibana, a high school student who would like nothing more than to fade into the background. With her incredible height and resting bitch face, she gets more attention than her socially-awkward self can handle. Well, when it rains, it pours, and her life gets a heck of a lot more complicated when she’s approached by two handsome guys who want her to become their fashion model.  Jostled between the muse-obsessed masochist Miki and the eagle-eyed sadist, Saito, will our sweet Ema bloom into a fashion icon?

My play through order:  Saito –> Miki (but order doesn’t matter)

I’d heard a lot about the game from other bloggers / social media, so going into it, I was a little worried my expectations would be too high.  The first thing that stood out to me was the game’s humour. There’s heaps of crazy jokes and fun references throughout the game, I was grinning  or laughing throughout my entire play through. I also really liked the art and character designs, especially the designs of Miki and Saito  whose sharp personality contrasts were reflected in their character sprites. Note, Miki’s almost puppy-love adoring aura versus Saito’s cold look. I especially adored the chibi pictures that appeared during funny scenes or bad endings. For those of you who will be playing the r18 version be prepared for some very steamy CGs!

I was pleasantly surprised by how much I liked Saito’s character. Usually, with those sadist character I get very frustrated and want to give them a good telling off! But Saito was actually quite the charmer. I did feel, however, that his relationship with Ema didn’t have much substance, it happened very quickly and at the end didn’t feel resolved. On the other hand, Miki’s route, which I enjoyed more, unfolded in a pretty traditional way with confessions and misunderstandings abound. But, in both routes it was heart-warming to see how all three characters help one another to achieve their dreams, build each other’s confidence and generally look out for one another. 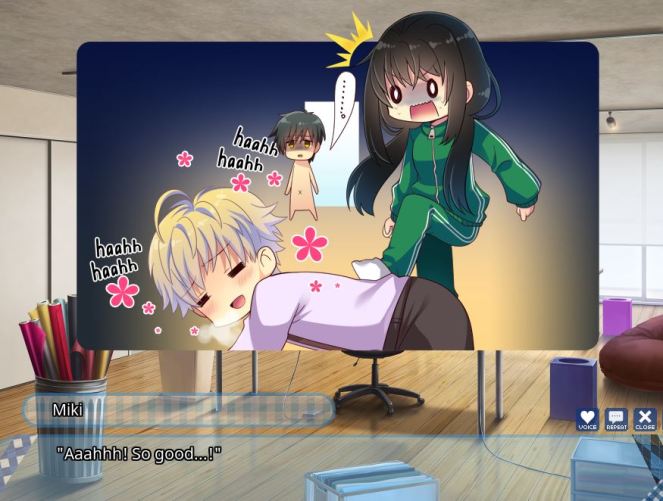 I also want to make note of what an incredible job the translator, Molly Lee/ Verdelish did. Recently, I tried my own hand at translating (to practice for my upcoming N4 exam), so I have an inkling of how hard a job it is! It’s not just a matter of translating things word for word but also keeping in line with the character’s personality and cultural nuances on both sides (Japanese and Western). It’s a tough job, and Molly did fantastic work, especially with the pop culture jokes and Saito’s rough and tough way of speaking.

Probably my only, and perhaps a big, reservation with the game was Ema’s voice. I don’t know why but it really grated me. It was especially bad during the first hour or so of the game when she was screaming and freaking out. This might sound unnecessarily harsh towards the voice actress, but Ema’s voice never struck me as that of a high school girl. The voice sounded a lot older. However, by the second half of the game, the voice did become a bit more stable and softer, so I was able to get used to it.

This was definitely a fantastic game for MangaGamer to kick off their otome localisations. ‘Fashioning Little Miss Lonesome’ was a game full of laughs, with some colourful love interests and a very unique protagonist. I’m glad I downloaded the r18 patch, it made the game a lot more smutty, I mean, special!  Currently, we have two other otome localisations to look forward to from MangaGamer, including another r18+ game called Fxxx Me Royally!. It’s definitely a very exciting time for otome fans.

Article contains affiliate links. Thank you to Manga Gamer for providing me with a review copy of the game.