Earlier this year, on Valentine’s Day in fact, Otome Romance ( formerly known as Voltage Inc.) announced a brand new game. Ayakashi: Romance Reborn definitely caught the attention of all otome fans, with incredible art, an interesting premise and a kickass heroine. In April, I had the opportunity to interview the game director of the localised Ayakashi: Romance Reborn, Ryan. We discussed the exciting features and immersive story you can expect when the game releases later today.

Ayakashi: Romance Reborn seems like quite a big step in a different direction for Otome Romance, besides visual novel mechanics what other new elements can players expect? 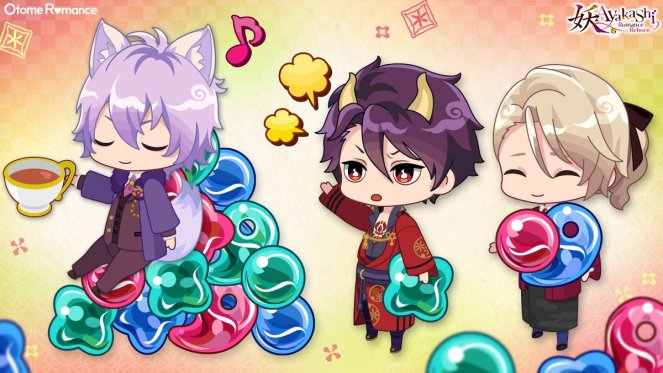 This is an otome game most people outside of Japan have never seen before, and it’s definitely something that will take Voltage Inc. fans by surprise. Players not only get to experience a story that’s on par with some of the best fantasy-action manga and anime out there, but they get to live it, too. You patrol the city with your gorgeous Ayakashi hubbies, you battle enemies alongside them, you help run a quaint little café… There’s a lot to do in this game besides just romancing the characters. I usually describe the game by just saying “Imagine an otome and a stat-raising RPG had a baby…”

As Otome Romance has a mixture of free-to-play and paid games, how will Ayakashi: Romance Reborn sit?

Ayakashi: Romance Reborn is free-to-play in the best way possible, I think. Every story segment the player unlocks remains unlocked forever, so you can go back and re-read sections anytime you want. There’s always something new to do to keep you coming back every hour of the day.

While all the characters are absolutely gorgeous, is there one you secretly think will be a big hit with players?

Oh, it’s no secret, but I think either Kuya (the Tengu) or Toichiro Yuri (the Kitsune Fox) will be gigantic hits, if for no other reason than they’re ridiculously attractive. I have a pretty heavy bias for Koga Kitamikado (the Oni Ogre), so I’m doing all I can to promote him… The world needs more Koga fans! I mean, who can resist the plunging neckline and those amazing pecs? But I love all the characters to pieces, and I hope fans love them, too.

Futaba seems to be part of a growing movement for stronger, more autonomous otome heroines. Can you discuss a little more about what makes Futaba special and how audiences will be able to connect with her?

She's brave, doesn't take lip from anyone, and has a magic wand.
What more could you want in an otome heroine?
Who's ready to fall in love with our feisty MC, Futaba Saotome?!#AyakashiRR #VoltageInc #OtomeRomance pic.twitter.com/DjL1fNiVEa

I and the other translator on the project love Futaba to pieces. In our eyes, she is truly the ideal otome heroine. She stands up for herself, but she’s smart about it; she picks her battles. You certainly won’t find her mouthing off to the elite people with whom she brushes shoulders. She’s brave without being stupid about it; you will never see her running head long into danger for which she’s not prepared. Also, her story, at its core, will resonate with a lot of people. She isn’t some super-human person with immense powers right off the bat; she struggles, like all of us do, to become a better version of herself. I think Futaba and her characterization are what really make Ayakashi: Romance Reborn as incredible as it is.

In the trailer, we can see the Dawn, Twilight and Night factions, if Futaba has to choose one of the factions, how different will each playing experience be? 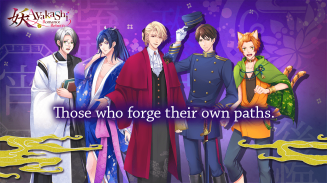 Each faction has its own common route, each one more different than the last. You will not get the same experience out of the Dawn Faction’s story as you will out of the Twilight Faction’s story. The core gameplay remains the same, no matter which route you choose, but their stories are wildly different.

Will Ayakashi: Romance Reborn be an ongoing project with new content added over time, or will players be able to complete the game when it’s out?

A mixture of both, really! Ayakashi: Romance Reborn will receive frequent updates that add characters, more factions, and events, but certain characters will be available in their entirety right from the get-go.

The game features the voices of some big names in the VA world, can you give us some examples of romantic lines fans can look forward to hearing?

This is a line I just wrote this morning for one of my favorite characters, Yura (a Tsukumo-gami Dragon Flute). He’s over 1,000 years old and stubbornly refuses to adjust to the changing world, so he has this amazing Shakespearean way of talking that was a blast to write.

Yura: “Our love hath no need for language. Though, in truth, I wish I had the words to adequately express my heart.”

It was Koga’s birthday earlier this month [May],  when the game is out, will there be special events to celebrate each boy’s birthday?

May 7th is Koga's birthday!
Do you have any burning questions for this Oni Ogre?
Ask them in the comments and Koga may just reply to you!

Yes, of course we plan on doing something special birthday for the boys’ birthdays! I can’t get into specifics, suffice to say that it will be something that character’s fans definitely won’t want to miss!

Thank you to Ryan for taking the time to answer my questions. I’m so excited to check out the game when it’s released today. Make sure to visit Two Happy Cats later tomorrow for a first impressions post of the game.

9 thoughts on “Interview with the Localised Game Director of Ayakashi: Romance Reborn ”