In my last trip to Japan, at the top of my shopping list was to buy some craft kits. I ended up being overwhelmed by the incredible variety there were in massive stores like Loft and Tokyu Hands. But amongst all the choices, I fell in love with a series called  PAPER THEATRE by Ensky. With this kit, you essentially crate a 3D image by stacking layers of paper on top of one another. These can create a scene from a series or film, or just a general image of characters posing together. The series has a wide variety of iconic images you can choose from such as Star Wars, Hatsune Miku and Pokemon. Seeing the done up displays all together, I couldn’t believe how awesome they looked. I ended up buying way more sets than I had time to do…until now.

Most of the kits are a standard size, however some can come in a larger size, especially the Pokemon group shots. The kits are a little bit on the expensive side, when I was over there I bought my normal sized kits for about $15 AUD and a large Eevee one for $25 AUD.  On top of this, to complete the kit you’ll need to buy a few extra tools. Thankfully, these won’t set you back too much. I ended up buying a cutting board, scalpel, tweezers and glue from Daiso for about $10 AUD and they have served me well!

Within the kit you receive the various coloured paper and instructions. I’ve bought some kits with English instructions and some without, and to be honest it doesn’t make much of a difference. I tend to just follow along with the images. The coloured paper also makes this extra easy as it has printed next to each cut out what number ‘slide’ it corresponds to and whether you are looking at the ‘front’ or ‘back’.

So what do you actually do? Each kit has six key layers. Each layer forms part of the overall scene, for example with the small Eevee kit I have, the first layer is a frame, the second is Eevee, third layer is Jolteon and Flareon, the fourth is a background, the fifth  is Vaporeon and the final layer is another background.  You follow the instructions to cut out the coloured sheets of paper and stick the parts on each layer, building up the images from the various cut outs. At the end you line everything up together and ta-dah! you have your 3D image.

My favourite thing about these kits is that you can’t really mess it up. As long as you’re patient with glue drying, and pay careful attention to the instructions there’s not much room to go wrong. But even if you do go wrong (and trust me I have) – mistakes aren’t really noticeable. It’s only when you’re really looking at where things don’t match up, that you can see mistakes. Otherwise from a reasonable distance, whatever you make looks pretty amazing. For example after doing the Eevee below, I realised I had pasted everything on the back side, not the front. so everything was opposite to what it should be. As such the blue and white eye papers didn’t match up and the eyes looked a bit wonky. So I used some black maker and on the final product, you can’t see it at all!

Perhaps the only thing that really frustrates me about this product is the final step, which is placing the layers on these tabs to space them out. Now, this is probably the most crucial step of the whole thing. It creates the 3D effect and just generally makes the whole thing look nice and structures. But gosh if I don’t manage to mess it up every time I do it! It’s just so fiddly and frustrating. The first tab is easy enough to put on but every additional one you do gets more and more annoying. I wish there was a way to make this final part a bit less annoying. Especially as unlike the other areas, if you do mess this up, it does show!

Overall, I have a lot of fun with these kits. I tend to do them over a couple of days, but if you were keen you could probably complete it in an afternoon. The kits all together look fantastic, and they’re a great display item. You can even buy display cases to protect your work from dust. I’m not sure how much they usually run for, but I purchased mine for only 400 yen on Amiami! Overall, if you’re looking for an easy and satisfying craft project to do while you’re at home, I do recommend giving these a shot. They’re such good fun and you’ll end up with a gorgeous new art display! 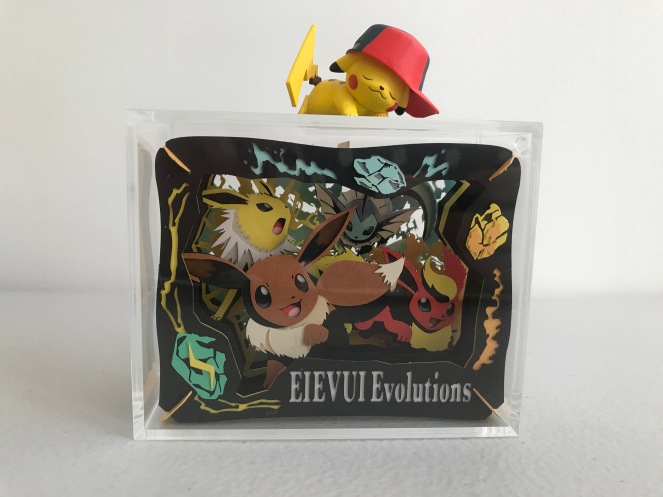