Since the latest Hatsune Miku game was released in Japan mid February this year I have been anxiously awaiting news of a western release. Today, Sega announced that the game will be available on the Nintendo eShop from 15 May 2020. It appears that currently there are no plans for a physical release of the game. Pre-orders for the game are open, with the game at $60 AUD and the bundle at $90 AUD. The bundle includes the main game plus all six song packs which usually cost $10 each. Sega has also announced that if you pre-order the game, you receive a special theme song pack earlier. This theme song pack appears to be free for all players and will be released in June if you don’t pre-order. But before you spend your monies pre-ordering this game, let’s have a look at what the demo was like!

Pre-order now on the Nintendo Switch eShop to get access to the free Theme Song DLC Pack on launch day!https://t.co/mQIAQTmka8 pic.twitter.com/O57H8IeKRG 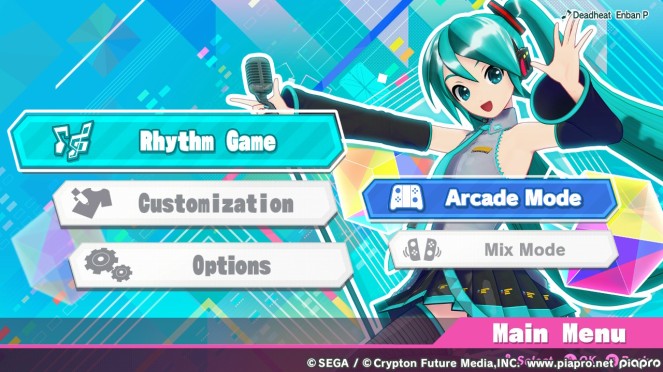 The demo includes two songs – Romeo & Cinderella and Arifureta Sekai Seifuku. Both songs can be played across all difficulties on arcade (easy, normal and hard)  and mix mode. Included in the demo is also each song’s recommended module (outfit). Besides that, you can also view the music video without playing for each song and also add some special conditions like no fail mode or showing no notes. It’s very reminiscent of previous Project Diva games and won’t be much of a shock to older players. The demo version does not include a tutorial mode, but I’m sure new players will be able to pick things up easily.

What is new to the game is the aforementioned ‘mix mode’. In arcade mode you press buttons according to notes on screen in mix mode you move your controller and also press the ZL button to tap the pink or blue bars that appear. This mode is utterly mind boggling. It took me about five tries to finally get my ‘controller’ to move on the screen, otherwise it was just stuck on one side as the notes passed it by. You’re meant to hold your controller on its side, and you’re almost gripping it like a bird claw. When I finally did get the hang of it my hand was cramping from the position. I ended up switching and sticking to arcade mode, which is pretty much same old same old. 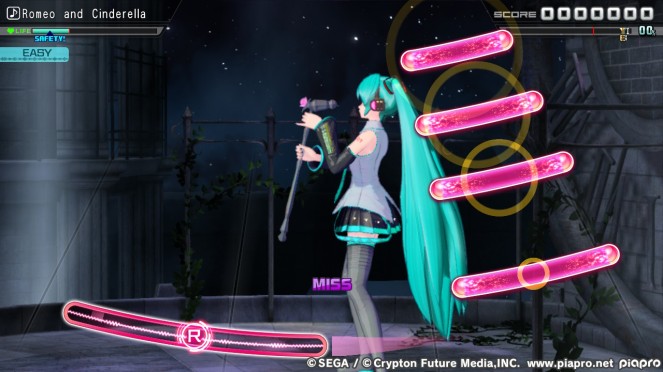 The game’s interface is gorgeous, the images are bright and colourful. You’re kind of immediately sucked into the world of Hatsune Miku. When I was playing the songs, I had the same impression of the videos. I thought the animations were smooth, the graphics sharp and the was overall just as impressed as I was with the PS4 Project Diva. But then I looked back at the screenshots I took for this review and it was a bit of a shock. For both songs, while the buttons and general info was clear and crisp, Miku was grainy.  She’s almost out  of focus. While it’s not a major deal breaker for me, I’m always going to buy a Miku game, it was disappointing. I’d expected an improvement from the PS4 Project Diva (which is gorgeous) and this was a let down.

As much as I dislike the mix mode, and the graphics have let me down I’m happy to see Miku back on a handheld console. While I enjoy the PS4 game, I miss being able to play while on the go. Most of my time playing the Project Diva vita games was on long trips or while waiting around somewhere. Miku has the tightest hold on my wallet, so it’s no surprise I’ll be pre-ordering the bundle. I don’t doubt I’ll have fun with it, after all it’s just more of the same old.