Last week I wrote about manga that didn’t leave much of an impression on me. Essentially, series that left me with the feeling of ‘meh’.  This week, I wanted to share some manga series I’m currently obsessed with.  Ones that I can’t wait to see what happens next, and anxiously await each new chapter. In this list, I’ve tried to have a mix of different genres so hopefully everyone can find a new read.

Mieruko-chan follows high schooler Miko who wakes up with the ability to see monsters. But instead of becoming a monster/ ghost hunter, she does what any reasonable person would – she ignores them. However, the monsters don’t always ignore her. The series doesn’t really have a linear story, more episodic shorts of Miko trying to avoid monsters. Nevertheless, I absolutely adore it. It’s such an interesting take on the ‘i see dead people’ trope, and oh my gosh the monsters look terrifying! But it’s not all horror, there’s definitely a schadenfreude element as you can’t help but laugh at how terrified poor Miko is.  It’s a horror, within a comedy, within a girl trying to live her everyday slice-of-life. Definitely a series everyone can enjoy! 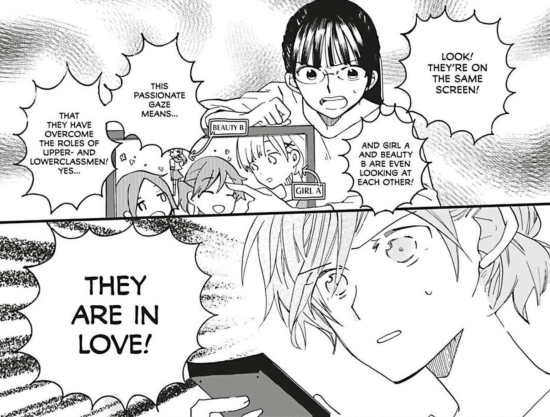 Shimizu seems like the average, plain office worker but when a colleague catches her selling GL doujinshi at a comic-con, she thinks the gig is up. Thankfully, Maekawa seems to have an interest in Shimizu’s hobbies, and Shimizu is more than happy to have a new found friend. But beneath Maekawa’s sunny disposition is a past filled with self-doubt and fear.

I. Adore. This. I haven’t had the opportunity to read much shoujo ai/ yuri manga, but the romantic relationship between Shimizu and Maekawa is one of the most realistic I’ve seen across all manga genres. There’s so much love and support between them, but there’s also misunderstandings, fear and hardship. Every issue that arises is worked through maturely, no ridiculous ten chapter misunderstandings, there’s communication and openness between Shimizu and Maekawa.Also, y’all know I always have a soft spot in my heart for series that feature otaku, and Shimizu is so relatable and such a funny main character.  This series should be on everyone’s ‘to read’ list! And now you have no excuse, TOKYOPOP currently has the first volume available for free as part of their Covid-19 community free manga program! 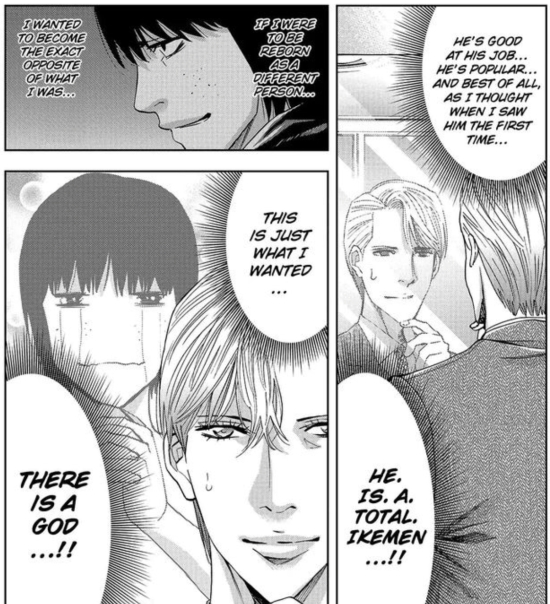 Saitou Yuichi has gotten the short straw in life. Fed up with it all, on New Years he visits an abandoned love hotel to end his life. But just before he does, he’s interrupted by Mitsumune Sakutarou, a man who by all appearances is ‘perfect’. An act of fate puts Saitou in Mitsumune’s body and so begins Saitou’s ‘perfect’ life. But beneath Mitsumune’s perfect exterior is a dark and terrible secret. Worse yet, he’s out there and he wants his old body back, at any cost. There’s so many twists and turns to this series, but at the same time the story progresses so smoothly. The author manages to create so many different story threads – the mystery of the body swap, Mitsumune’s past and Saitou trying to keep Mitsumune’s murderous tendencies under wraps – all of which seamlessly interlink and inform one another. It’s such a tense and intriguing series, and I can’t get enough of it!

High schooler Tanaka Ayumu has a crush on his senpai, the president, and only other member of the school’s Shogi club. But he makes a resolution that he won’t confess to Yaotome Urushi until he manages to beat her in a match. Each chapter is only about 9-10 pages long and while the romance is a overall theme, largely the series is made up of episodic gags. Nevertheless, this manga is my favourite relaxation read. It’s so heart-warming and wholesome! Ayumu so straight forwardly tells Urushi how adorable she is, and her reaction is priceless. Urushi is, and I’m not exaggerating, one of the cutest manga characters ever. The series isn’t heavy handed with its romance, it’s a nice sweet slow burn, and overall a lovely read.

Well, we’ve finally done it. We’ve pissed off the gods enough for them to end all of humanity. But one Valkyrie is fighting in our corner. During the gods’ conference on humanity’s end she stands up and strikes a wager. Humanity and gods will face off in a  one to one duel over thirteen rounds. If humanity wins, we all live, if the gods win, we all die. This is a heart-stopping fighting manga with humanity’s survival on the line! The other series in this list, I’ve been following for quite a while, but this one I only discovered about two weeks ago. It’s everything you’d want in a fighting manga – great action scenes, high stakes and even a little backstory to each fighter before they move off stage (one way or another).

I will say I do have one issue with it and that’s there are no female fighters. In chapter 5 they show a list of all the 26 fighters (gods and humans) that are up for batting. Not. One. Woman. I would have loved to seen Boudicca, or any historical female figure, go crazy on some divine being! On the goddess side, I can’t imagine Athena, Bast, Freya or any other war/fighting goddess just taking a back seat during the fighting event of the millennia! The Valkyries do play their own role, but it’s definitely the heroes that take centre stage. Ok, wait, I was meant to talk about how much I like this manga, not its flaws. But I think it would be remiss not to have a warning that this manga is quite the sausage fest.

There’s so many exciting and unique manga out there to find in all different genres. But there’s only a special few that end up holding a special place in your heart. While each of the listed manga are so different from one another, they all hold one thing in common – I can’t stop thinking about them. I hope that this list has helped you find a new favourite, now I’ll be off re-reading these ones.

Thank you for checking out this post, I hope you enjoyed reading it. To keep up to date with Two Happy Cats hit that subscribe button!