Death Mark is  the first in an intended series of Spirit Hunter games.  The game was developed by Experience and originally released on almost all consoles in Japan in 2017. In 2019 Aksys Games released the game in English for Switch, PS4, PS Vita and Steam. You play as a man who wakes up in a mansion with extreme amnesia. You have no memories of your life, who you are or where you are, the only clue is a strange bite mark on your arm. A doll, the only other occupant of the mansion, informs you that the mark is a curse from a spirit. Mark bearers are doomed to suffer and eventually die at dawn. As you try to uncover the truth behind your own mark, you help other mark bearers confront the spirits that cursed them.

Available On:  Steam, Switch, PS Vita and PS4. I am reviewing the Switch version. 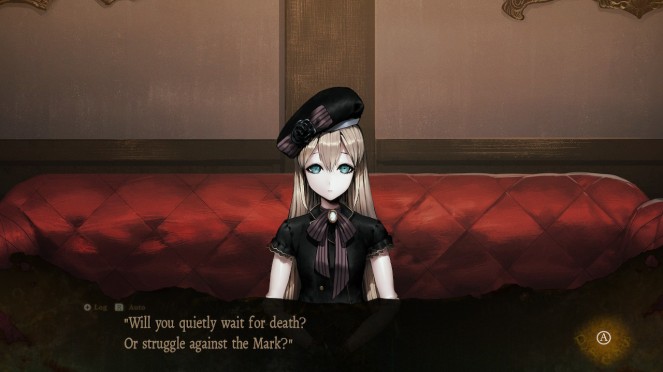 Death Mark follows one linear story route, you either survive each chapter or you die and have to replay until you survive.  However, the game does have two endings which is influenced on whether you can get everyone else to survive along with you! The game plays like a traditional visual novel with some puzzle elements. As you explore areas you can search around for items which can provide information or be used to open up other areas or unlock things. Each chapter culminates in a face off with the spirit in which you use your found items to fight against it.  There’s also quite a few dialogue and action choices, key among them the ‘live or die’ mechanic. In this mode a spirit has confronted you, using the information you have gathered you must make a timed choice. If you make the correct choice you survive, incorrect choices can lead to you loosing soul power (like a life meter) or instant death.

The story of Death Mark isn’t really anything too new. It’s ghost hunting, curses and urban legends all bundled together. But something doesn’t need to be new for it to be fresh. Death Mark provides an exciting, atmospheric experience as one delves into each spirit’s story. Each ‘case’ is intriguing, and you just as much want to save yourself (and fellow mark bearers) as you want to uncover the spirit’s history and resolve their grudge.  Character-wise, the game also shines. The main hero of the story is bold and daring. Even from right in the beginning when we have no sense of who he is, the game still manages to distinguish a strong and stoic personality. The game also includes an animated cast of other mark bearers who join you on your quest.  While there’s not much chance to jump into their backstories, they’re all incredibly unique characters, none of them fade into the background. I had a lot of fun seeing how the characters reacted to certain events and also interacted with each other. It was strangely realistic, and really pushed me to make sure they all survived, I couldn’t bear to lose anyone!

The other side of a visual novel is its art, and I really enjoyed the art of Death Mark. It seemed to have its own flavour, a mixture of body horror and the grotesque. My only complaint (art style wise) is that often CGs were so dark it was hard to really appreciate all the intricate details. But gushing aside, I did have one major issue with the art depictions, and it was the way women were featured. Any CG featuring a human woman had her barely clothed and in some awkward, strained position. The woman were obviously in pain, or maybe even dead, but they were so overly sexualised it left a bad taste in my mouth. It doesn’t just stop with the humans. In chapter 4 the female spirit has a horrifying face and grotesque limbs. She’s meant to be a figure to inspire fear. Yet, her body is wearing ripped clothing and underneath? Bright red lacy lingerie. I just couldn’t help roll my eyes. As you’re playing through the game, it’s jarring to go from a creepy atmosphere to suddenly a hyper sexualised image. Overall, it just brings  the sophistication of the game down.

As much as I adored this game’s story I did have some mixed opinions on the game mechanics. While this is a survival game, it does have a rather forgiving ‘game over’ mechanic. If you die during a ‘live or die’ point or final confrontation, you’re able to choose to restart the beginning of the scene, a checkpoint or choose an old save file in case you’ve missed something in your investigation. I have to admit, putting the clues together in this game was a bit of a struggle, and I was very happy to have this mechanic to try again. But even so, it did take me quite a few goes to put items together in the exact order and combination. After a while I very happily relied on a guide not just for clue guidance but also to navigate the actual game area.

The map, which you can see on the top left hand corner of the screen, drove me mad. You can only ever see one area in front of you and one behind you. Again, not as bad an issue if the map didn’t disappear as soon as you moved your flashlight! In some chapters where the search areas weren’t massive, it wasn’t a big deal, I could just remember where things were. But in chapter 2, where there’s over 20 different areas it just made the whole thing so frustrating.

A smaller issue that nagged me was the save function. While your playing the chapter it’s pretty easy to save – you can save anywhere while you’re searching and when you’re at the mansion. But it’s between chapters that’s irksome. Usually when I play a visual novel, once I finish a chapter I find that’s a good spot to put the game down. But once you’ve completed a chapter in this game, there’s no save option. Not even after you defeat the spirit. You need to complete the opening scenes of the next chapter before you can get to a save point. It just felt like after the satisfaction of finishing one chapter you were forced into the next, no chance to savour the story you had just completed.

Ultimately, the game’s story is so immersive and intriguing that it makes up for the lackluster game mechanisms. The characters, despite some only having short screen time, were all so strong and memorable. There’s no doubt that I’ll be checking out the second game Spirit Hunter: NG once my nerves have recovered themselves. But overall, this is one of the best horror visual novels I’ve ever played.

I actually hadn’t intended to order the limited edition of this game. But when I check on Amazon one day, I saw it was cheaper to buy it then get the digital copy from the Nintendo eShop. So I ordered it in October last year, and finally have had the chance to play the game and open all these goodies up! 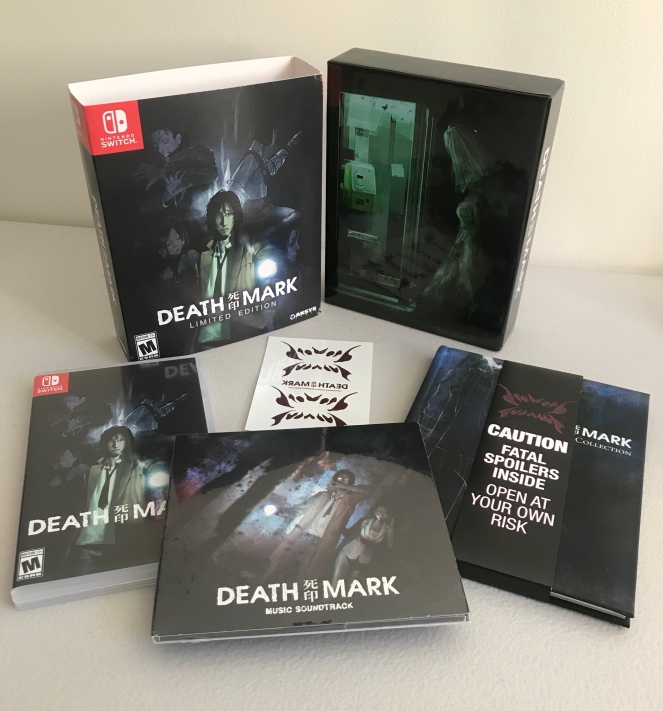 The Limited Edition comes with the a dust jacket for the hard cover box which features art from chapter 3 and chapter 6 of the game. Inside the box is the game, an art book, a CD with music from the game and stick on tattoos of the infamous mark.

I’m really glad that the hard cover box art had some of the spirits on it. I was a little disappointed that the game cover just had the mark bearers, it doesn’t look nearly as spooky. But my favourite things out of the pack is definitely the art book. It contains concept art for all the different characters, spirits, and locations. At the end there is more backstory on the Kujou family (who feature heavily in the game). In regards to the CD and tattoos, they weren’t ‘must haves’ for me. I don’t think I’ll ever listen to the CD, the music, like the game is very creepy. Although I might put on the tattoos for fun. I do wish they were stickers instead, might have had more use for them. But overall, definitely happy with all of these goodies!