Sword Princess Amaltea is an upcoming visual novel by Natalia Batista and Senpai Media Group. The game is based on a manga of the same name by Natalia, that flips traditional fairy tale tropes. In Sword Princess Amaltea, it’s the princesses that do the saving, and no princess is more kickass than Amaltea herself. Besides Sword Princess Amaltea, Natalia has had an expansive career within manga publishing. Her longer works have been published worldwide and shorter works featured in anthologies and competitions. TwoHappyCats had the chance to ask Natalia some questions about the upcoming game and her career as a manga artist.

Can you tell us how you first got into creating manga?

I’m part of the Sailor Moon Generation. They showed the anime on Swedish television during my early teen years and I was hooked! One of the first anime movies I saw was Studio Ghibli’s Princess Mononoke and the first manga I read was Urusei Yatsura by Rumiko Takahashi. I think these three titles have made a huge impression on me, because I wanted to create manga myself and made my first attempts when I was only 14 years old. I also notices how many of my main characters still remind me of those strongwilled, dominant, powerful and active female characters I found in the first Japanese works I read!

For many people having a manga published is something they dream of. Could you give us an overview of how you had Sword Princess Amaltea published, and if there was a pitching process, what was it like?

It sure was dream for me too, and Sword Princess Amaltea was not my first work. I’ve made several short stories before and after it, and also two longer mangas of 200-250 pages each. Getting Sword Princess Amaltea published in Sweden was easier because I knew the market a bit by then, since I was first introduced to it in 2006 and got signed with this fantasy manga in 2012. It was a bit of a lucky chance, since I knew a publisher that had recently started a fantasy comics line as part of his publishing company. He loved the concept of Sword Princess Amaltea and signed it. Still, I wanted it to be an International work at some point, so after the complete trilogy was out in Sweden, I started searching elsewhere. That was a bit more of a struggle, and especially with the American market. Thanks to a Kickstarter I made with a small publisher for an English edition of an older manga of mine (Mjau!) the CEO of Tokyopop, Stu Levy, messaged me and asked to see my other works. That’s actually how I got signed with them, so sometimes doing one thing can lead to something else great in this business!

I can see that your works have covered many different topics and subjects, from biographical immigration stories (Goodbye Sweden) to mermaid fantasy (Hooked on You, Mermaid Minna and the Secret Friend). Is there any fundamental theme that links all your works? Or something that draws you to certain ideas or topics?

I feel Hayao Miyazaki’s works, with their independent and strong-willed female heroes, have inspired me a lot, both as an artist and as a woman. That is what I hope to do with my works aswell, which most often have active, female main characters. I also want to stir the pot a little. Both manga as an artform and the genre fantasy in general have it’s stropes and stereotypes, which frustrates me and makes me want to turn things upside down. Like in Sword Princess Amaltea, where this fantasy world is ruled by women and men are considered the “weaker gender”.

Out of all your works, what was it about Sword Princess Amaltea that made you decide to make it into a game? 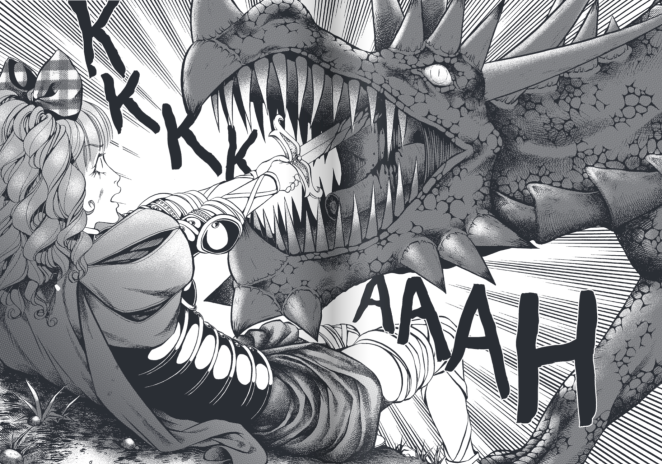 Sword Princess Amaltea is my longest work so far, and my most successful when it comes to International spread. It has been published in Sweden, USA, Germany, Italy and the Czech Republic, and has also become a pen-and-paper RPG book in Sweden (that I hope to translate to English one day). The story is set in a matriarchal fairy tale world and the genderflipped stereotypes are quite fun to play around with. I’ve noticed I most often get two kinds of reactions: either the reader loves it or they hate it. You might guess why and whom, in general, is the lovers and haters of this kind of story, haha. And this actually motivate me to go on. I’ve had young girls tell me how much Amaltea meant to them, and some men aswell! I still think this story and it’s world that I created has so much more potential, and that is why this Visual Novel game, a stand alone sequel to the manga series, is a perfect way for me and the reader to explore it even further.

How closely will the game follow the manga? Will there be something new for fans of the manga to experience?

Princess Amaltea is quite a memorable heroine from her spunky attitude to that adorable bow. What was the inspiration behind her? 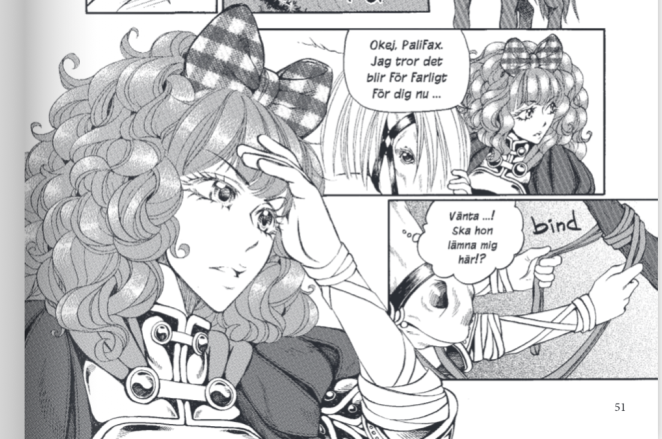 Sweet Lolita meets Ramna 1/2, haha. Truly, I wanted a kick-ass but egocentric and a bit naïve heroine, and to give her a boyish look was too expected. So by giving her a super-girly and adorable hairdo and bow, the contrasts makes her stand out. I think that’s a trick to all character designs; contrasts!

How different and/or similar have you found the creative process behind creating a manga and a video game?

There’s so many similarities! For starters, writing the scripts are quite similar, except when I write the script for a manga, I need to decide exactly what happens. When I made the script for the visual novel, since it includes interactive choises made by the player, I did not have to chose one story line – I could use several of them! It was so much fun! The tricky part was making the flow chart for all the choices and pathways, but that was actually a great experience and something I recommend more writers and story creators to try some day! 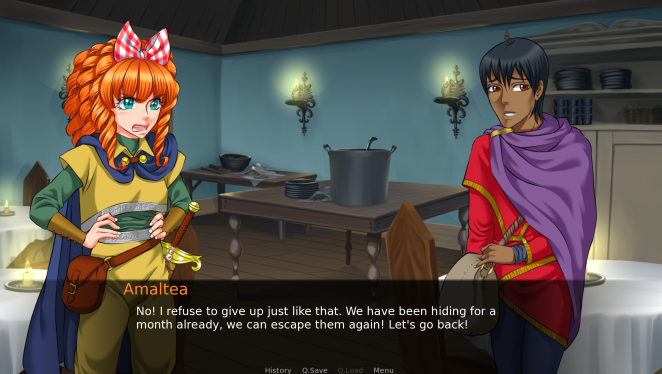 Making the art was also similar to making a manga, except this time I got to explore the world in full color, haha! And practice making backgrounds… oh, so many of them! The sprites of the characters was a fun thing to do, almost like very simplified animation.

I can see that the game has parallel story lines. Without giving too much away, how dramatically different is each story path?

The visual novel will follow the two main characters Amaltea and Ossian. They are royals on the run in this gender flipped fantasy setting, and thus easily get them selves into trouble all the time. Since they are two, I was thinking: why not let them get separated in the story, and the player gets to play only one. The other character will still have some things happen to them, based on the choises the player did subconciously before they got separated. They will join again at one point, and the result in the end will be affected not only by the active character’s storyline, but also by what happened in the non-active character’s storyline! This way, you want to play the game over and over to see not only the different paths of one of them, but of both, and what different decisions in the beginning affects the rest of the game.

I can’t come up with any other visual novel that have done this before, but if anyone knows of any, please let me know!

Playing through the demo, one aspect that really struck me is how detailed the backgrounds are. What would your creation process be like for each background?

Wow, thank you so much!! I would say that was my biggest weakness when I started, and I wanted to make them painting-like, similar to that of the backgrounds in anime. To be honest, I am still in the learning process so almost every background had it’s own process, but by the end, there was some kind ow structure to the madness, haha. The zoomed in backgrounds, like the dish-washing scene in Ossian’s path, was sketched out in CLIP Studio Paint on one layer, added shades with a soft watercolor brush in only grey tones, and then I added an overlay layer on top where I added the colors of each object. The more structural backgrounds, like scenes in the town Haybridge, or the panoramic scenes was first sketched out on one layer, then I worked with the parts in the picture on different layers depenting on depth. Front, middle, back, horisontal line, sky. This was acutally for a reason. We could then easily separate the layers and the coders used them to make the parallax effects that you see a lot in the beginning of the game. It give a more anime-esque feel to the game, I think.

For readers who wish to get into manga or game developing, is there any advice you can offer them?

Just do it! Today is the perfect time to just start making whatever you wish you could do, because there is a ton of great resources and materials online! It is all just a google search away. I acually built my own house with hemp, clay, straw and lime by just googleing, haha! (It’s up at my instagram, if you wanna take a look: @nataliasmanga)

I would recommend to start easy, though. Start with a short story of maximum 50 pages, with a complete ending. This is actually in my opinion more difficult than starting a long manga that never ends. The ending is the most important part, and you need to practice making it before you make you big epic stories. Also, make sure to have trustworthy and truly honest beta readers in everything you make. They are key to a good story!

How can fans help support you and Sword Princess Amaltea?

By spreading the information of the manga and the game. Also, support the Kickstarter for the game, which ends on the 29th of July 2020. I bet there’s a bunch of readers out there that would love to read the manga, play the game (the demo can be downloaded for free on itch.io) and get inspired by the gender-flipped world of Sword Princess Amaltea. I wish more people could read it and maybe make their own out-of-the-box stories that breaks the mold of how a manga or a fantasy story should look like!

Thank you so much to Natalia for answering my questions! I hope you all enjoyed reading through this interview and learning more about becoming a manga artist and game developer. Remember to check out Natalia’s game Sword Princess Amaltea. The Kickstarter only has nine days to go and there’s some really awesome stretch goals that would be fantastic to meet. Also, make sure to follow Natalia on her socials – Twitter, Instagram and her website.  If you’ve already played the demo for Sword Princess Amaltea, let us know your thoughts in the comments!