Coming hot off the exhilarating experience that was Death Mark, I was more than ready to jump into its sequel Spirit Hunter: NG. In this game you play as Akira Kijima, a sullen young man with a complicated family history. When his young cousin is spirited away by a spirit doll named Kakuya, Kijima is thrust into a game of life and death. To save his cousin, he’ll need to face the various spirits that plague H city. If he beats them, he’s one step closer, but if he fails he’ll never see his cousin again. 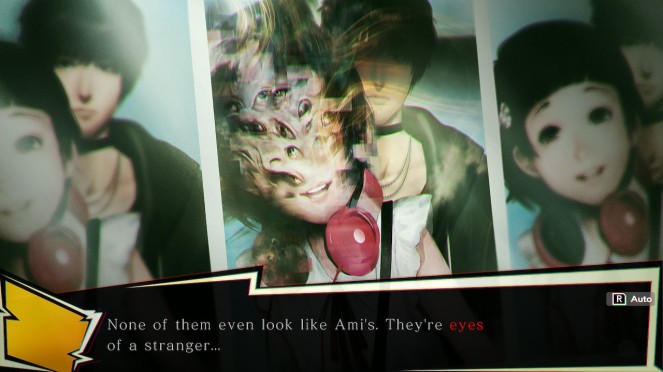 Available On:  Steam, Switch, PS Vita and PS4. I am reviewing the Switch version. 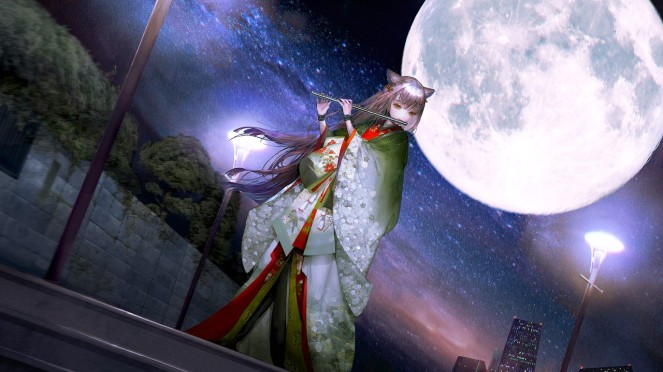 To start off, it’s difficult not to compare this game to its predecessor Death Mark, and in doing so the game is a let down. The story wanes, characters aren’t likeable and the art seems to have taken a step back. But I’ll do my best to judge this second entry into the Spirit Hunter series on its own merits. So, with that in mind, let’s start off with the game mechanics. Just like the previous game, NG features traditional visual novel dialogue selection, and also point-and-click detective work. During confrontations with spirits, you must choose the correction combination of items in association with the right parts of the spirit to either destroy it or purify it. The game also does feature two new features that I had a lot of fun with. The first is the reactions. Occasionally during the game you can choose a reaction to something another characters has said. While these are inconsequential to the actual progression of the game they can unlock character information in the gallery. Where dialogue choices and action choices have to be correct throughout the game or you get a game over, ‘reactions’ allowed players to put their own personal touch on Kijima. 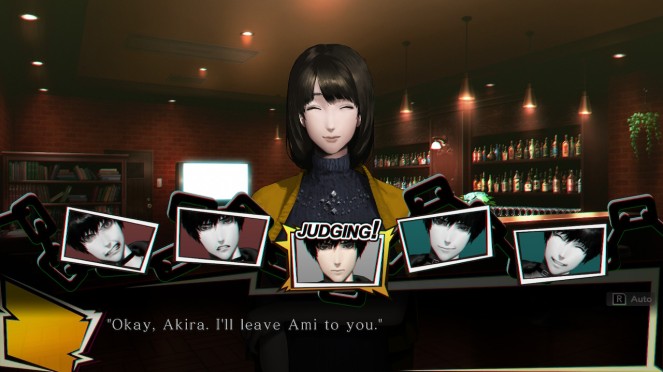 The second feature is this game allows players to select how scary it will be. There’s three modes players can select from – off, default and scary mode. These only affect the investigation mode. There’s a general default setting for spirit confrontations and other events. I played about 80% of the game in scary mode, and it was really quite creepy. There were a lot of sudden images and sounds, for example in chapter 1 when changing to a new investigation area a spirit moans and suddenly rushes towards you before disappearing. I mean, I ended up changing to off just because I wanted to finish off the game quickly and not get distracted. 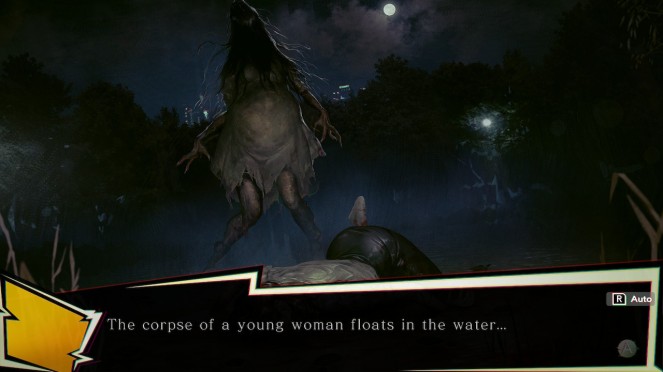 Just as I’ve talked about the game insular positives, let’s look at its negatives. Each chapter deals with a specific spirit, and truth be told while it isn’t as strong as the story in Death Mark, on its own it’s decent. The stories behind the spirits are interesting, and the game’s final twist was exciting.I think my key issue with the game was the interplay between the characters and plot.

To put it simply, I didn’t care about the characters. There was nothing about them that made me want to progress. Kijima takes on this ‘i am very badass’ personality trope, and while I can suspend my disbelief for ghosts and spirits it’s hard to do so for the rest of the NG cast. Key amongst the unbelievable is Amanome, Kijima’s childhood best friend who is also the son of a yakuza and carries around a gun and Hazuki, who moonlights as a famous occult themed pop idol. Having these high school age characters, who happen to have ridiculous backstories investigating the supernatural just was a bit too much for me to suspend my disbelief. Ultimately, it created a real disconnect in the playing experience. What I enjoyed most about the original Death Mark was that a majority of the people who had come into contact with the supernatural were everyday people, a student, doctor, otaku. It just made it more realistic, like the supernatural could happen to anyone, not just characters in a story. 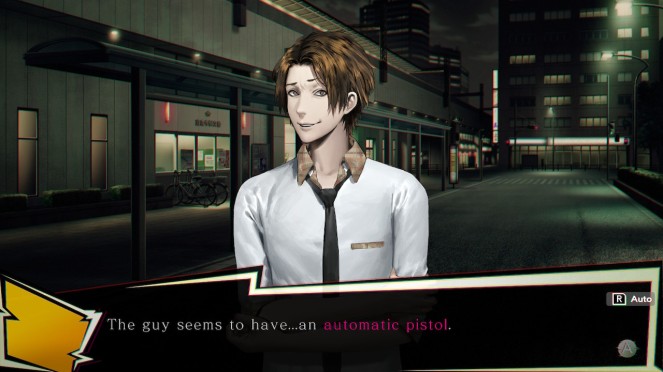 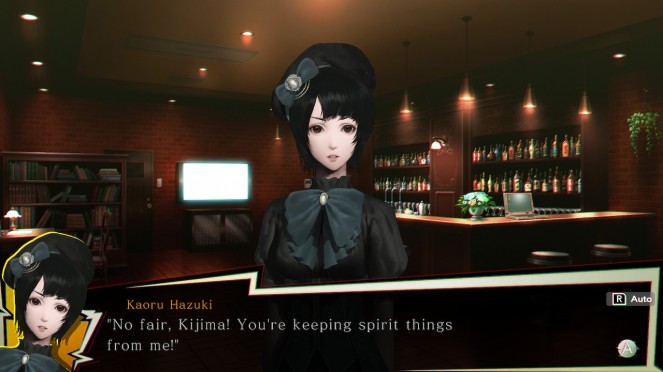 Speaking of a disconnect, the game also includes as mysterious character called D-Man who leaves Kijima mysterious D Cards as he continues his investigating. The cards often refer back to the characters of the first game, and I suppose are meant to be a hit of nostalgia. But they often left me scratching my head. I couldn’t work out what was the actual point of them besides distracting and detracting from the actual story that was unfolding.

The art in NG is absolutely stunning. Kakuya is a hauntingly beautiful visage in all her appearances, and the designs of each grudge filled spirit is enough to send shivers down your spine. But I did have an issue with one particular CG. That was the recurring side profile image of Kijima when the curse is activated on him. It’s just such a plain image in comparison to the intricate art of every other scene. For such a recurring and prominent image to be so bland, was a bit of a shock. It’s like they just shoved an unfinished CG in there because they ran out of time. 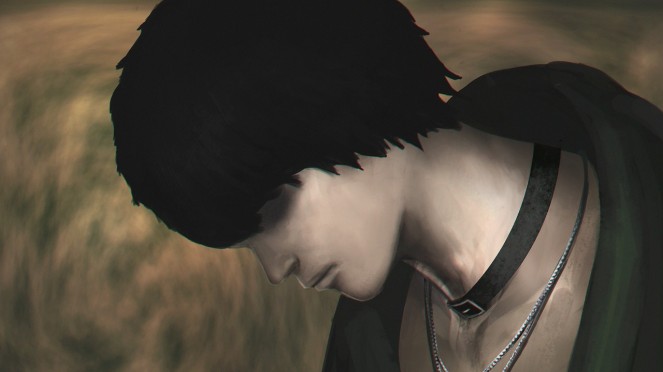 Now onto the comparisons. My two biggest complaints for the Death Mark game was in regards to the map and the game’s save points. I was incredibly happy to see these two issues fixed in this game. Save points come pretty much every couple of lines. You can save during investigations and at the end of every in-game day. The map can be expanded with a simple click and you can see the whole area – hallelujah! However, the game did bring one new frustration and that was with the notes sections. In Death Mark, the notes were written in full sentences and gave extra details to the story, especially once it was resolved. They often even contained hints, that were not explicit during investigations. In NG, notes were brief bullet points that were useless and added nothing to the story. 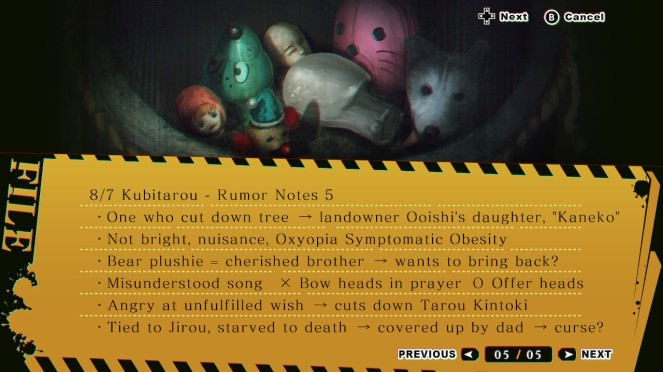 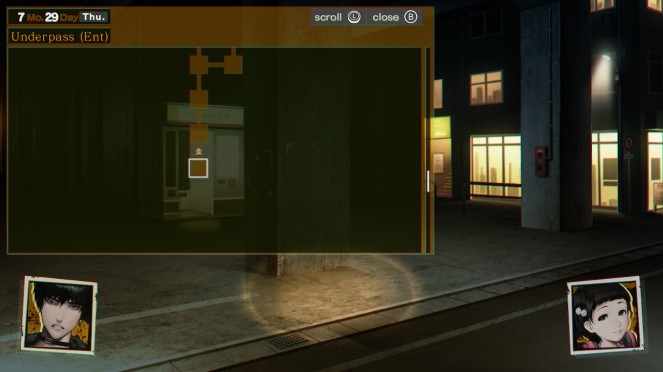 My final key criticism of Death Mark was in regards to its depiction of female characters, specifically in CGs of their deaths. For most of NG I had thought this problem resolved. I was only mildly irked by the character design of Mulan Rosé. I wasn’t sure if it’s just the way her dress was drawn, but it seriously looks like her nips were poking out. And once I saw that I couldn’t unsee it. But when I went back through the game to get a normal ending (only one spirit was destroyed instead of purified), I found the exact same issue I had with Death Mark. A female character has been murdered by a spirit. She’s inexplicably naked, her body bent over, with a giant pole going through her mid-section. Why is she naked? The spirit whose curse rebounded killed people by cutting their heads off, not stripping them. Just mind boggling. So kind of a two steps forward, one step back situation.

Overall, while NG standing on its own is a decent enough game, compared to Death Mark its quite lacklustre. The game’s story drags along with a disconnected cast of characters, and some areas are just not polished enough for the price tag. While there’s been some great additions to game mechanics and improvements to previous issues, it’s missing the charm of its predecessor. Perhaps without the ‘spirit hunter’ headline, I’d have been far more forgiving for the game’s faults. But as it is, it’s not a worthy follow up to Death Mark. 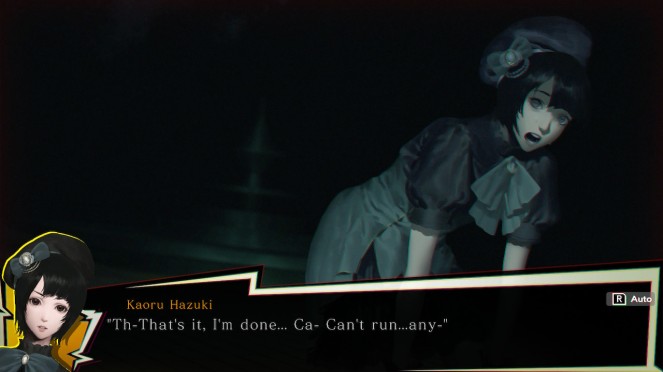