First loves can be tumultuous, intense and often short-lived. But for students Yuri and Aono even death won’t get in the way of being together. Just two weeks after dating, Aono is killed in a traffic accident but he returns to Yuri’s side as a ghost. What starts off as a sweet romance slowly evolves into something far more sinister. Slowly, Yuri and Aono come to realise Aono’s ‘revival’ is far more a curse than a blessing. I Want To Hold Aono-kun So Badly I Could Die is a manga by Shiina Umi, currently six volumes have been published by Kodansha, the following review is just for volume one.

I have to admit, I Want To Hold Aono-kun So Badly I Could Die completely blindsided me with its story. The rather shoujo-esque art, the blurb promising star-crossed lovers – just about everything pointed to a tragic, but kinda sappy, love story. And it’s especially easy to settle into the feel of that with Yuri appearing as a typical awkward and naive shoujo heroine. But while this manga is a love story, it’s anything but romantic. Yuri is almost fanatical about Aono, willing to kill herself after learning about his death. Aono on the other hand isn’t exactly Casper the friendly ghost. There’s an insidious side to him, a side he’s barely aware of and can’t control.

Of course this brings a lot of interesting dynamics and mystery to what could have been a bland story. And I really do have to applaud the mangaka for doing a unique spin on the same old ‘I’m in love with a ghost’ story by bringing in quite a few horror elements to it. However it is debatable how well this comes across with the series’ art style. Sometimes the simplicity of it really works in its favour and other times it leaves a lot to be desired. 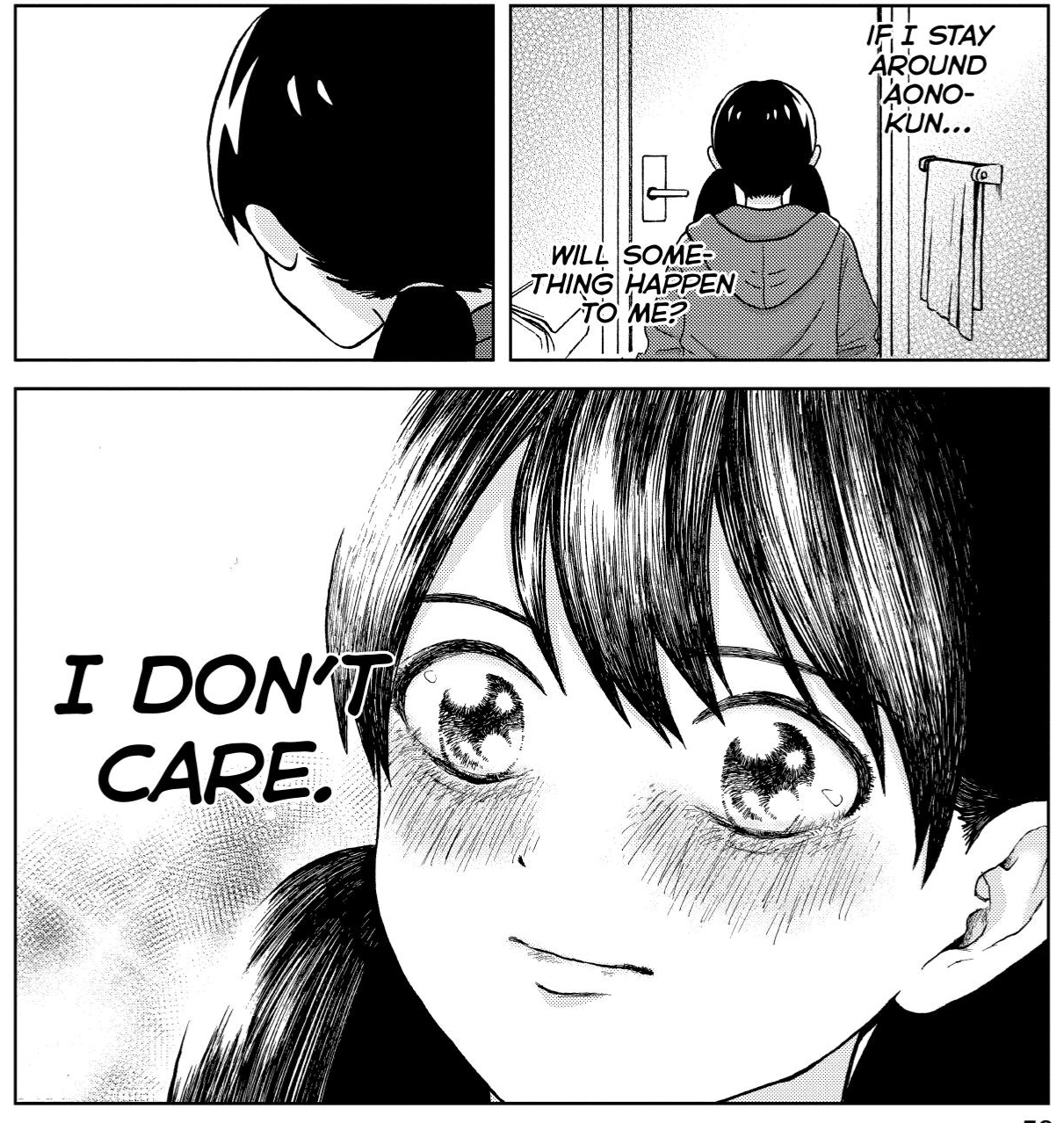 As the story progresses Yuri became quite a focus of my interest. As I mentioned above, there’s something obsessive with her love of Aono. She  seems not to care about the danger that she’s in because she’s just happy to be with Aono, like she’s trapped in her own fantasy.  There’s no doubt a reason for that, perhaps something in her home life, and I’m very keen for this to be developed and learn more about her.

But as the story progresses it does become increasingly uncomfortable to read, and it’s difficult to concretely say whether I actually enjoyed it. In volume one, a lot of the horror is based around Aono shifting between ‘good’ and ‘bad’, and the ‘bad’ Aono wanting to devour Yuri. In one of these scenes, actually half-way through chapter one, bad Aono ‘possesses’ Yuri. The scene is…there’s really no other way to describe it but quite sexually charged. But in a way that is incredibly confronting and uncomfortable to read. Once Yuri regains control of her body, her and Aono realise she’s bleeding – which Yuri believes is from her period. You see where I’m going with this.

But interspersed with these very confronting scenes are also scenes reminiscent of slice-of-life series. In one scene Aono teaches Yuri how to play piano and in another Aono goes inside a utility pole so that she can pretend to hug him. These scenes lull you into false sense of security before dialling the horror back up to one hundred. Reading this manga is almost like getting constant whiplash from the roller coaster of tone and content changes. 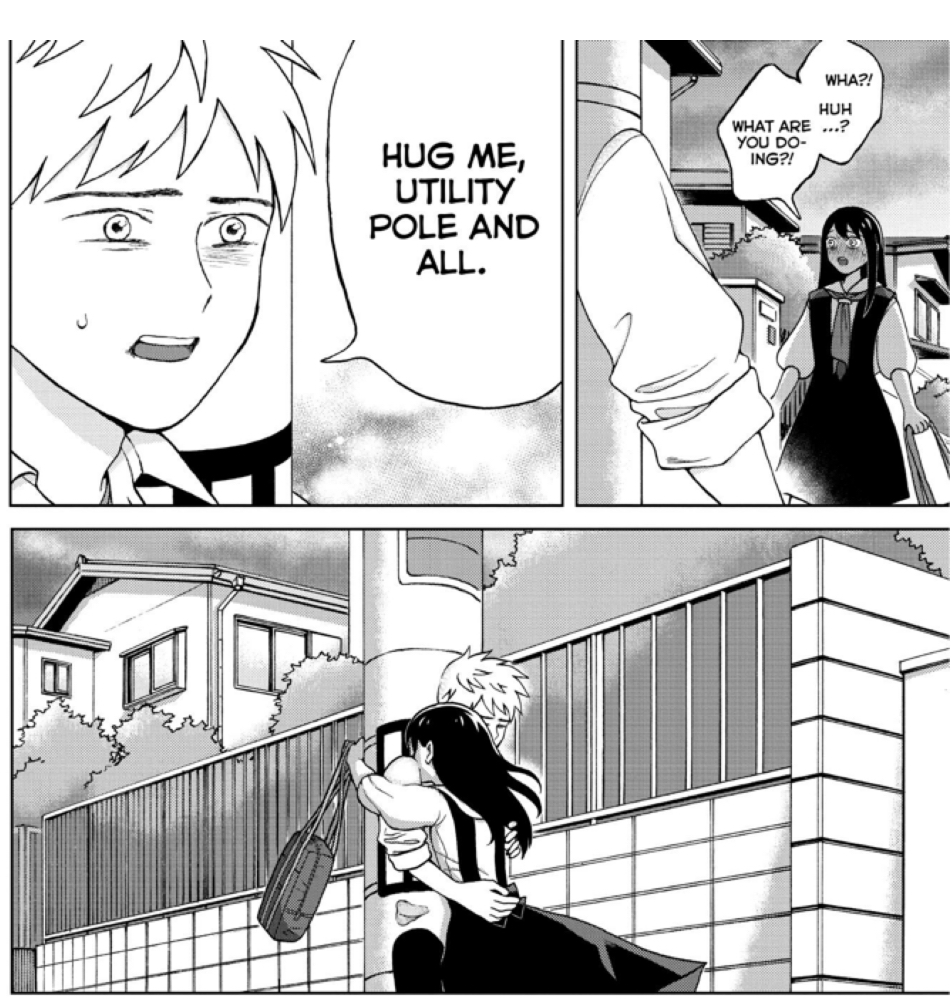 When I’m reviewing a series for this blog, it’s rare that I don’t have a solid impression from my first read. But with this, at the end of the first volume my head was spinning. I had to re-read this volume about three times until I could really come to a conclusion. While I still can’t work out if I actually enjoyed reading this series, what I do know is that it’s not for everyone. Scenes can often be uncomfortable to get through, and not everyone is going to hang around for Yuri’s future character development. But for me, I can say it’s sparked my interest. It’s a story unlike anything I’ve read before and I can only hope that future volumes answer my burning questions.

I hope you enjoyed this post, let me know in the comments what your favourite ghost romance story is!

Thank you to the team over at izneo for providing me with volume 1 of I Want To Hold Aono-kun So Badly I Could Die so I could review it.If you’d like to try out the manga yourself, volume 1 is included within the izneo premium subscription. You can also check out a short preview of the comic on their website.

5 thoughts on “ I Want To Hold Aono-kun So Badly I Could Die Vol. 1 Review”