Over the last few years a number of licensed online manga readers have popped up. Some are created by the publishers themselves while others are individual companies that host a number of licensed works on their platform. Nevertheless, there is now a lot of avenues for fans to legally access their favourite mangas and comics while also supporting the people who made those series possible. One such service is izneo. izneo has an expansive catalogue of manga, webtoons and comics. Some are available free, some paid to keep and some can be accessed within their monthly paid service. Today I’m reviewing izneo‘s paid subscription as well as reviewing how the service performs on my computer and as an app for my iPad and Nintendo Switch.

Before we get into the bells and whistles of the app, let’s see how it actually reads. Overall, I found the reading experience to be almost perfect across all devices/ modes. The reader allows users to choose between reading one page at a time or a two page spread. Personally I actually really liked using the two page spread, especially on my iPad when I could hold it horizontally. The reader also allows you to toggle the background to be white or black, which I guess acts as a night/day mode.  Across all devices you can also zoom into the images, which are very high quality. I did notice there was a bit fo a ‘flash’ or delay when moving between pages but I soon got used to it.

However, I did find there wasn’t a 100% seamless transition between reading on your iPad, Switch or Computer. If I was reading something on my computer, and then picked up my iPad I would have to re-search for the manga. Thankfully once you re-found your manga and selected the correct volume it does pick up automatically. But I think it would be great to have a ‘read on other devices’ tab so you don’t have to go searching for things. 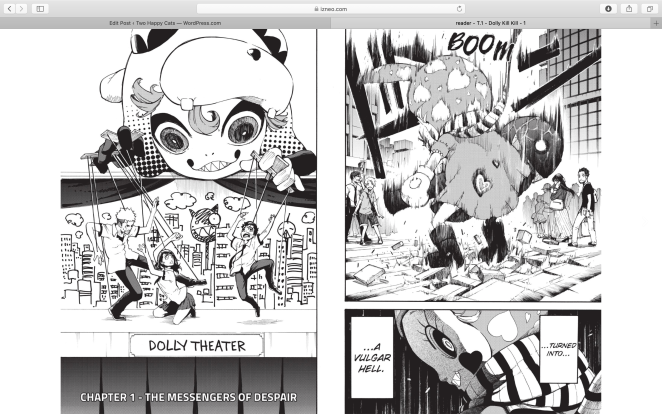 Yes, you can see I’m currently writing a post from my open tabs as I’m reading a manga!

One thing I would love to see implemented in izneo is a filtering feature. Across all devices, I found it incredibly difficult to discover new manga, as there isn’t really any sort function for selecting genre. On the website the main ‘manga’ page has genre headings of  ‘Shojo’, ‘Yaoi’, ‘Erotic’ and ‘Adult’, but izneo has a bunch of action and shonen manga such as Berserk and Battle Angel Alita which you can’t find within these On the iPad app, there is a section where you can click onto genre tags but more often than not when you do you’re greeted by a blank page. On the Switch the only genres that are selectable are ‘Shojo’ and ‘Action/ Adventure’. This stops users from being able to truly explore and utilise all of izneo‘s catalogue. 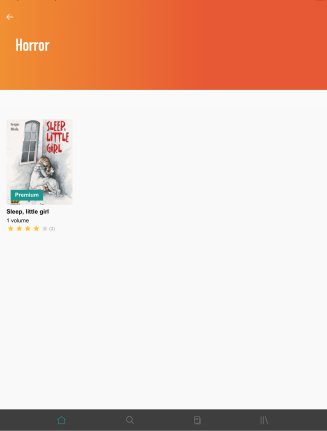 There is quite a decent variety of manga available on the izneo app, with a great balance between popular series and some hidden gems. Some examples of popular titles I’ve seen include Attack on Titan, Fairy Tale, Fire Force, Your lie in April etc. However for many of these titles only the first few volumes will be included in the premium subscription and the rest you will be required to pay.  For example, of Fire Force’s 19 volumes, 5 are included in premium. While I’m sure we’d all love for the whole series to be available, I was very content with what there was available especially for big name series.

Generally, I found that way the premium was sent up allowed me to have a  ‘taste test’ of a number of series that I had interest in, but didn’t want to take the plunge in buying an individual volume for. With this in mind, I can definitely see how worthwhile the subscription can be.Unfortunately, you can’t tell what series (and what volumes) are included in the premium subscription until you sign up. 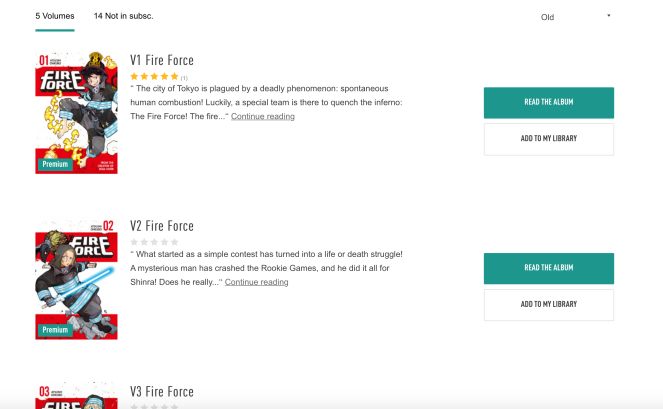 What I did notice when searching for series was that sometimes izneo might miss a volume in their catalogue. For example, a few weeks ago I reviewed a series called I Love Aono-kun so Badly I Could Die. The first volume is included in the premium subscription but the rest are not. When I went to buy the other volumes (as I was interested in the series) I noticed they only have volumes 3, 4 and 5 available. No volume 2. I noticed this with a few series when I started digging, I’m not quite sure why some volumes are missing but I can imagine it might be frustrating for readers who start purchasing a series only to find some of it isn’t available. 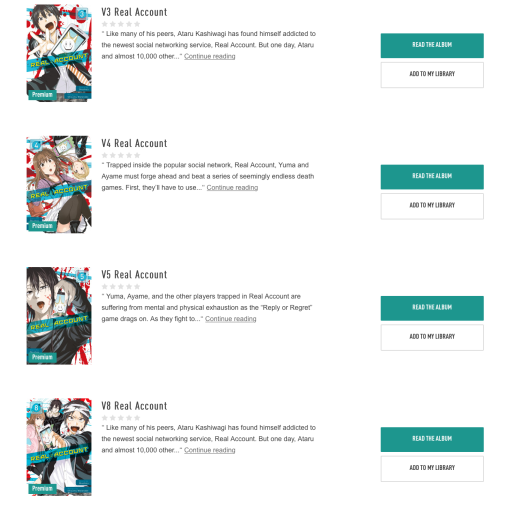 As you can see above, izneo has volumes 1-5 & volume 8 for Real Account but volumes 6 & 7 are missing

How it runs on:

Of the three modes, I found the izneo website the easiest to navigate and search for titles. I found it quite smooth to scroll around, find something I’m interested in and then click ‘read album’. I really did not encounter any issues with the website, and had quite a positive experience reading on the manga reader. 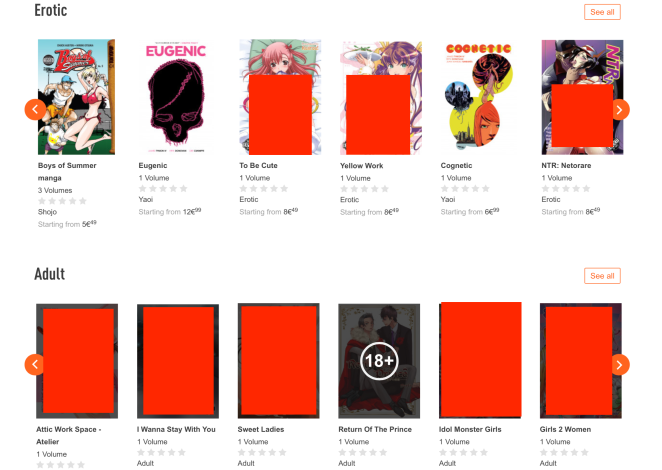 As the app seems to have a way between switching between the ‘store’ and ‘premium content’, I think it would be great to change this to switching between ‘regular content’ and ‘r18 content’. Funnily enough, I could only find this mature content on the website. There was no mature or r18 content available on the iPad or Switch app (that I could find).

I’ve always enjoyed reading manga on my iPad, of course this was no different when using the izneo app. I enjoyed being able to switch between landscape and portrait especially when choosing between one or two page view. As I mentioned briefly above, at times while using the iOS app I would click onto different pages such as ‘genre’  or click to see more ‘top reads’ and I would be met with a blank page. This made navigating the app quite difficult. So what I ended up doing was exploring the catalogue on my computer and once I had decided on a single series to read I would then switch over to my iPad to actually read it.

While at first I loved the idea of reading manga on my Switch I actually found it the most challenging to use. If I hadn’t used the app for a few days, I would be signed out and have to log back in. I also found the app did not make use of the Switch’s touch screen. It would have been great to flick through the catalogue but instead I had to use the buttons to navigate and read manga. I also felt like I couldn’t use the Switch as my main reader as I had to download manga to be able to read them (unlike the computer and iPad). Due to storage issues this wasn’t always a possibility for me. 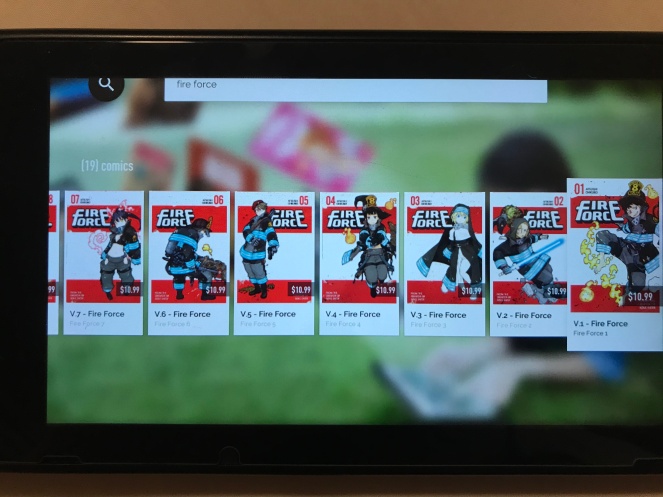 However my biggest problem with the Switch app was that it did not clearly label what content was premium and what was paid on the main areas of the app. When I searched for a series, such as Fire Force on the search it showed up as costing $11, it’s only when you click into it you can see a section that says ‘download this comic’ to show it’s part of the premium plan. On the computer and iPad comics which are part of the plan are clearly labelled as such.

Instead to see what is under the premium content you need to select ‘premium’ from the side bar and then scroll through about 2415 titles (a mixture of comic, webtoons and manga). There is again no way to filter this, you just scroll until you see something you like.

Overall, I’m pretty excited by the izneo app and can see that it has a lot of promise. I really enjoyed using the manga reader to read out series, and as part of the premium plan I was able to check out series I may not have if I had to purchase them individually. However, there are quite a few kinks that need to be worked out. Notably, a way to sort genre and showing what is premium content on the Switch would significantly improve the app’s usability. But, regardless of these challenges, it’s definitely worth trying out izneo yourself with the one month free premium subscription.

Thank you to the izneo team for providing me with premium access for one month to review their product.