After a premiere episode that left me with mixed feelings, I started Akudama Drive‘s second episode with a bit of anxious anticipation. But, as the episode unfolded, I was pleasantly surprised. The episode starts off shortly after the explosive collars are placed on the team. Their mysterious client-turned-captor has a second task for them, one he’ll pay 1 billion yen to have completed. Once they find somewhere ‘safe’ to talk, they learn that their next job is to take down the shinkansen and steal cargo off it. Of course, in a world as vibrant as Akudama Drive, the shinkansen isn’t any ordinary bullet train. But the team are more than up for the challenge!

I’m probably going to sound like a broken record each week, but the scenery in this show is honestly breath taking. There’s so much detail put into each shot of the city scape, you can honestly get lost in it. One thing I’m really appreciating with Akudama Drive is the film references. As many watchers will notice episode one was titled SE7EN, the same as the 1995 film. This week’s episode is titled Reservoir Dogs, a 1992 film. However references don’t stop just there. This week’s fight scene is reminiscent of one in the 2012 Bond Film Skyfall.  I really gotta applaud the attention to detail and can’t wait to pick up more references!

Perhaps what I enjoyed most about this episode was that it really spent the time to flesh out some world building. We learn that the Shinkansen is worshiped by the people of Kansai. As well as bit of historical background to the world. There was a war between Kansai and Kanto, leaving Kansai in an almost subservient position to the supposedly prosperous Kanto. Normally, I’m not a big fan of ‘info dumps’. But here it kinda worked as the video we watch is a piece of propoganda that the rest of the characters probably see each day (I believe the ‘video’ says it airs 23 times a day). It also brings in a lot of questions about what the mysterious client is actually aiming for with the Akudama team. Is he aiming for chaos, revolution, fame – or all of the above? Last week, I mentioned that I wasn’t completely sure of the Swindler/ Ordinary Person character. This week, she’s grown on me a bit. But now my concern has shifted from her to ‘Cutthroat’. At the end of last week’s episode he was the character I was most interested in and now I’ve just got sirens going off in my head. In one particularly cringe scene, he licks blood of Swindler’s cheek. I don’t think I even need to write the many, many reasons that is beyond gross.

On the plus side, we’re introduced to  two new characters in the form of ‘executioners’. I loved their character designs, and they really are an extra interesting addition to the cast. I might be stretching it with the film references but…did anyone else feel like their weapons were a bit like lightsabers? Even the sound effects were similar! Anyway, I really do hope we get to see more of them. But between them and the very strange Cutthroat, character-wise, this series is still a bit of a mixed bag. 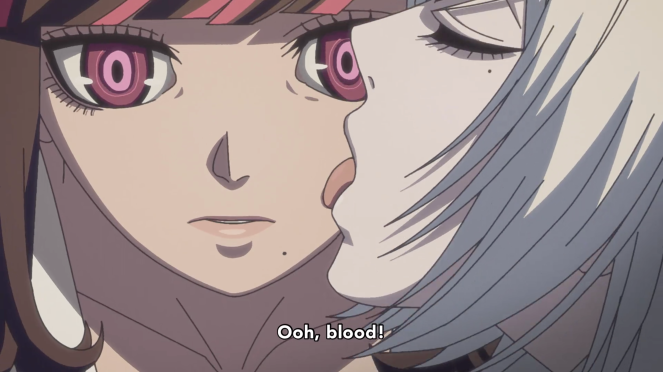 Couldn’t have said it better myself

After watching episode two of Akudama Drive , I can definitely say I’m a lot more excited for the series. While still not sold on the characters, the world building and plot are definitely headed in the right direction. I just hope the series manages to maintain its course and doesn’t go completely off the rails.

Missed the episode 1 review? Check it out here!