Over the last two years, I’ve become increasingly interested in figurine collecting. One of my favourite companies is Kotobukiya, and if I could, I’d probably buy all of their figures. But today, in the spirit of Halloween, I wanted to focus on one of their lines – the Horror Bishoujo Series. The series recreates famous horror characters as beautiful girls. Currently I only own one figure from the line (Pinhead from Hellraiser) and have Pennywise (IT) ordered and on its way to my grubby little hands. So without further ado, let’s get into what horror bishoujo is, my thoughts on the line and hopes for the future.

Kotobukiya is one of the leading figure companies in Japan. The company produces a number of different products and lines, there’s model kits, figurines, gacha toys and general goods. The company was established in 1953, and over the last 67 years has solidified a reputation of quality merchandise at reasonable prices. Kotobukiya’s figure catalogue is incredibly diverse, featuring character figurines from Marvel & DC comics, anime, films (Star Wars, Alien etc.) and games (Dead by Daylight, StreetFighter etc.). So many franchises have been brought to life (or figure still life) through Kotobukiya‘s figure lines of which their ‘Bishoujo’ line is my favourite.

The Bishoujo Series first began in 2009, the idea of the series – to reimagine characters as beautiful girls. The first character the series took on was Marvel’s Black Widow and from there the series has featured characters from DC, Marvel, games and films. Most of the Bishoujo designs are created by main designer Shunya Yamashita who has a very distinct style of big eyes and soft, full lips. Then in 2014, the series took an interesting turn releasing a sub-line under the title ‘Horror Bishoujo’.

In the ‘Horror Bishoujo’ series famous horror film characters are, just as with the rest of the bishoujo series, reimagined as beautiful girls. In 2014, the series kicked off with the Freddy from Nightmare on Elm Street and Jason from Friday the 13th. As of writing this post, sixteen figures have been released / planned to be released. So far, these figures are focused on American horror films and recreate the main villain of the film. The only characters that aren’t villains are the Edward Scissorhands figure released in 2016 (although the film isn’t quite a horror) and the Ash from the Evil Dead, figure released in 2018.

My Thoughts on Horror Bishoujo…

As I mentioned in my intro, I currently own one figure from this line – Pinhead from Hellraiser. I have just paid for my Pennywise order and am so so excited to receive it. From my own figure as well as looking at YouTube and web reviews of the others in the series I can say the quality is pretty incredible.  The paint job is really quite exquisite and there’s so many little details to enjoy. For example, Pinhead’s fingernails and toenails have drips of blood, and damn the flow of her dress! My only complaint, specifically with the Pinhead figure, is the pins in her head are about 3 times too big. I would have much preferred thin pins that don’t completely obscure her face. 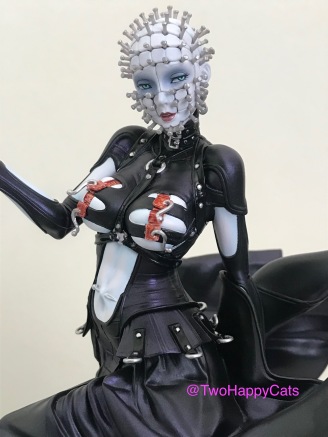 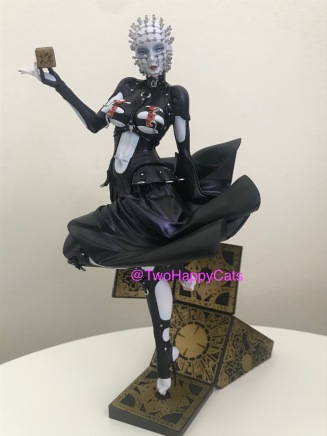 Personally, I find the figure designs can walk a very fine line of being tasteful and not. I understand the point of the line is to make the characters look ‘attractive’, but as a horror line they should still look intimidating. For example, while Jason does appear in the Friday the 13th films with quite tattered, ripped and damaged clothes, I did question the way the holes are done in the figurine’s jeans. Every time I see that giant hole right up to her thighs, I just imagine how bad the chaffing would be if she was running through the forrest, hunting someone down.  Some can even be quite gratuitous, such as the upcoming Leatherface figure, her hands above her head and her boobs literally popping out of her shirt.

However, please don’t think me a prude. I do love some of the really sexy figures in the line. For example, the Ash Williams figure. Ash’s ripped clothes make sense because the figure is based on Evil Dead 2: Dead by Dawn in which the character Ash’s clothes actually do get ripped apart. Actually the whole Evil Dead franchise has a history of trying to get Ash’s clothes off, I mean just look at that cover for the Army of Darkness film. So I can 100% appreciate how this was replicated in the figure. So, looking at Ash’s figure I absolutely adored her design! Quite simply, I appreciate the figures more when they are in line with the characters and franchise and not just designed as sexy for sexy’s sake. 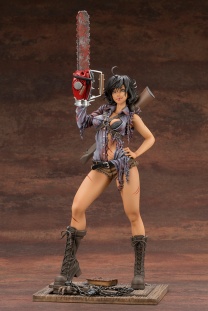 Over the last six years of Horror Bishoujo, the prices have also increasingly gone up. I’m a bit mixed on this as the initial 2014 Freddy and Jason figures had a very basic base – just a splatter pattern which was magnetic. These figures were sold for about 7500 yen*. The bases specifically have grown more elaborate over the years for example Ash’s has the infamous trapdoor (sold for 9000 yen*) and Beetlejuice with the gravestone (12000 yen*). While I would say the quality of the figures themselves have remained roughly the same. Figurine collectors have noticed increasing prices for figures generally so this price increase over the years for this line could just be following the market trend. 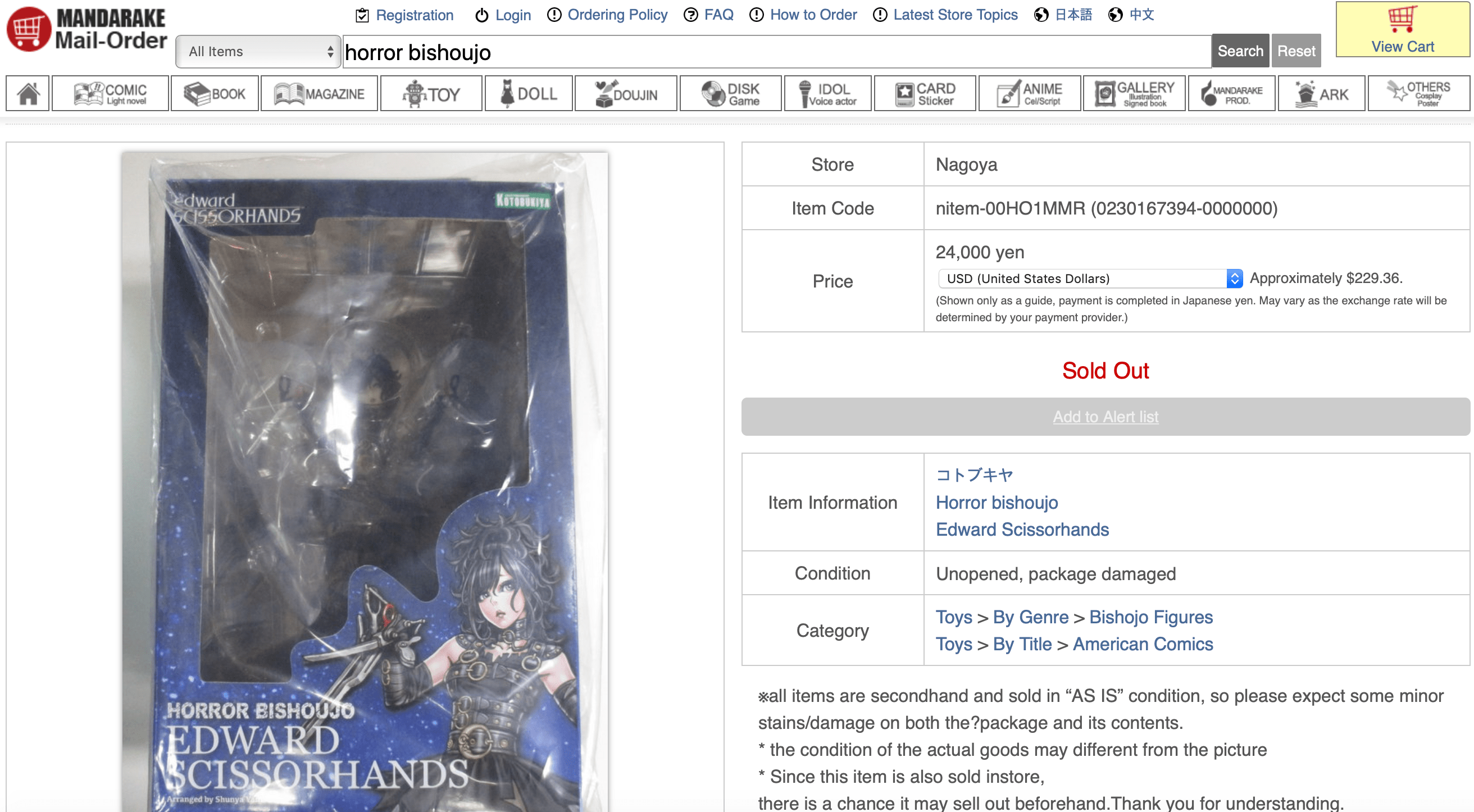 In the aftermarket most of these figures tend to retain their value and some even double (or more) in price. For example the Edward Scissorhands figure first sold for 9000 yen but was sold on Mandarake for 24,000 yen  and another for 21,000 yen. Manadarake prices can fluctuate over time and differ depending on the store the figure is at, but I’ve always seen this figure in particular resold at quite high prices. Figure prices especially go up if they include a Kotobukiya pre-order exclusive such as a different face or a limited edition variant (specifically the Ash Williams Limited Edition). There are some figures I can only hope for a re-release of as I know I’ll never be able to afford them secondhand – the true nightmare of a figurine collector.

Hopes for the Horror Bishoujo Future…

My main hope for the series is that it’ll branch out to other horror movies besides restricting itself to American films. I’m surprised they haven’t done any character from Japanese films. I mean, how creepily cool would a Sadoka (The Ring) or Kayako Saeki (The Grudge) bishoujo figure look!? It’d also be interesting to see how the Babadook from the Australian film The Babadook would turn out.

However, if I ever had the chance to talk to the Kotobukiya team and Shunya Yamashita directly, here are some Horror Bishoujo figures I’d love to see in the future and would buy in a heart beat.

Of course these are just my personal ideas, and I am more than aware some, if not most, of these have zero chance to be made. But I thought it’d be fun to share my own ideas. 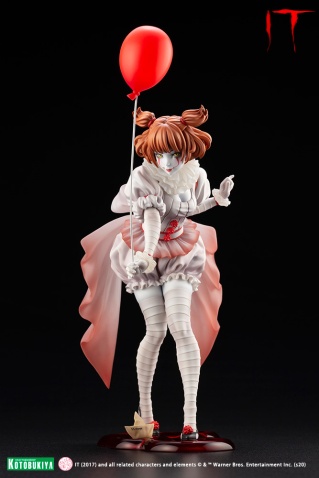 Not only as a fan of horror movies, but as a figurine collector, Kotobukiya’s Horror Bishoujo line has me obsessed. It’s such a fun line, and I get so excited seeing how they recreate iconic horror film characters in their own unique way. While not all are to my own taste, I can’t help but admire how well crafted they are and how much detail is put in each figure. I hope one day I’ll be able to see even more of my most loved (and feared) horror characters in this series, but for now, I have to get back to hunting down what’s not currently in my collection!

I’d love to hear in the comments what horror movie characters you’d love to see reimagined in the Horror Bishoujo Series!

** Images for this article, unless specifically noted, were taken with permission from the Kotobukiya Website