One of my favourite childhood memories is sitting in the playground with friends, huddled over our Tamgotchis. We’d be feeding it, cleaning up its poop and comparing the various evolutions we’d ‘unlocked’. But, most importantly, we boasted about how long we’d managed to keep our digital pet alive. I haven’t been super tuned into the Tamagotchi scene since then, but over the last few years noticed that the Tamagotchi brand has had some very interesting releases / collaborations. In 2019 there was an Eevee Tamagotchi (originally sold for about 2700 yen I’ve since seen it resold for $150+ AUD) and recently an Evangelion Tamagotchi. So it’s no surprise that the hugely success Demon Slayer franchise was next on the Tamagotchi collaboration list, And no surprise that, through a combination of Demon Slayer love and Tamagotchi nostalgia, I dropped $50 AUD on one.

The packaging of my new digital slayer is pretty simple. In the box you get the Tamagotchi and a manual. The manual is in Japanese but the Bandai website has an English translation available (select the ‘instructions’ tab at the following link and click the pdf). The game doesn’t have any writing in it, all the buttons are symbols you can select so after quickly reading the English guide you shouldn’t have any problem navigating. 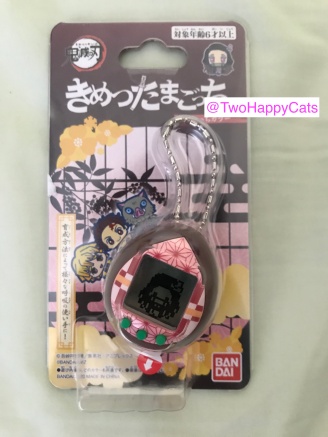 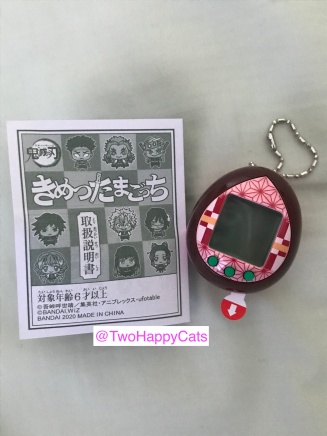 As you turn on your Tamagotchi you’re greeted by some familiar scenes, indicating that your baby demon slayer has passed their final selection. Now it’s up to you to train how they turn out. Your demon slayer can be fed onigiri or drink hot tea and be trained in three different exercises – rock cutting, gourd blowing and medicine throwing. Thankfully you don’t need to clean up any poop but randomly throughout the day (and mostly at night) demons will show up and you’ll need to defeat them otherwise your poor slayer will get injured. If your slayer is injured for too long, well, they die. As you play your original demon slayer will either evolve into one of the three main characters (Inosuke, Tanjiro or Zenitsu), or one of the nine hashira. There’s also a special character that I haven’t unlocked but I’m guessing it’s Nezuko.

In Australia, currently, there’s two case versions you can get – Nezuko or Tanjiro.  But I believe in America you can also get an Insouke, Zenitsu and a generic slayer one. Later this year, the nine hashira cases will be released. According to the tamagotchi fandom page, these are a different version to the current one and will feature new animations, games and demons.  As there were only two choices in Australia, I ended up picking up the Nezuko one, but I do wish I had waited to grab the second version’s Shinobu. It’s such a pretty design! Nevertheless, what case you get has absolutely no bearing on how your slayer will evolve, version differences aside, it’s mostly for aesthetics. 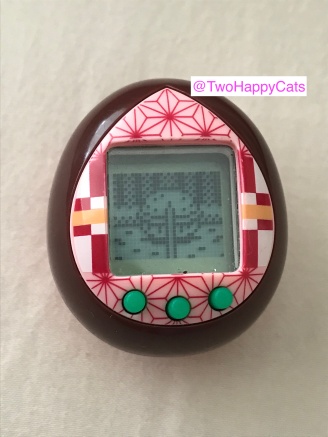 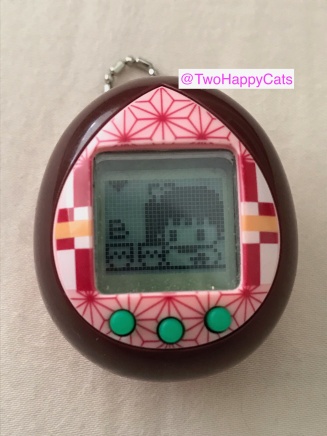 Now, let’s get to the playing.  As outline above, the actual gameplay is pretty limited. But I had a lot of fun playing the mini-games, especially ’gourd blowing’ (where you repeatedly press a) when I was at work. If I had a stressful phone call, I’d take it out and start pressing like a digital stress ball. But, probably one of my favourite parts of the Tamagotchi is the ‘crow messages’.  A crow will appear on screen before showing a small vignette of other characters. This plays out as a pixellated cut-scene from the anime that plays on screen such as Kanao holding up a butterfly or Haganezuka racing towards you. It was just a very cute callback to the series. However, in terms of ‘evolutions’, I felt a bit let down. Perhaps, it’s mostly my fault but I tended to leave my Tamagotchi alone for a few hours (especially when I was working) but it seemed it had been programmed that if you ‘neglected’ it, it’d automatically evolve into Inosuke. Over the last three months I’ve had the Tamagotchi, I’d say about half of the time my slayer has turned into Insouke. Look, I like Inosuke but god I’m sick of seeing his pixellated face.

Additionally, the Tamagotchi is very very small. And look before you go ‘oh but Tamagotchis are for kids’ so they’re made small for their tiny hands (or whatever),  here’s my circa 2004 and 2006 Tamagotchi I had when I was a kid vs the Demon Slayer Tamagotchi. It’s minuscule in comparison! The Demon Slayer Tamagotchi, along with the other ‘collaborations’ are under the Tamagotchi Nano line. I honestly can’t imagine why they would want to make the screens smaller on a Tamagotchi – production costs? But regardless I really wish we had gotten a normal sized Tamagotchi. It’s quite difficult to see the screen, and I’m probably showing my age here but I was squinting a lot while playing. 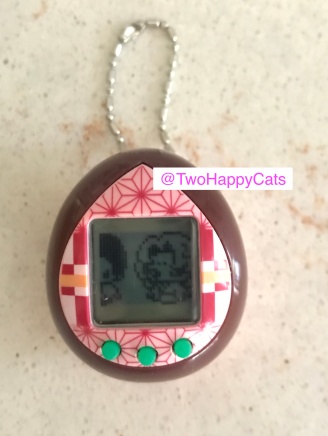 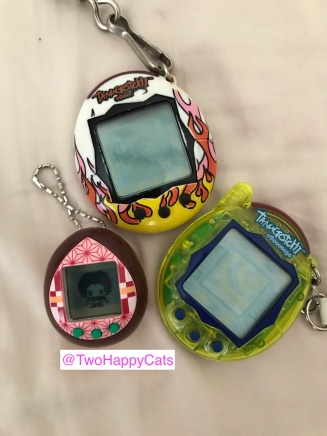 In summary I’d say that the Demon Slayer Tamagotchi was a fun gimmick, but not one worth $50 AUD. I enjoy carrying it around and messing with the mini-games now and then, but I definitely wouldn’t go out of my way to buy version two. Perhaps for people who really love Demon Slayer and also enjoy Tamagotchis, that might find this a fun collectable item that they can enjoy long term. And while I’ve certainly enjoyed playing it almost daily over the last three months, I can’t definitively say it’s a worthwhile purchase for anyone outside of that niche overlapping group. It’s more something you’ll have fun with for awhile before putting it in a drawer and forgetting about it.

8 thoughts on “Demon Slayer Tamagotchi Review – To Buy or Not to Buy?”