All her life, Sarah has wanted to act on the stage, and when she finally lands her first role she can’t believe her luck. But the production of her dreams isn’t all that it seems to be, mysterious accidents occur and when a ghost appears to tell Sarah she’s in grave danger, she has to decide whether the role of a lifetime is worth actually risking her life. But despite devious plots, a strange investigator and a handsome spectre, the show must go on! The Last Act is a mystery-romance visual novel by indie developer Snowhaven Studios, who previously released works such as My Sweet Confession and Once Upon an Electric Dream. Now, let’s go make sure this isn’t the final curtain call for our heroine! Content Warning: There was nothing that particularly stuck out to me that required a warning (no gore, no jump scares etc.) 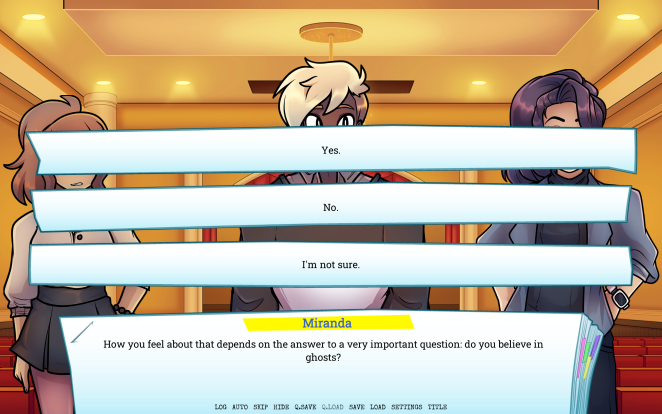 The Last Act is a visual novel, and as you play through as Sarah you make a number of dialogue and action choices that influence your path and how the mystery unfolds. Choices will also influences whose romantic end you will unlock, between skeptical co-star Joshua, adorable ghost Silas and mysterious PI Gavin. In fact, I think this game has the most choices out of any game I’ve played, and I have to seriously applaud how each choice really does significantly alter how the story progresses.

My first play through of the story I managed to choose every single wrong answer leading to a bad ending, but following a guide on my second play through I could see how different answers provided new information to the overall mystery and a chance to spend more time with the characters. One moment I’d be learning more about Silas  and his death, and the next focused on theatre director Miranda and Alisha’s rivalry, each scene providing breadcrumbs leading to to the tantalising conclusion of the theatre’s mystery. As you all know, I am an absolute sucker for ghost stories, and this one was definitely a tight and suspenseful ride!

Of course, as with any visual novel, the art is important and I really adored the character sprite art and CGs! For the sprites, I really enjoyed how they moved across the screen and their changing facial expressions (especially Joshua’s occasional side eye). For the CGs, they were really impactful to key moments in the story but I I do wish that there were a few more CGs. A bulk of the CGs were for Silas and I really wished Gavin and Joshua had a few more. In fact, Joshua only has one key / romantic CG which is such a shame for such a cute love interest!

On a separate note, I really enjoyed the music of this game. I found out from the Snowhaven Studios twitter account that the game’s music was custom made for the game. It’s such a fantastic addition to the game and compliments each scene, I’m so glad they decided to have the music done. It should be no surprise that my favourite song is Silas’ theme which is just so hauntingly beautiful and really captures the character, you can listen to it here!

Unfortunately, as the game is so short, besides Silas, there wasn’t much time to develop the other love interests (Gavin and Joshua). As I played through their ‘routes’, I found it difficult to really pin down their full personalities and connect to them. In a way, I feel the game could have benefited from either cutting them out all together and focusing solely on Silas or spending more time developing these character, and thus extending the game. Personally, I really would have loved an additional scene or two with each of these characters to really showcase who they are outside of the theatre mystery.

For example, rather than Silas explaining his past, Sarah and Gavin could find remnants of his possessions in the theatre. During the investigation, Gavin could open up and tell Sarah how and why he became an investigator. Or, while Joshua and Sarah practice lines / go and investigate Alisha, we could learn more about his theatre passions. Additional scenes such as this wouldn’t break up the flow of the story at all, and rather, would build up stronger backgrounds for Gavin and Joshua to make their romantic scenes more engaging. Overall, The Last Act, was a charming mystery game. The exciting story, adorable art and charming music all tied in to create a great game. However, the game itself is quite short and something has to give with such a tight story, and unfortunately that was the characterisations of the two other love interests Joshua and Gavin. Nevertheless, I had a fun time playing The Last Act and I look forward to the other works Snowhaven Studios has in store.  You can keep up to date with the Snowhaven Studios team at their Twitter or website.

Thank you to Snowhaven Studios for providing me with a copy of the game to review!