While I do have two cats, I’m not blessed with particularly affectionate ones. One of my cats is a very aloof and the other is a true princess, so while I love them both very very much, I am sometimes in dire need of some adorable cat affection. Unfortunately, living in Sydney, cat cafes aren’t a big thing. I had previously visited Sydney’s Catmosphere cafe(twice actually) and was left a bit wanting from the experience. But I recently re-connected with an old University friend who suggested we meet up at a recently opened cat cafe – the YUMIAO Cat Cafe.

The YUMIAO Cat cafe is located in Waterloo, to get there you can catch a train to Central or Redfern and take a bus from there, it should only be a 10 minute ride. From the bus stop, it’s just around the corner. There are a number of time packages you can choose when booking the cafe, we ended up going with the $26 1 hour session which included a drink. While you do have to book in advance online, it’s not necessary to pay up front, and my friend and I paid when we arrived. Our session was at 10am and we arrived pretty much on the dot. 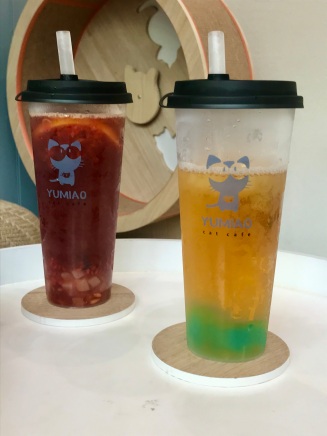 Before going to the cafe, I had looked on the website at the drinks menu to see what i would like. I had assumed with the drink included it would just be something easy / cheap like a coffee or hot chocolate. I remember at Catmosphere they offered just basic hot drinks (which I remember not tasting all that good). I was really surprised when I found out that for the drink, I could choose anything on the menu including iced and milk teas. I ended up getting a large ice oolong tea which was worth about $6, making the actual session with the cats only $20! Not bad at all!

Once your drinks are ordered someone at the cafe came around to give us coverings for our shoes and explain the rules of the cafe. The rules are pretty straight forward, essentially don’t harass the cats. Then we were let into the cat area of the cafe, and I was so impressed by how it was set up. It literally looked like a cats paradise, with climbing equipment fixed to the walls, beds and towers put together and lots of toys. Everything was so neat and orderly! My friend and I were the first people in our time slot and we quickly sat down to hang out with two kittens (Salt and Pepper). Within a minute of sitting down one of the kittens jumped into my friend’s lap and began purring. 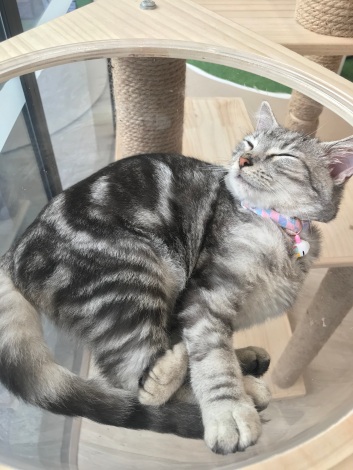 As more people joined the time slot, my friend and I moved to the end of the room. Unfortunately none of the cats were too interested in going to the end of the room so we had to go in turns to walk where the cats were congregating in the centre. So if you do go, make sure to get a good spot in the centre of the room and stay there! The staff at the cafe were incredibly friendly and attentive to the cats. They often came into make sure everyone was having a good time and tell us some facts about each cat. Overall the experience was very relaxing.

I think what I appreciated most about the cafe was that there were a lot of areas for cats to ‘hide away’ / ‘escape’ if they didn’t want to be around humans. For example, one cat was really shy and after spending a few minutes with the group climbed up and just watched us from a place they felt comfortable from. 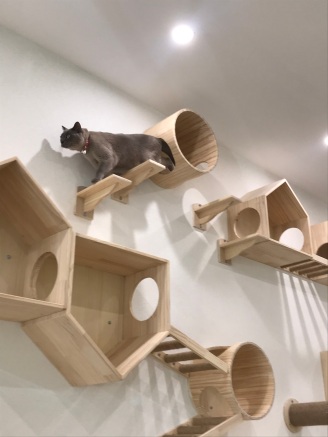 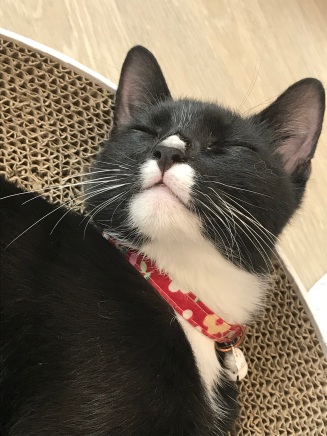 Overall, I had a fantastic time at the Yumiao Cat Cafe. If it wasn’t for the location, I would be going there almost every weekend. The experience was really relaxing and you could tell how much the cafe workers loved the cats. I really hope to visit again soon and maybe next time one of the cats will go in my lap!