A couple of years ago I used to be really into subscription boxes and I reviewed a few on this blog. But while I still love the idea of a subscription box, the shipping to get it to Australia almost always makes me balk at ordering it. However, I do still follow a few companies on Instagram and Twitter and when I saw YumeTwins advertising their April Yume Slayer box with a Demon Slayer theme. I knew I had to order it. I haven’t had a YumeTwins box for quite some time, in fact the last time was when they sent me a box to review way back in September 2017. So I thought it would be a good chance to also see how the company has changed. I ordered the month to month box (as I only wanted the April box), which was $35 USD plus $12.50 shipping, totalling $47.50 USD .

I ordered my box quite last minute on 26 March 2021. After ordering there was a notification saying that my box would be shipped in 3 business days. After about a week my box still hadn’t been shipped so I contacted YumeTwins and they explained that there was a delay and that boxes ordered after 20 March wouldn’t be shipped until 30 April due to high demand. They also included a screenshot of a notification that was on the checkout screen which honestly I completely didn’t see. I think other people must have missed the notification too as over the coming weeks I saw a few people comment on their Instagram posts about not receiving their box and feeling anxious about it. Perhaps it may have been good to just send out an additional email to people who ordered after 20 March to remind them. 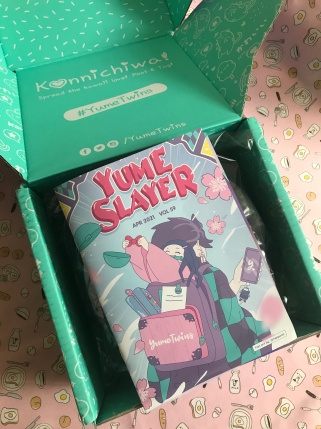 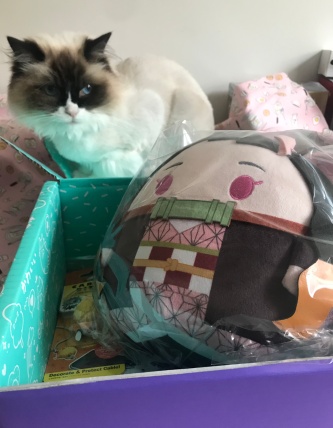 I’ll be honest, when I first opened the box I was a tad disappointed. I honestly thought that the entire box would be Demon Slayer themed. So when I saw that only the items which had been advertised and I knew about were the Demon Slayer items and the rest weren’t I was disappointed. I did see another YouTuber complain on the same point and a few commentators did say that YumeTwins never said the box was all Demon Slayer so it was unreasonable to have such an expectation. I actually went back and looked at the YumeTwins Twitter promotion posts and did find one stating “Don’t miss April’s box, a celebration of anime and manga” and another that said “You’ll love our manga & anime inspired box!”. The box was also marketed as the Yume Slayer box.

So out of my six items, only three of them were anime and manga related and those three items were focused on Demon Slayer. So while I can concede that expecting it all to be Demon Slayer may not have been completely accurate. I think it was fair to expect that at least a majority of the items would have been anime and manga related or ‘inspired’ but only half were. So with that in mind, let’s check out what was in the box!

Obviously I really love the Demon Slayer items and am really happy with what I got. The Nezuko plush is part of the Fuwakororin line (M size) and I’ve been thinking of picking one of them up for ages. It’s so soft and such a high quality product. I’ve already got it on my work desk and it’s just so darn adorable. I’m also happy with the Zenitsu cable biter, again, it’s already on my charger. The tenugui cloth is fantastic, but I’m not too sure what I’ll be doing with it. I may have to buy something so I can hang it up and display it properly. 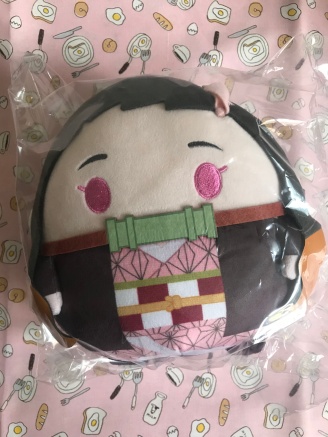 In terms of the non-anime items  – I think the magnetic bookmarks are great, and I’ve already started using one. I always like getting practical items in these boxes. The pencil case I think is cute and would have loved if I was still studying, but now that I’m working and everything is digital it’s really not useful for me. 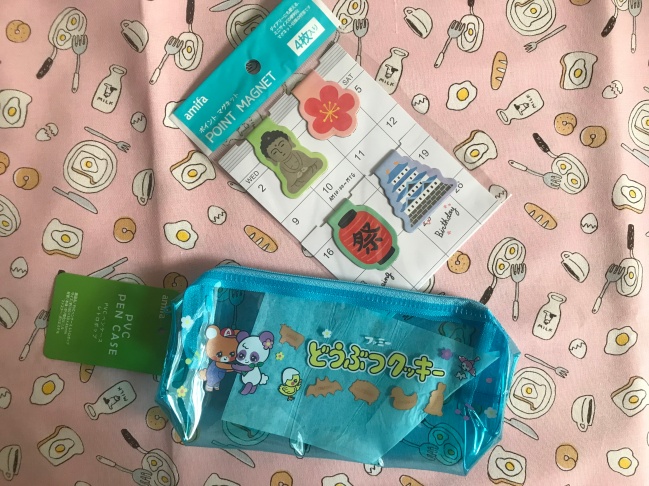 I do have to say I was really disappointed by the gachapon item. On first look it’s kinda cool like a portable retro game, but when I turned it on I realised I had no idea how to play it. And the instructions are in Japanese. I watched a few other people unbox their April boxes and it seems everyone got random gacha (i.e. they weren’t part of the same set). For example, I saw one YouTuber get a mini ice cream machine and another a Pokemon stamp. So I seemed to have just drawn the short straw. I’ve been thinking of just giving this item away or chucking it in the bin. I really won’t use it at all. And going back to the ‘anime & manga’ theme, it would have been really easy to thrown in an anime gachapon.

Ok with all the items out of the way, let’s check out the value for money. The Yume Twins box cost $47.50 (including the $12.50 shipping). For some items I could find them on Amiami or a similar item on another store, and I rounded to make calculating a bit easier. I also found out that the company YumeTwins is part of also has a site called Japan Haul where people can purchase specific items. The Japan Haul site has the individual items from each box including the Yume Slayer one. So I put in brackets what the Japan Haul site valued each item at.

I estimated the total worth to be: $40 USD 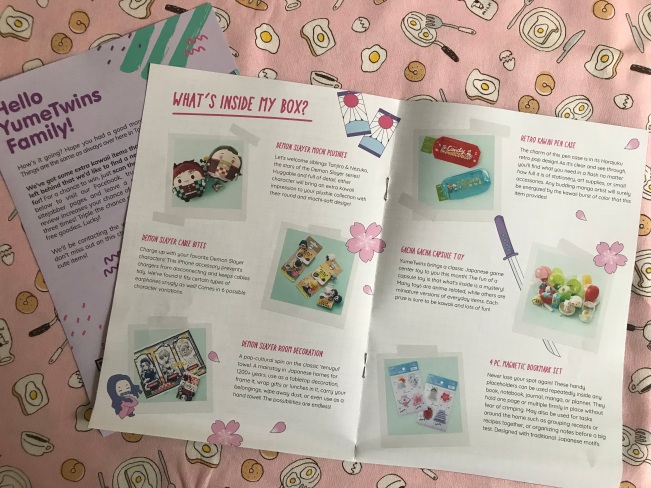 I can’t deny the worth of the YumeTwins box. You definitely get your value for money but the question becomes if you actually like what’s in the box. As I said above, I adore the Demon Slayer items, they’re such good picks and the book magnets I will definitely be using. The pencil case I could take or leave, but I feel especially disappointed with the gachapon. But like I said, other people seemed to have gotten better gachapons so I just got unlucky. Overall, I have a bit of mixed feelings about this box and probably would be a lot happier if it had a majority of anime & manga inspired items (as I felt had been advertised) rather than half/half.

Again, back to the YouTube comments I did see someone say that it was good that YumeTwins didn’t make the whole box the anime/manga themed as some subscribers may not like it. And if you ‘skip’ a box when you’re on a subscription plan you break your ‘streak’ and can’t get certain rewards. I don’t know much about the steak program, but I had a quick look at the website and it’s true. Which doesn’t sound like the best system. You should be able to skip boxes without messing up your streak especially if you’re not keen on the theme. Imagine being the opposite of me, and getting this box because you need to keep your streak up and hating Demon Slayer!

I will say, YumeTwins does usually have a quick turn around for ordering, so reviews and unboxing of this box were already available before I actually ordered. But I was hoping to give myself a nice surprise and didn’t watch them. But in future, I definitely will so that I have a bit more of an idea of what I’ll be getting (even if it takes the surprise element out of it). So final thoughts – all the items felt like great quality picks but not everything had me jumping for joy.